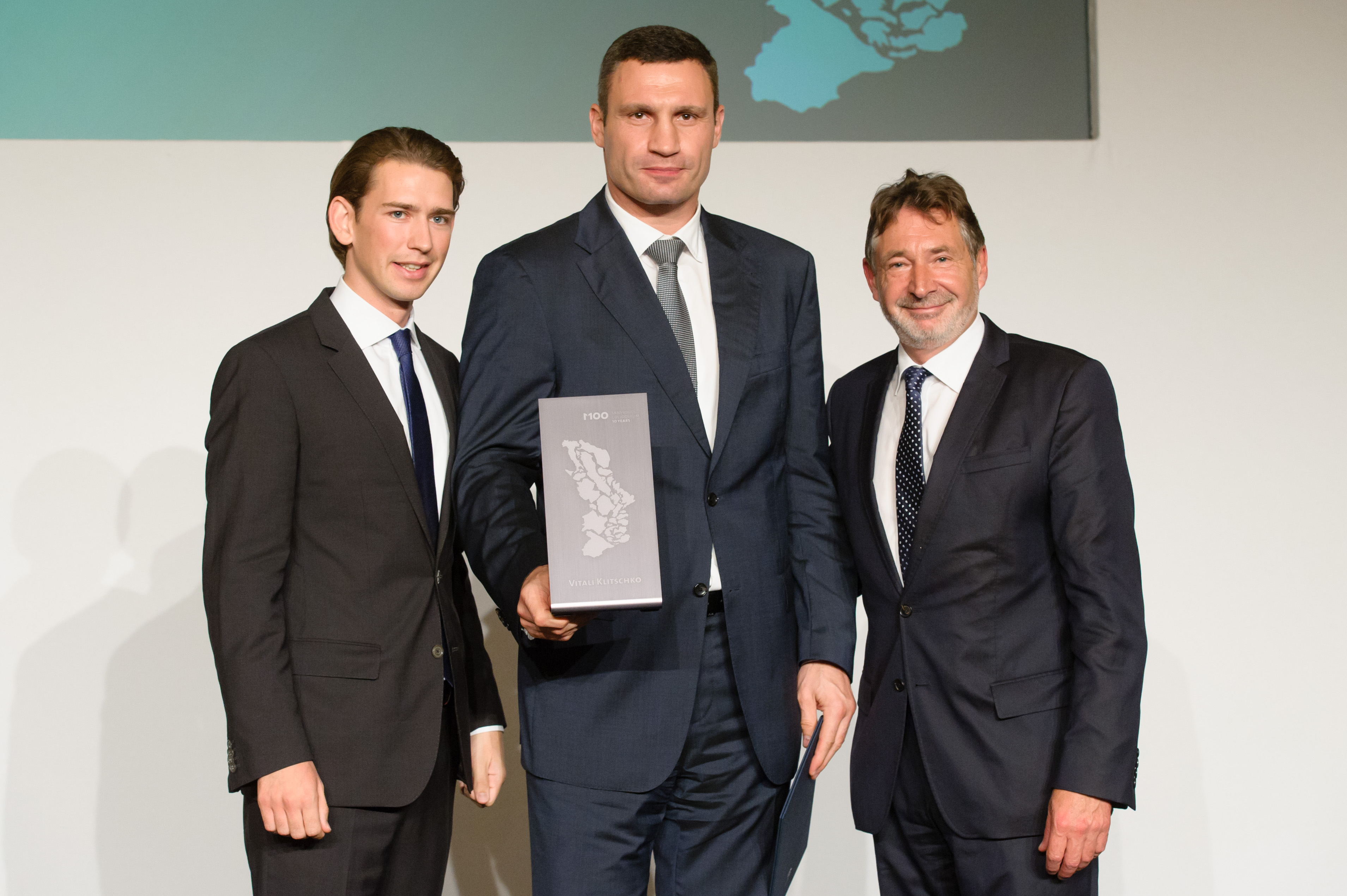 Vitali Klitschko was presented the M100 Media Award 2014. The M100 Advisory Board is conferring this award on Klitschko in recognition of his engagement in the democratic transition of his country Ukraine. The symbolic prize will be awarded in the evening of September 12th at the end of the M100 Sanssouci Colloquium international media conference in the Raphael Hall of Sanssouci Castle.

Special Award for YanukovychLeaks
A special prize is being presented to the Ukrainian group YanukovychLeaks. This group, comprising activists and journalists, recovered thousands of documents which former President Janukowitsch had sunk in a pond on his property prior to fleeing the country. In presenting this award, the Board is honouring the outstanding achievement of salvaging this enormous number of documents, systematising and analysing them, and then publishing them on the YanukovychLeaks website, thereby exposing the system of corruption operated by the former President.

The former professional boxer Vitali Klitschko is now actively engaged in the democratic transition of his home country, the Ukraine.  In 2006, Vitali Klitschko decided to run for the office of Mayor in the Kiev local elections, as well as for the Ukrainian parliament. In 2010 he was elected as leader of the pro-western party “Ukrainian Democratic Alliance for Reform” (UDAR), and has been the party’s Chairman since 2012.

Vitali Klitschko played a crucial role during the Maidan Protests, both nationally and internationally. He was the face of the largely pro-democratic opposition which achieved the dismissal of former President Viktor Yanukovich. Consequently, on May 25th 2014 Klitschko was elected Mayor of Kiev with an absolute majority (54,7%).

„During the last month Vitali Klitschko has been committed to the democratic transition of his home country Ukraine”, explained Potsdam’s Lord Mayor and Chairman of the M100 Advisory Board, Jann Jakobs. “His part in the peaceful conduct of the protests and demonstrations cannot be overestimated. He is the most prominent face of the democratic opposition; personalising the protests of Kiev for the Western world. With his courage and persistence, he raised worldwide awareness of the progress of the demonstrations. Vitali Klitschko is being honoured not only as a representative of all the democratic European oppositions of Maidan, but also of all the democratically oriented movements of the Ukraine.”

Vitali Klitschko was born on 19 July 1971 in Belovodsk, Kyrgyzstan. He is a Ukrainian politician and the current Mayor of Kiev, head of the Kiev City State Administration and leader of the Ukrainian Democratic Alliance for Reform and a former Member of the Ukrainian Parliament. He is the former WBC, WBO and The Ring magazine heavyweight champion and has been conferred as Champion Emeritus by the WBC. Klitschko is the first professional boxing world champion to hold a PhD.

He first became WBC heavyweight champion in 1996. After an injury-imposed break in his career, in 2008, almost four years later, he made one of the biggest comebacks in the history of sport. Forgoing a preparation fight, he went directly head-to-head with the incumbent WBC heavyweight champion, Samuel Peter, over whom he claimed an early victory. With this impressive success, both Klitschko brothers were then World Champions at one and the same time, ensuring an entry into the sports record books. From July 2011 the world championship titles of all world-boxing associations were united under the name Klitschko. On 16 December 2013 WBC named Vitali Klitschko Champion Emeritus.

Outside of sport, Vitali Klitschko began pursuing a political career in Ukraine as of 2006. In his hometown of Kiev he ran for Mayor for the third time on 25 May 2014 and won in the first round with 57 percent of the votes. Since 2010 Vitali Klitschko has been chairperson of pro-West party UDAR (strike).

During the Euromaidan protests Klitschko played an important role. He stood as a figurehead of the opposition, served as a contact person to leading international politicians and negotiated a compromise that provided for new elections and a restoration of the constitution. On 29 March he withdraw his candidature in the presidential race in order to throw his support behind that of current president Petro Poroschenko.
In 1996 the Klitschko brothers created a foundation to support underprivileged children. The Klitschko Brothers Foundation is especially active in AIDS prevention and in the fight against drugs. Children and youths should be given a better future. In addition, he and his brother Vladimir support the Ein Herz für Kinder (A Heart for Children) initiative.

The M100 Media Award annually honours a personality who has left his or her mark in the world. The award reflects their service to the safeguarding of freedom of expression and the deepening of democracy as well as their outstanding achievements in promoting European understanding and communication.