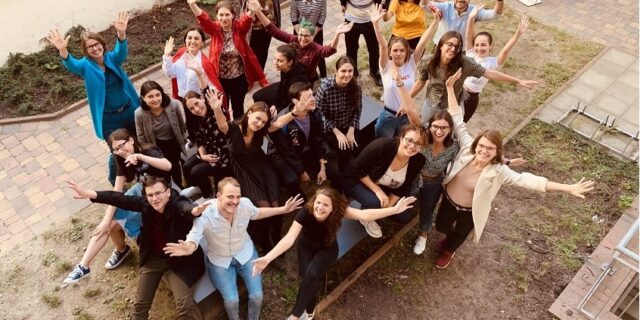 4 July 2022. Thank you for the numerous applications for this year’s M100 Young European Journalists Workshop on Fake News and Disinformation!

We have got great applications from many incredibly talented young journalists from all over Europe which will not make our selection easy. Unfortunately, we can only invite 20 of them to Berlin and Potsdam from 10 to 15 September – that will be a tough decision-making process!

We will inform all applicants about our decision by 15 July!

In our six-day M100 Young European Journalists Workshop, which we are organising in cooperation with the Friedrich Naumann Foundation, we want to teach participants how to recognise #fakenews and how professional fact checkers and platforms like Facebook deal with the growing flood of false news and disinformation. How fake news is dealt with during the war, how it is recognised and how it is combated and what is needed for this. What role traditional and social media play. What dynamics they develop and how journalists and fact-checkers in trouble spots and in various other countries in Europe deal with them.

END_OF_DOCUMENT_TOKEN_TO_BE_REPLACED

23 June 2022. We are delighted to be partnering with eupinions, the European opinion research project of the Bertelsmann Foundation, at this year’s M100 Sanssouci Colloquium.

In the run-up to the conference, the eupinions team will run a Europe-wide survey on the current status of trust in democracy and journalism, as well as on the role of the EU in the world and by what means and instruments it should fulfil this role. The results will be presented by Isabell Hoffmann, founder and co-author of eupinions, at the M100 Sanssouci Colloquium on 15 September. 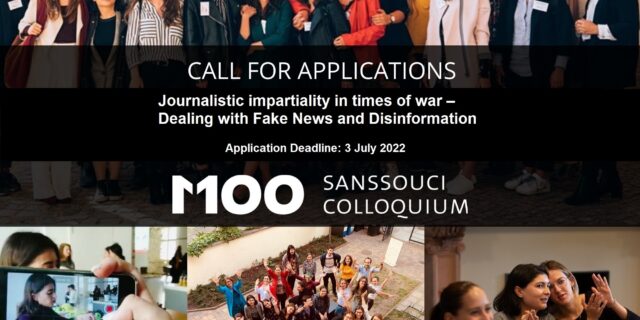 END_OF_DOCUMENT_TOKEN_TO_BE_REPLACED

22 June 2022. Konstantinos Koulocheris works as a data analyst in London.

“The Russian invasion in the Ukraine highlights the necessity for the EU to carefully pick its partners and prevent striking any kind of trade deals with regimes that are evidently a threat to its borders. Following evidence of aggressive behavior since 2014 in the Crimean Peninsula, the fuel and energy dependence of a whole continent to a regime that invades foreign territories proved to be a major mistake with catastrophic consequences for European people”, he writes.

Konstantinos participated at the M100YEJ in 2013, which influenced him to focus on media and politics in a professional path and where he met his wife, Anna. More about Konstantinos here. 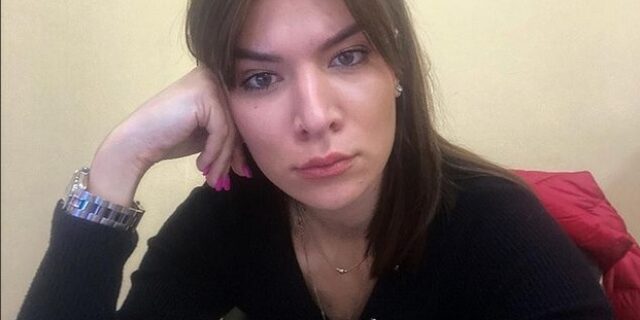 “We as a public broadcaster had it a little easier than the private media. But we also need visibility on an international level, because as you can see, attention and also support is decreasing. And maybe closer international cooperation between journalists, editors and civil society representatives can have a positive effect.

What we are also worried about are the narratives that have appeared recently in western media. Some journalists and public figures were trying to convey an idea that to stop the war, Ukraine has to cede its territory. Our goal as journalists is to prove them wrong. And we would also need Western society’s help in it.”

“We have English-language content, photos, videos and many special projects about the war, and I think it is very important to share it with other media. But we lack contacts, and I see M100 as a bridge that can help us reach these people. We need to be loud about Ukraine. The war is disappearing from the covers of international media. Our aim as a journalist community is to bring a voice about ongoing situation and make the Ukraine topic visible even if Europe got used to it.”

We are supporting this important call to all western publishers and media houses! If you want to contact Ukrainian independent journalists and editorial offices, please contact us!

9 June 2022. Key sentences of the discussion with Zakhar Protsiuk, Co-Founder and Managing Editor of The Fix Media, Ukraine, on 8 June on Zoom. The discussion was moderated by M100 Advisory Board member Christoph Lanz, Head of Board Thomson Media Germany as well as Trustee of the Thomson Foundation and former Managing Director of DW TV. You can watch the recording of the one-hour discussion here.

• Before the war in Ukraine, The Fix Media was an outlet and knowledge hub for media managers. It started as an as a project inside a consulting company called Jnomics. The Fix is a relatively young organization which was founded less than three years ago.

END_OF_DOCUMENT_TOKEN_TO_BE_REPLACED 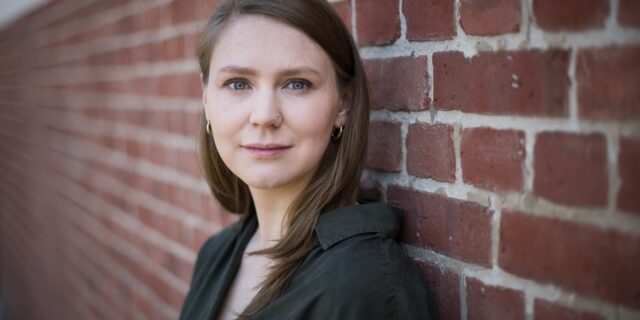 However, Finland and Sweden have been everything but neutral in the past decades. The countries are clearly aligned to the West, and have built some of the most equal social democracies in the world. Sweden and Finland joined the European Union in 1995. Both have been NATO partners since the 1990s, effectively participating in NATO military exercises and sending their soldiers to NATO missions, for instance to the Balkans, Iraq and Afghanistan. Non-membership in NATO was seen in these countries more as a bureaucratic detail than a question of values.

END_OF_DOCUMENT_TOKEN_TO_BE_REPLACED 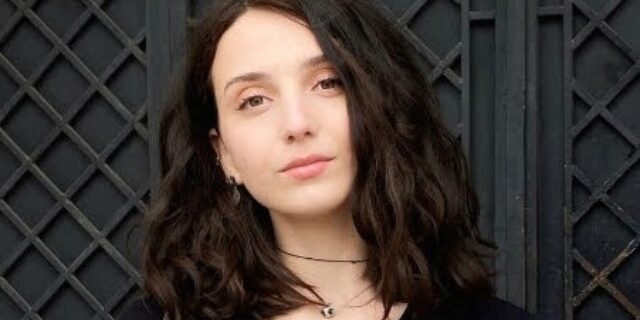 4 June 2022. Andreea Tănasie studies European Policy at the University of Amsterdam and is passionate about building a better future for the EU.

“The war in Ukraine was a call for action, a way of distinguishing between the values worth fighting for and the ones that made Europe descend into chaos”, she says. “But condemning the war is not enough. Reforms have to be made – in journalism, politics, culture, and our overall way of thinking about peace and conflict. My main wish is to be part of these reforms, engage in discussions about the war in Ukraine, and make sure that these months’ memory will become a guiding light for a more united Europe.”
Andreea participated in the M100YEJ in 2021.