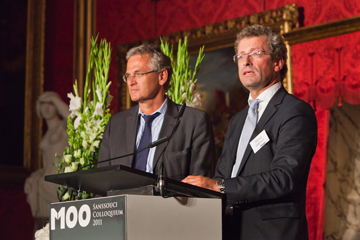 Revolutions are often associated with new means of communication. Newspapers and pamphlets were the companions of the bourgeois revolutions. “Peace to the cottages, war on the palaces,” demanded the poet Georg Büchner in a pamphlet called The Hessian Courier at the beginning of the 19th century.
And Karl Marx focused on the communications methods of his time in his Communist Manifesto: “Every class struggle is a political struggle,“ he wrote with Engels. “And that union to attain which the burghers of the Middle Ages, with their miserable highways, required centuries, the modern proletarians, thanks to railways, achieve in a few years.“
Exiled in Paris, Ayatollah Khomeini set the course of the Iranian Revolution of 1979 using audiocassettes, a brand-new technology at the time. Persian business travellers smuggled the recordings of his lectures into Iran, where they were copied in large numbers and distributed through the country’s bazaars. And it is unlikely that the freedom movement in Eastern Europe, from the strikes at the Lenin Shipyard in Gdansk, to the fall of the Berlin Wall, would have grown so quickly without the power of cross-border television images.

And now we are seeing how the Internet is making life difficult for regimes, autocrats and despots seeking to rigidly enforce their power around the world from Egypt to Zimbabwe.

More than 500 million Chinese use the Internet, more than in any other country, and 200 million people there have their own microblog. A whole generation of young Chinese is growing up with the Internet; the freedom of the World Wide Web is just as natural to them as it is to their contemporaries in the USA and Europe.
Yet, despite some reforms and the opening up of the country in recent years, China remains an authoritarian, one-party state. The Communist Party still has a tight grip on the media. Newspapers, magazines, books and films are censored and the Internet is no different. The independent Net, as we know it, does not exist in China. Our correspondents there often have to battle with difficult working conditions.

In China, the Internet is a unique creator of jobs: Ten thousand full-time censors scrutinise each website for contributions critical of the authorities. Hundreds of thousands of sites are blocked in China. The Chinese can only access sites such as YouTube, Facebook and Twitter by using technical tricks.

In China, Internet users are monitored as if they are handling hazardous goods. If you wish to use an Internet café in Beijing or Shanghai you must sign in with your ID card. You are under constant surveillance from video cameras and the computer keeps a detailed record of each site visited. Time and again, bloggers critical of the regime disappear. Some of them are just 20 years old and spend many years in prison for daring to express the truth on the Internet.

Partly due to resignation, partly due to fear of repression by the dictatorship, most bloggers restrict themselves to trivial topics such as cosmetics, shopping and diet. However, despite this harsh environment, the censorship and self-censorship, bloggers in China have assumed a socio-political role similar to that of the press in democratic countries.

They fight a constant battle with the censors. Bloggers and concerned Chinese citizens use the Internet to report environmental scandals, corruption and the squandering of taxes. Sometimes the pages are live for just a few minutes before the censors remove them. But in these few minutes hundreds of sites have already copied the information and distributed it further. So the pressure on the authorities, on politicians, the party has begun – and with millions of Internet users it will continue to grow.

In a country where the media is seen as a propaganda tool for the government, people such as Michael Anti are the only critical voices audible.
By the way, Michael Anti is not his real name. When he was born in 1975, his parents named him Zhao Jing. In Chinese, this means calm and peaceful. That was certainly well-intentioned … (but his parents probably could not have chosen a more unsuitable name for their son).
He chose the pseudonym Michael Anti himself. And that’s what we also want to call him. Because Michael Anti stands for criticism, for difficult questions, for opposition – that’s why we wish to honour him today. We are not always of one mind. But we have great respect for the journalist and blogger Michael Anti, who is not one to mince his words, intervening with great courage and sharp reasoning in debates and ignoring all political taboos.
Anti was always a pioneer; he began blogging when most of his fellow countrymen had absolutely no idea what a weblog even was. And he has always viewed himself as a journalist, never a dissident.
“I report on events, I don’t want to create them myself,” Anti has said in the past. This is the iron rule of journalism and his readers acknowledge that. Tens of thousands of Chinese follow his contributions; his blog has almost two million visitors worldwide.
Despite censorship and the persecution of bloggers critical of the regime, the Internet in China has now become a true fourth estate – due in good part to the endeavours of Michael Anti.

Born in the eastern Chinese city of Nanjing, Anti is only 36 years old, but he has already experienced so much in life that is necessary to shape an interesting mind. Mao Tse-tung died one year after he was born and China began very gradually to open up. Anti was 14 years old when in 1989 students demonstrated in Tiananmen Square in Beijing. He was an active member of the Communist Youth League then and criticised the demonstrators in his private diary. “To me they were traitors to our fatherland, and it was the army which saved us from nationwide unrest,” he later wrote about that period. And at that time, many Chinese probably thought as he did.

His first job was in 1995 on the reception desk of a hotel. At the end of the 1990s, he worked as a programmer in the Chinese provincial city of Wuxi. At that time, there were only two small bookshops in the city – nowhere near enough for a young man with a huge thirst for information. But then the first Internet café opened.

After long nights spent in front of the computer, Anti realised that he had completely misjudged the student protests. He began to write critical texts himself. He made a name for himself on the Net and a Beijing newspaper soon discovered his talent. Anti became a reporter in the capital; he was a war correspondent in Iraq and finally a researcher in the Beijing bureau of the New York Times. Michael Anti is now a columnist, journalist, university professor. But he still prefers to characterise himself as a blogger.

Anti’s story also demonstrates a shockingly dark side to the rise of China: At the end of 2005, the Microsoft Group deleted his blog – either due to anticipatory obedience or as a result of pressure from the Chinese authorities. Last March, Facebook also deleted Michael Anti’s profile. Many Western companies are vying for market access in China and are therefore often complicit with the system that dazzles us with growth, builds worlds of glitz that encourage increased consumption but which also often fears freedom of the individual. And we go along with it. Western technology groups such as Siemens and Cisco are selling their monitoring systems to the Chinese government. In 2004, Yahoo even handed over account data for the journalist Shi Tao to the Chinese authorities. As a result of this, Shi was arrested and sentenced to ten years in prison for treason.

China’s economic power continues to grow, year after year. But the scope for freedom of expression is diminishing. Yet something has shifted. It almost reminds of the time, which we can experience here in the Raphael Hall of the Orangery at Sanssouci. People emerge from these powerful pictures of saints as they were painted centuries ago. They become people with emotions – sadness, joy, and surprise – and individuals with a very personal profile. To me, the situation is very similar in present-day China. As a young student in 1981, I spent some time in Shanghai, which was at that time still a grey, drab city, its people a virtually undistinguishable mass of Mao suits. A few adverts for Japanese TVs or farmers already selling tomatoes and onions were virtually the only noticeable indicators of the enormous change China has undergone in the three decades since then. And to me, Michael Anti stands out as one of these Renaissance figures, who suddenly became individuals with their own profile. We can certainly say, Lord Weidenfeld, that without e-mails he would not have succeeded at all. But each generation has its own weapons. To you, Michael Anti, we wish to say: In your endeavours to change your country you are the herald of a new, open China. Welcome!
As we honour him here today, we recognise the importance of Michael Anti’s work.