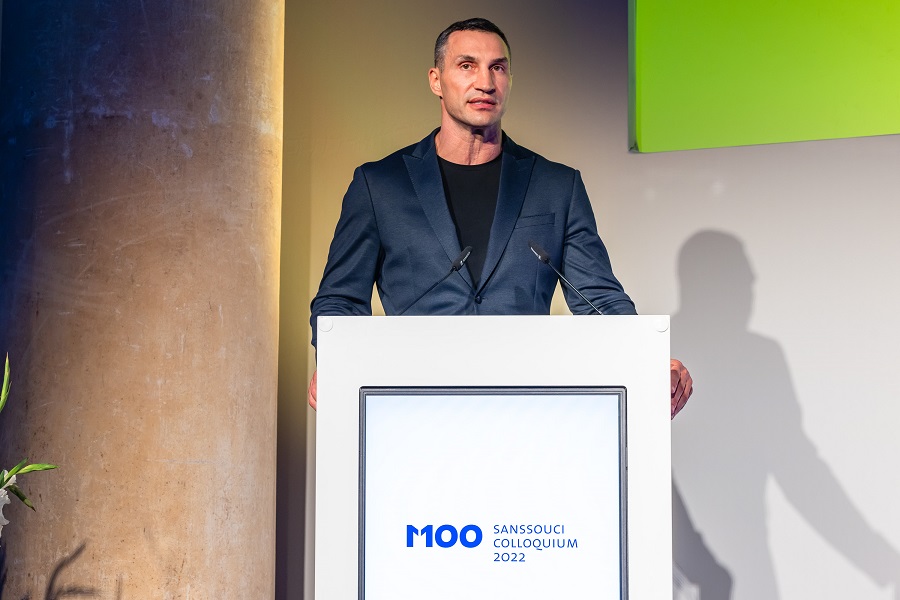 We literally do it.

September is the month when mostly the schools are open – lots of children in Ukraine, millions, left Ukraine and starting outside. For instance, my daughter’s school moved from Kyiv to Warsaw, and it’s great that some children will not see the horror of the war, will not hear the sirens, bombing, explosions, shooting, screaming, whining, crying, seeing dead bodies of their relatives, sisters, brothers, parents.

I cannot forget to mention, aside from the lucky ones, speaking of children, that having a chance to continue having this academic year that started in this month. But don’t forget that over 2,000 children in Ukraine been murdered, raped and killed and injured. They are not that lucky. I want to say, you as ambassador of the U.S., as an extension of your government, I just want to say thank you so much for all the support that we’ve been receiving from the U.S., especially with the weaponry. It is so important on the front line, not just the promises, not just the talks, not just sanctions, which are very important, but unfortunately in the war, you can stop the aggressor that goes against you with the weapons only with other weapons that are modern.
So please, pass in the chain, and much appreciation from the Ukrainian people, men and women and children include, for all this support.

Meine lieben Damen und Herren,
I cannot speak Polish, but I know you do understand English and German as well. And I just want to also say thank you to the Polish people.
The war, an invasion of Ukraine, started 2014. And from the first day of 14, Polish people were the ones that stand by our side. I remember this vividly during the Maidan movement.
Dziękuję bardzo! Dziękuję, dziękuję, dziękuję, bardzo, bardzo!

You just explained the history of Poland and the invasion of Poland in the Second World War and before the war. And you do know what it feels like, ou do know if we fail, you going to be next. You do know how it feels to lose your relatives and even destruction the country. You do know that from the history. And you have this feeling and they just want to say thank you from all the Ukrainians, men and women and children for all that you do for us.
Please pass it as well.

This is a distinction and a recognition, and usually, when you receive recognition, then you give an acceptance speech. It was also difficult for me to plan being here. And, of course, there was the option of maybe accepting the award digitally in the name of the Ukrainian people, for us Ukrainians. Understandably, this is not the time, while war is raging, while we sit here and our infrastructure and our lives continue to be destroyed. It is probably also not the right time to be making an acceptance speech.

But I am here on a very clear mission: not only to make an acceptance speech, but also to tell you that this war is still raging, and has been raging in Ukraine for six months. And it is understandable that people are getting tired of hearing about this war, how much we are suffering, and everything that we need, and that we keep saying: please support us, please help us. We are asking because it is a matter of life and death. It is a matter of existence. If you want to eradicate a people – and that is exactly what Putin’s Russia wants, to eradicate a people – you have to eradicate history. History has taught us this.

And that is precisely what Russia is doing: destroying schools, universities, museums. But language will not be wiped out. I stand for Russian-speaking Ukrainians. But that does not mean we should stop using Ukrainian and stop speaking Ukrainian – because that is what identifies our culture.
Ukraine has been suffering from this war since 2014, and eight years ago my brother Vitali stood in this very spot, and was awarded for this struggle for freedom. Even then, he and many others issued a warning to the free world: Russia not only annexed Crimea and started this war in Eastern Ukraine. Russia will continue if there are no consequences. Consequences, serious consequences, very serious consequences!
And that term in English is pretty good. It comes from boxing: “Bully the bully!”. That’s the way you stop the aggressor.
You can only stop an attacker by playing to your strengths.

And back then, as I just mentioned, when my brother said that if they are allowed to continue unchecked, then they might even attack Kyiv.
Back then, the answer was: Putin will never do that. Today, we know the truth.

Back then, just like many of my fellow Ukrainians, I was in my hometown of Kyiv. And just like many others, I signed up for the territorial army, which is part of the military, in order to defend my city with weapons in my hands. Just like every Ukrainian has done. And continues to do. And we will continue to do so, because we love our country, we love the freedom we have enjoyed since 2014 and the freedom movement – the struggle for freedom that was fought on the Maidan.
We will not live on our knees because we are Ukrainians. And we know that our principles really mean something – not only for us, but for future generations, for our children. Freedom and democracy.

In 2014 and on 24 February this year, President Putin declared war. His soldiers have murdered tens of thousands, and it is still happening. Before I continue, I would like to request a minute’s silence for the victims of this war.

Time and again, the media and the German politicians say the same thing: This is Putin’s war. No, this is not Putin’s war, this is Russia’s war. As many as 80% of Russians support this war. Unbelievable.

M100 represents the media, as a media award. And we know that the media is one of the strongest weapons in this modern world. Such as the propaganda that has been brainwashing the Russian people for decades. And is it horrible to think that state-sponsored media, Russian media, can still be seen in Europe. When I visited the World Economic Forum in Davos at the start of May, and turned on the television in my hotel room, I saw the reports from Mariupol – and Russian television explained precisely that Ukrainians had killed the Ukrainians and had caused all of the destruction, that they were the Nazis …
How is that possible? Are we that blind? Can we not put a stop to this?

This is also a huge problem: how is it that Russians, who continue to fuel and support this war in Ukraine can still visit the German mountains as tourists while their soldiers are destroying our cities? How is it that people from Putin’s circle and his friends are able to pop champagne corks in Saint-Tropez on the Côte d’Azur while their soldiers are committing genocide in Bucha, in Mariupol and other cities?

It really is difficult for me to explain Germany’s political stance back in my country. On the one hand, we have obviously received a great deal of help and support, a great deal, for years. On the other hand, consequences have been promised. We can remember: before the war, Russia was threatened with serious consequences if it overstepped the line and attacked Ukraine.

Many people, especially Russians, thought that they would conquer us in three days. They did not conquer us. They will never conquer us – because our spirit is stronger than any weapon.
Mr Chancellor, I am probably not the only one, but I have to say that I was immensely impressed by your speech. I do not want to accept these as mere words – especially the commitment that you gave us in Ukraine – but to see them reinforced with actions, with actions that we not only receive in small, but in large quantities.

Naturally, the German armed forces need Leopards, Marders and other modern tanks and weapons, of course. But I also want to remind you that the frontline is not here, the frontline is in Ukraine. And we are not that far away from you. If we were to believe the Russian propaganda – and we may well believe it – Ukraine is only the beginning.

You have probably heard these promises. And they will roll on. They will roll on until they are stopped. Let’s stop them together! There is always a history, a key person, a certain time, and these key persons can represent a turning point in a situation, in a crisis, in a war. And you, Mr Chancellor, you are this person.

There is enormous pressure on you, and all the decisions you have to make inside and outside the country. But you are the person who will go down in history. I want Germany and you personally to be on the right side of history. You already will be. But please, make sure. You can do it. We need more. The longer this war continues, the more we lose: more of our people, more of our future, more of our talent, more lives, infrastructure, finances etc. The list goes on for ever.
In this spot years ago, my brother Vitali announced that this Russian aggression may not be limited to the Crimean Peninsula or the east of Ukraine, but that it will continue onwards. The free world, including Germany, chose not to listen. There have been serious consequences. Nord Stream was further expanded in the preceding years, and this pro-Russian policy has continued to dominate in Germany.

This time, I do not want you to turn a blind eye. Things are as serious as they could possibly be. And I can understand from what I see in the media and in pictures that it is extremely difficult to comprehend what it must be like to live in this horror that we in Ukraine are living. But I must ask you that we, the free world – I do not see myself as different to you, I say ‘we’ because we are part of the same ecosystem, economically and geopolitically, and also with our democratic principles – we stand as one front against this war that Russia and President Putin have started, so that we can stop it quickly, as quickly as possible.

I have a dream that it will all be over soon and that there will finally be an end to this endless suffering. In the end, we will no longer be talking about victims of war, but about the era of peace, the era of reconstruction. Ukraine is beautiful. Some of you, perhaps many of you, were there for the European Football Championships in 2012, which we hosted together with Poland. There were also some matches played in Donetsk. You can remember the success of Ukraine in the European Song Contest and, just as brilliant, you can remember how great the Champions League Final in Kyiv was. Let us repeat this success together! Let us enjoy these happy moments in Ukraine again together!
I am certain: If you were already in the Ukraine before the war, then you will return. This time to help rebuild the country. You will feel so much warmth. We have people who are amazingly talented. And we are yearning for life – a modern life. Let’s build this together.

That must have consequences to never happen again.

Thank you very much! Slawa Ukrajini!