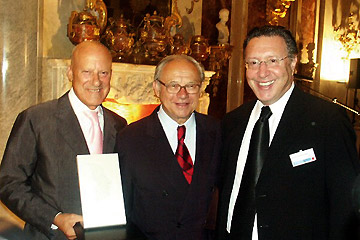 Lord Forster, architect and urban designer, was the first recipient of the M100 Sanssouci Prize of the European Press. In 2005 the prize was presented to him at an award ceremony in the Neue Kammern. “Norman Foster is an architect and designer of superlatives” as Professor Dr. Wilhelm Vossenkuhl put it in his honorific speech. He added that to Norman Foster architecture is capable of making politics and democracy more transparent. This is demonstrated for example by the German Reichstag in Berlin. Jann Jakobs, Lord Mayor of Potsdam, said with Foster’s activities in mind which extend from Berlin and Barcelona to Hong Kong, New York and Sao Paolo that a great European has left his “footprint” not only in Europe.

Norman Foster was born in 1935. After graduating from Manchester University School of Architecture and City Planning in 1961, he won a Henry Fellowship to Yale University, where he was a fellow of Jonathan Edwards College and gained a Master’s Degree in Architecture.

Established as Foster Associates in 1967 his practice, now known as Foster and Partners, has project offices worldwide with its main studio in London. The practice has worked in 48 countries and currently has projects across 22 countries. Since its inception it has received over 360 awards and citations for excellence and has won more than 65 national and international competitions.

Recent and current projects include the new international airport for Beijing, the German Parliament at the Reichstag, Berlin, the Headquarters for Swiss Re, the Great Court of the British Museum, the Millennium Bridge and the pedestrianisation of Trafalgar Square in London; Centers for Sciences Research, Stanford University, USA; the new Supreme Court in Singapore; an entire University Campus for Petronas in Malaysia; Hearst Headquarters tower, New York, the Museum of Fine Arts, Boston and an Opera House in Dallas.

Amongst Foster and Partners’ major buildings are the Hong Kong International Airport, Chek Lap Kok and the Hongkong and Shanghai Bank in Hong Kong; Commerzbank Headquarters in Frankfurt; Stansted, London’s Third International Airport; Century Tower in Tokyo; the Torre de Collserola, a communications tower in Barcelona; the Carré d’Art, an art gallery and cultural centre in Nîmes; the Sackler Galleries at the Royal Academy in London; Willis Faber & Dumas Head Office in Ipswich (which has been awarded ‘listed building’ status alongside nearby Ely Cathedral) and the Sainsbury Centre for Visual Arts in Norwich.

Norman Foster has lectured throughout the world and has taught architecture in the United Kingdom and the United States of America. He has been Vice-President of the Architectural Association in London, Council Member of the Royal College of Art, a Member of the Board of Education and Visiting Examiner for the Royal Institute of British Architects and was a founder trustee of the Architecture Foundation of London. The work of the practice has been exhibited worldwide, including Barcelona, Berlin, Bilbao, Bordeaux, Cologne, Hong Kong, London, Lyon, Madrid, Milan, Munich, New York, Paris, Sao Paolo, Singapore, Tokyo, Valencia, Venice, and Zurich. The practice is represented in the permanent collections of the Museum of Modern Art in New York, the Centre Georges Pompidou in Paris and the Victoria and Albert Museum in London.