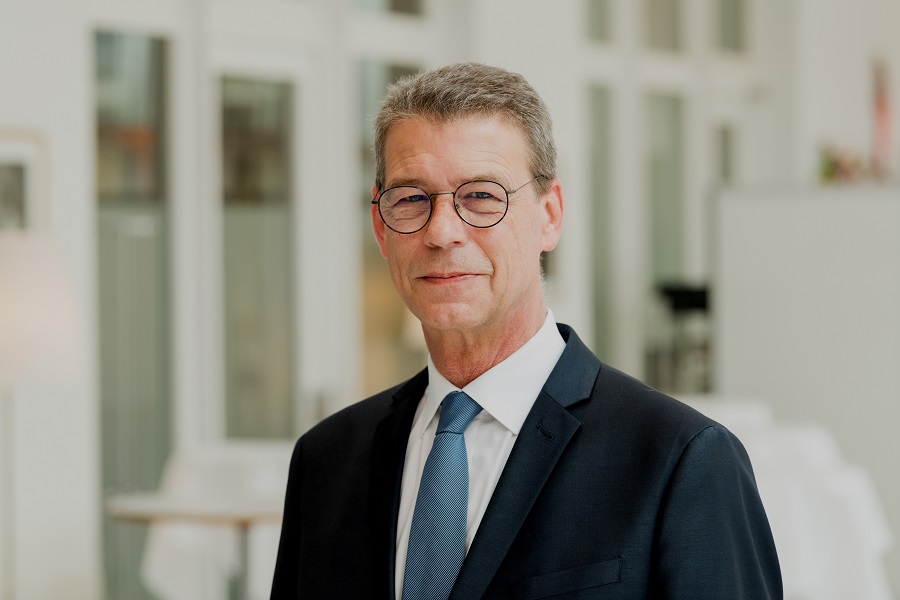 23 February 2022. Interview with Christoph Lanz, member of the M100 Advisory Board and Head of Board Thomson Media, on the Russian conflict and the role of Germany. The interview was conducted by Vazha Tavberidze, regular participant of the M100 Sanssouci Colloquim, for the Georgian Service of Radio Free Europe and has been slightly shortened. It appeared in the original on 15 February on the occasion of Chancellor Scholz’s visit to Moscow.

Vazha Tavberidze: Would Germany and Scholz be willing to toe the Washington line when it comes to Nord Stream 2?

Christoph Lanz: If something happens around Ukraine regarding the sanctions, I’m 100% confident that we will not start to operate Nord Stream 2, that’s for sure. If the German government decides differently, if Putin starts a new aggression against Ukraine and we don’t touch Nord Stream 2, this means he managed to successfully divide Europe. Nord Stream 2 isn’t just a pipeline anymore, it’s now a symbol too.

VT: Germany has been criticized for its somewhat ambiguous stance on Ukraine – what is it with the German thinking that differs with the rest of the West?

CL: We have our share of “Putinverstehers,” such as the crazy former chancellor Schroder, whose behavior is disgusting. But even if we have these Putinverstehers, most in Germany are in favor of Ukraine and its sovereignty. Also, we don’t want a war within Europe. That might be, by the way, our problem in that conflict. Timothy Snyder, an American historian, says that Russia will always try to gain back their “blood lands”, their sphere of influence – Ukraine is one of these countries, and so is Georgia. When he was in Berlin, he said that we have to become aware of the real intentions of the Russians. And then he said, “You know what the question is? It’s are you ready to fight for those or not?” We are not, and this is the problem.

VT: Is fighting a war equal to delivering defensive weaponry to Ukraine? Because that’s one stance that Germany has seen a lot criticism for. Especially considering that Berlin’s official line of explanation centers on not delivering weapons to tension zones – yet Berlin has seen record weapons sale revenue in the last year, and has been supplying weapons to countries like Egypt. Why the double standards?

CL: I would say that while the Ukrainian President was a former comedian, he’s now the president and a politician, whereas the German government and politicians behave like comedians now by sending helmets to Ukraine. It’s ridiculous. I personally think we should not start to send millions of weapons, but I think it would be a good sign of solidarity to send a limited amount, whatever kind of defense-oriented weapons they may be. And I’m not the only one who says that in Germany. Around one fifth of the population thinks the same.

VT: The only diplomatic solution that Russia seems to favor – and which Berlin and Paris would probably be content with – makes Kyiv very unhappy. The Minsk Agreements and its Steinmeier formula attachment makes Ukraine worry it will lead to federalization and a de-facto veto on the country’s Western course. Are Kyiv’s fears justified?

CL: It’s not that I want to push any conspiracy theories, but you have to remember that Steinmeier was a very close ally of Gerhard Schroder. He served as Chief of Staff of the Chancellery for six years during Schroder’s tenure. And he belongs to the “old boys” network of the Social Democrats. I don’t think he followed our ethics and our principles when he made such a proposal. So I would say Kyiv’s fears are justified. I can really understand that people in Ukraine are irritated by Germany today, I met with a Ukrainian friend of mine, and when it came time to say goodbye to her, I said I felt very embarrassed by the German government’s behavior. I apologized, and said I wished her country all the best. And it wasn’t easy for me. But that’s all you can say.

VT: And finally – your thoughts on this RT vs Deutsche Welle standoff that the Kremlin seems to be all too trigger-happy about?

CL: The conflict around Deutsche Welle and Russia Today is another stone in the mosaic of the tensions between Germany and Russia. That’s really a tough, asymmetrical reaction – rolling out big cannons after a little incident. I see it as a pure provocation, but what should be our answer? Should we kick out the Russian journalists because of that? I don’t think that would be clever. Our policy is that, unlike Russia, we really have press independence. And we really respect the freedom of opinion, maybe sometimes even too much. We should demand the return of Deutsche Welle, because they had a running license – unlike Russia Today – and the Russian state just took it away. But in one and a half, two years from now, Deutsche Welle will open up an office in Moscow again.