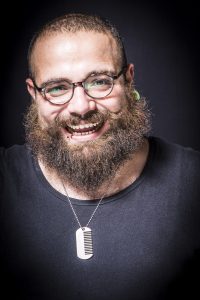 Firas Alshater, born 1991 in Damascus, studied acting. In the revolution against Bashar al-Assad, he began working as a journalist and cameraman for foreign news agencies. He was arrested several times and brutally tortured. He has lived in Berlin since 2013. Together with Jan Heilig he shot the documentary “Syria Inside” as well as various YouTube videos for the web series Zukar. Firas Alshater is currently studying at the Film Academy in Babelsberg. He believes steadfastly that integration can work. Firas Alshater is a normal Berliner with hipster beard and glasses, a comedian and successful YouTuber. Only that until two years ago he was arrested and tortured in Syria for his political videos by both the Assad regime and Islamists. Only the work on a film brought him the desired visa for Germany, and Firas entered the largest cocoon in the world: the West. Since then he has tried to understand us: the deposit system, private mailboxes, ticket machines and the German language (“One life is not enough for”). But when his brother comes to Europe via the Mediterranean with his family, Firas realizes: “I am already totally German. So there’s something else that can be done with us and this new country. Firas tells of his experiences in Germany and Syria in a funny, tragicomic, open-minded and always endearingly cheeky way.