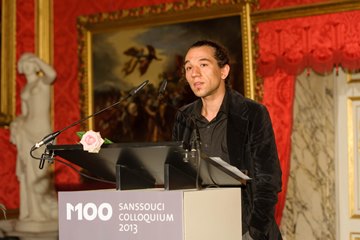 My name is Erdem Gündüz … I am a freelance choreographer and dancer.

I am very proud to receive a prize on a place like Potsdam – a city which is famous for tolerance, cosmopolitanism and defense of freedom. A city which was on the other side of the iron curtain for many years and which is now in the center of Germany, right between the East and West, the Orient and Occident. Sometimes I feel being on a spot between the Orient and Occident, as well.

In 2010, I did one dance piece. The name was Witch Tree.
Let me start by quoting a part of Edip Cansever’s poem, the Witch Tree.

The parts of nature
I have forgotten,
or have never encountered,
they let themselves be, one by one,
I am passing from a path I have created on my own,
On the path, I see a dry Witch Tree.
I’m looking at the Witch tree in silence.
The extensions of it, something dry as me, this witch tree
What kind of thing am I?
I feel a painless ache. At that time…
The ache is spreading through my arms that are me.
The ache is spreading through my feet.

It seems as if I have very close relationship with some objects.
And I am the man who implies unresolved circumstances.
Whatever it is, from the most genuine side of a man,
from the most unexplainable place,
I am a man who flows
in order to be explained.
And I stand there,
On the path
That I created on my own.
And there I stand, and there I am,
since I stood there, I am still,
standing still.

The first concept is ambiguity and duality. There might be a work of art, you do not know how to define it in definite terms. A part of the audience may perceive a specific thing whereas another part of the audience perceives a totally different thing. Forming a definite relationship becomes impossible. Just as what people thought about the Standing Man.

The next concept is relationships. One theme may be related with another theme. Humans, humanity, collectivity, individual body and communal body are all related to one another. The body of the individual turns into the body of the community. We talk about concepts such as uniqueness and the transition of the unique self into the communal whole, or the collective unity. What becomes important is the collective consciousness, it is expressed not in collective terms but in individual terms. The unity formed by individual entities becomes more important and more powerful when compared to the unity formed by a collective power.

As for leaders, people have asked me why I faced the picture of Atatürk while standing. Well, I should admit that I miss his ideals and principles. Some people have claimed that “Ataturk was a Dictator, not simply a Leader”. I do not agree. Ataturk’s idea was to make Turkey gain European ideals and modern principles, and to follow the most advanced societies in the world. I know that there are many people who agree with me. Ataturk was not a dictator but a good leader. The AKP Government wash brains via TV, newspapers and the whole media. Before the AKP government came to power, Turkey was more European, enjoyed more freedom in media and social life in the Middle-Eastern world. The government has destroyed Turkish media and made the media representatives give news only with the government’s perspective.

However, democracy does not only mean protecting the rights of those in power. It is not only elections. In contrast, democracy should defend the rights of the minorities and the rest of society. It should preserve civil rights, women’s rights, freedom of speech and thought. Take women’s rights : The AKP practices put strong moral pressure on women, and dictate them how many children they should have. At least three, preferably five. Pregnant women are encouraged to stay at home, not to go out. There is exerted social pressure to dress themselves with headscarf if you are in Urban side, you will witness this. No truly democratic government in the West would try to exert pressure on voters to behave in life either way.

And again, people have asked why I was silent and motionless in front of a portrait of Ataturk on Istanbul’s Taksim Square.

At first, it was a protest against the Turkish media who did not do their job properly and objectively. During Gezi Park protests, a foreigner was not able to learn what is happening in Turkey via Turkish media. Then, my act was a reaction against police brutality in Turkey during the Gezi Park protests. Finally, I wanted to show my respect to Mustafa Kemal Atatürk because he established our country. As I said before, I miss his principles and ideas to create a new and modern nation after our war of independence. That’s why I stood in front of his portrait and stared at it for a long time.

While I was standing there, I remembered his words, saying: “Peace at home, peace in the world”. This was his main principle. He envisioned a society without class or other differences between citizens of Turkey, which he first created as a nation. He claimed that religion and state should be separated. He created a new political and legal system, abolished the Caliphate and made both government and education secular, gave equal rights to women, changed the alphabet and the attire, and advanced the arts and the sciences, agriculture and industry. That was – in comparison to the Ottoman state – a social revolution.

Ok, so, what is the relationship between those themes and the performance itself?

First of all, my purpose of doing this was not doing a performance or fine arts. I did this as a citizen living in that country. This was not intended to be a performance. What is interesting here is, if the person who began this performance was an ordinary man on the street, maybe people would not perceive it as a performance.  It is also the same for the understanding of fine arts.

Finally, we are human beings. We form empathy. We may show empathy to others, or we may not. In fine arts, it is the same. You may form empathy with a piece of art, and sometimes you may not. Maybe there is no more a thing as dance. Maybe dance should be reconstructed. So that it keeps on living with a new meaning, not new movements. For example, in my performance called the Witch Tree, there is almost no dance at all. There is only the story of a muscle getting tense, combined with sculpture and poetry. People may love it, or not. These are all a part of life itself.

In addition, In 2007, I did one dance piece. The name was “Duvar”, which means “the  wall”. I ran against the wall with my body. Because I tried to tear-down the wall, like running through the wall, jumping, crashing, falling down, rolling back, regaining energy and trying again and again for 6 minutes. My body manipulated me, too. This piece was related to my artistic perspective about being against the border which separated people.

Another performance I did was in 2004, related to Turkish headscarf ban at universities. This performance was for equality. My friends and I did that performance in order to ask for equality for all of us. Because at universities Islamic boys could easily go to University with their Islamic wear. But girls could not. Turban was for women, not for men. We made reference to this situation. We were of students art. With two fellow students, besides me, a man and a woman, we went inside the classroom to attend the art class wearing headscarves. That was forbidden. We just attended the lecture and wore a headscarf. I do nıt claim to be an activist, a man of politics. But with a lucky incident I had the chance to work on political bodies and the politics of the body itself.

I am not just standing, I am also asking, questioning, dancing, quoting…

This year I performed one piece on Istiklal Street. Which was a public area. And I read my manifesto on high stand in the piece. “One, love is everywhere. Two, at the end, every body will die. Three’ my the last piece was bad.” I told very important things for me. I am also questioning ideas, things, conventional ideas, general and fundamental conceptions. And then “Four, how can one be sure if it is a piece of art work or not? Five, what is the relation between me and the object of arts? Six, is there any art council in turkey?” The name of the piece is this: “Is there any arts council in Turkey?” Because if you are working alone, it means writers, painters, sculptors, choreographers who are self employed, can not apply Turkish Ministry of Culture.

I am not asking just why it is like that. I am also asking what is choreography? What is dance? Which is dance? What is a work of art? How do we understand the world? Please let them be …

Before finishing my words, I would like to quote some advice for young artists by Auguste Rodin. He once said: “The main thing is to be moved, to love, to hope, to tremble, to live, be a human before being an artist!”