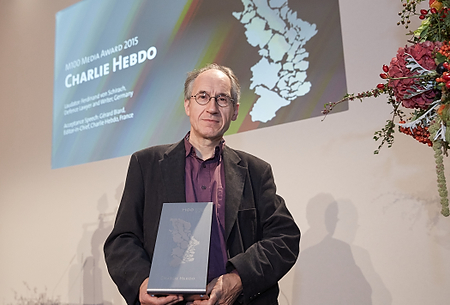 The M100 Media Award 2015 was presented to the French satirical magazine Charlie Hebdo. The board of the M100 Sanssouci Colloquium based its decision with the epochal significance of Charlie Hebdo’s ordeal. The free world must show solidarity with the victims in every way. Freedom of speech and freedom of press is fundamental to every democracy. It must be defended under all circumstances.
Editor-in-chief Gérard Biard accepted the award in the presence of Foreign Minister Frank-Walter Steinmeier, Potsdam’s Lord Mayor Jann Jakobs, French Ambassador Philippe Etienne, and around 200 invited guests. “The beliefs and values we advocate are universal values, and as such, belong to all citizens of the world,” Biard said in his acceptance speech. For this reason, all citizens of the world should stand up for them, he added. “Despite what has been claimed, we have never criticized Islam or Muslims. We criticize Islamism as a political ideology.” The first victims of “totalitarian Islamism and its henchmen” everywhere around the world are always primarily Muslims, Biard said.
“This award today honours the dead – and it honours the survivors,” said writer and defence attorney Ferdinand von Schirach in his speech honouring the magazine. The fact that “Charlie Hebdo” continues to exist is itself a victory, he added, noting that if satire outrages nobody, it is meaningless.

On January 7 2015, 12 people were killed in a terrorist attack carried out by two perpetrators with Islamist motives on the editorial office of Charlie Hebdo in Paris; the victims include 8 Charlie Hebdo employees and the publisher Stéphane Charbonnier. In 2011, the offices were also subject to an arson attack, following the publication of special edition on the electoral success of Islamists in Tunisia.

Yet, of the 520 Charlie Hebdo covers that have appeared over the past ten years, fewer than 20 have dealt with the topics Islam, Islamism or Mohammed. Charlie Hebdo – like every other satirical publication – targets all relevant social issues.

In 2006, however, the magazine was one of the few publications worldwide to re-print the Mohammed caricatures out of the Danish paper “Jyllands Posten”. The Danish cartoonist Kurt Westergard, who has since been under constant police protection, was the recipient of the M100 Media Award in 2010.

“The right to freedom of speech is one of the fundamental rights of a civilised humanity,” Lord Weidenfeld, co-chair of the M100 advisory board, explains the decision. “Criticism – or even caricature – of political, cultural or religious tendencies and leading figures should not be forbidden. The Charlie Hebdo ordeal is of epochal significance and the free world must show solidarity with the victims in every way. It is thus a particular honour to present the 2015 M100 Media Award to the chief editor Gérad Biard and Charlie Hebdo during this event in Potsdam”.

“We are not giving the award for a caricature – we are paying tribute to the value of freedom of speech and freedom of press”, explains Stephan-Andreas Casdorff, chief editor of Der Tagesspiegel and member of the advisory board. “It is fundamental to every democracy. It must be defended. Under all circumstances.”

Chief editor of the BILD and advisory board member Kai Diekmann emphasises: „The terror attack in Paris was nothing other than an attack on the heart of our civilisation. The terrorists didn’t just target our colleagues from Charlie Hebdo, whom we are still mourning today and wish to pay tribute to. No, their ruthless hatred is directed at the freedoms which define our societies: freedom of press, freedom of opinion, freedom of the arts. These freedoms set us apart from the darkest corners of the world. The only way we can respond to the abhorrent terrorists is to fearlessly continue to live the way we live. To write what we want to write. To draw, paint, write poems and speak about whatever we feel like. In a world of terror, we might have to pay with our lives. But if we aren’t prepared to pay that price, then we aren’t free. Our colleagues in Paris paid the highest price for their freedom. We bow to them in thanks with the M100 Media Award!”

The attack on “Charlie Hebdo” has also occasioned an international digital project by the Axel Springer Academy,“Je reste Charlie”, which is today being launched in three languages. At www.jerestecharlie.eu reporters  from the German school of journalism describe how, in the wake of an attack, people around the world continue to boldly stand up for what they believe in and fight against terror. Partly for the first time, surviving members of the “Charlie Hebdo” editorial team, relatives of those killed and others that have been affected reveal how they manage to get on with their lives after the assassination and how the terrorist attack has changed  them and French society.

The M100 Media Award annually honours a personality who has left his or her mark in the world. The award reflects their service to the safeguarding of freedom of expression and the deepening of democracy as well as their outstanding achievements in promoting European understanding and communication.