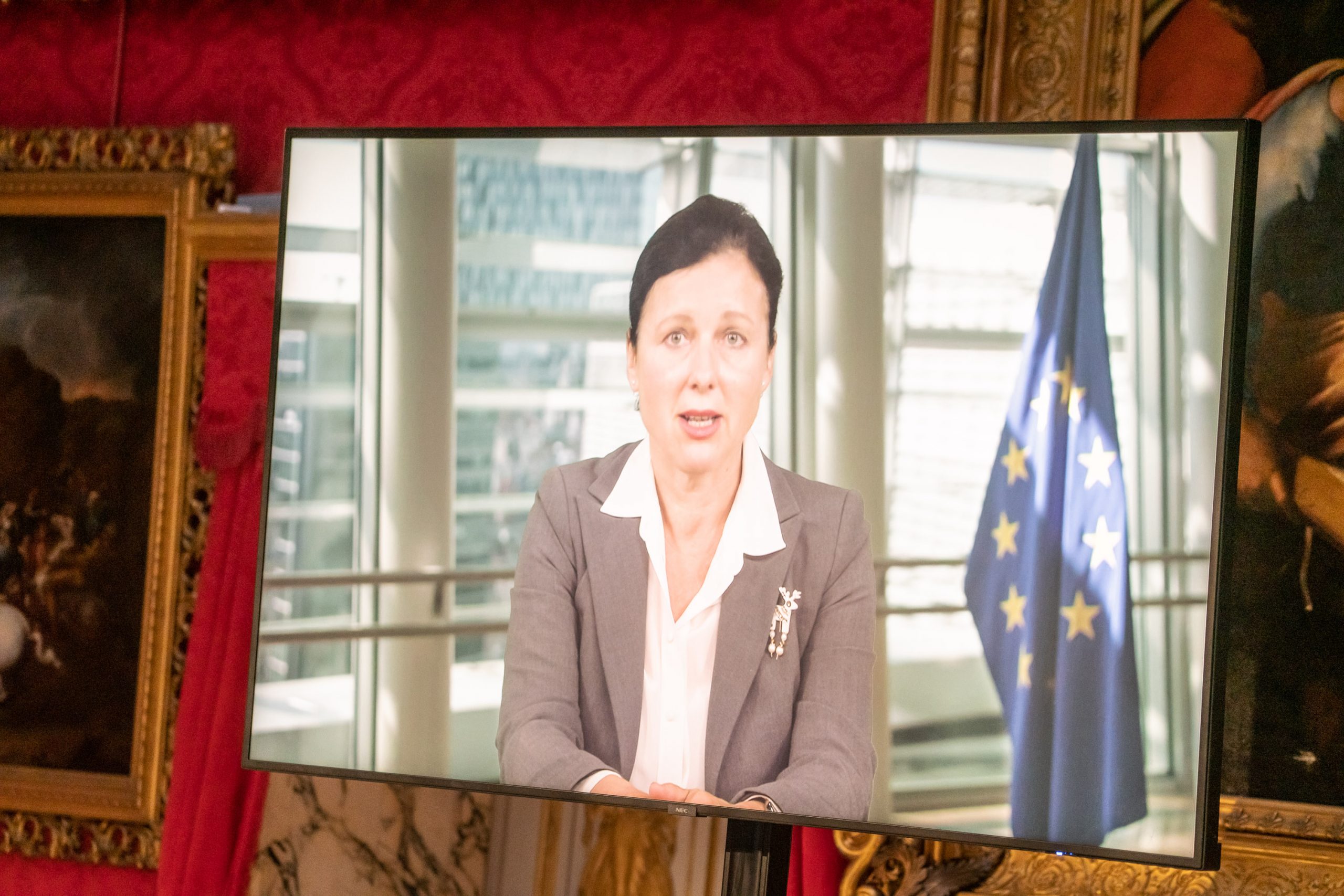 It is a pleasure and honour to be – virtually – with you.

The Colloquium focuses this year on the post-COVID media order.

There are already many lessons that can be learned from this crisis.

The COVID-19 pandemic has clearly demonstrated the essential role of journalists.

The crisis has amplified pre-existing trends. The economic situation of the media sector was already fragile before the crisis, with the digitalisation and increasing power of online platforms getting the bulk of advertising revenues.

But media are not only losing money, they are also losing people. Even here, in Europe, journalists are murdered. Journalists Daphne Caruana Galizia, Ján Kuciak – and also members of the team of French magazine Charlie Hebdo which received the M100 Media Award in 2015.

All these attacks make the media sector more vulnerable, vulnerable to those who want to interfere and impose their narrative. This means that our democracies are weakened as a result. Because media are not only an economic sector, they are the pillar of democracy.

Before 1989 I lived in a country, communist Czechoslovakia, where there was no freedom of speech, there was no pluralism of media or even of thought.

This should belong to the past; it should never be part of our future. Nowhere in Europe.

Yet, the trends we see in some countries make me really concerned. Too often I see politicians trying to reduce criticism to ‘fake news’, trying to influence ownership of the media and content of the stories.

We will shed some more light on these issues in the first edition of the new rule of law report, including on measures put in place for the safety of journalists – for each country in the EU.

Building on this analysis, we will present a series of initiatives by the end of the year to strengthen democracy, rule of law, fundamental rights and to help the media sector recover. Our historic recovery plan should also support the media sector while fully respecting its independence.

We will also look very closely at the application of new rules on audiovisual media services – which will be a reality across the European Union as of 20 September. They notably strengthen the independence of media regulators and encourage transparency of media ownership.

We are determined to continue co-funding a series of projects that support cross-border investigative journalists and provide legal aid to those who need it. This is what the European Centre for Press and Media Freedom in Leipzig is doing.

The job of journalists is to look at the hands of those in power and keep them in check.

George Orwell said that journalism is printing what someone else does not want published.

This is why I am pleased that tonight we applaud and pay tribute to Szabolcs Dull.

Mister Dull, you have been standing and fighting for journalism.

I also would like to pay tribute to many in your team who made the difficult decision to resign and are now starting a new project, Telex.

I give them my best wishes of success. And also my commitment that I am looking into all possible ways to improve the situation of media pluralism and freedom in the EU.

Because in the post-COVID media order that I would like to see, journalists everywhere on our continent will be able to their job freely and safely, in full independence and in fair economic conditions.

It is only way forward for democracy to thrive.