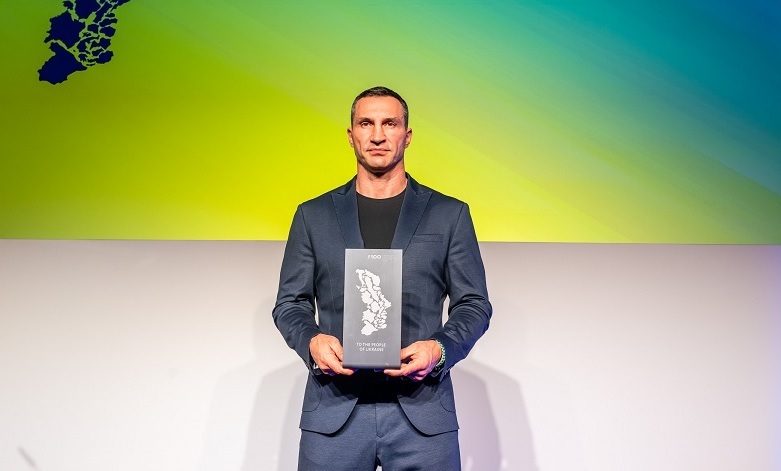 Excerpt from the acceptance speech by Wladimir Klitschko, who accepted the award on behalf of the people of Ukraine at the M100 Media Award ceremony on 15 September. After the welcoming speech by Potsdam’s Lord Mayor Mike Schubert, German Chancellor Olaf Scholz gave the keynote speech. The laudations were given by Donald Tusk, President of the Civic Platform, former President of the European Council, and Dr Amy Gutmann, Ambassador of the United States to Germany.

“But I am here on a very clear mission: not only to make an acceptance speech, but also to tell you that this war is still raging, and has been raging in Ukraine for six months. And it is understandable that people are getting tired of hearing about this war, how much we are suffering, and everything that we need, and that we keep saying: please support us, please help us. We are asking because it is a matter of life and death. It is a matter of existence. If you want to eradicate a people – and that is exactly what Putin’s Russia wants, to eradicate a people – you have to eradicate history. History has taught us this.
And that is precisely what Russia is doing: destroying schools, universities, museums. But language will not be wiped out. I stand for Russian-speaking Ukrainians. But that does not mean we should stop using Ukrainian and stop speaking Ukrainian – because that is what identifies our culture.
Ukraine has been suffering from this war since 2014, and eight years ago my brother Vitali stood in this very spot, and was awarded for this struggle for freedom. Even then, he and many others issued a warning to the free world: Russia not only annexed Crimea and started this war in Eastern Ukraine. Russia will continue if there are no consequences. Consequences, serious consequences, very serious consequences!”