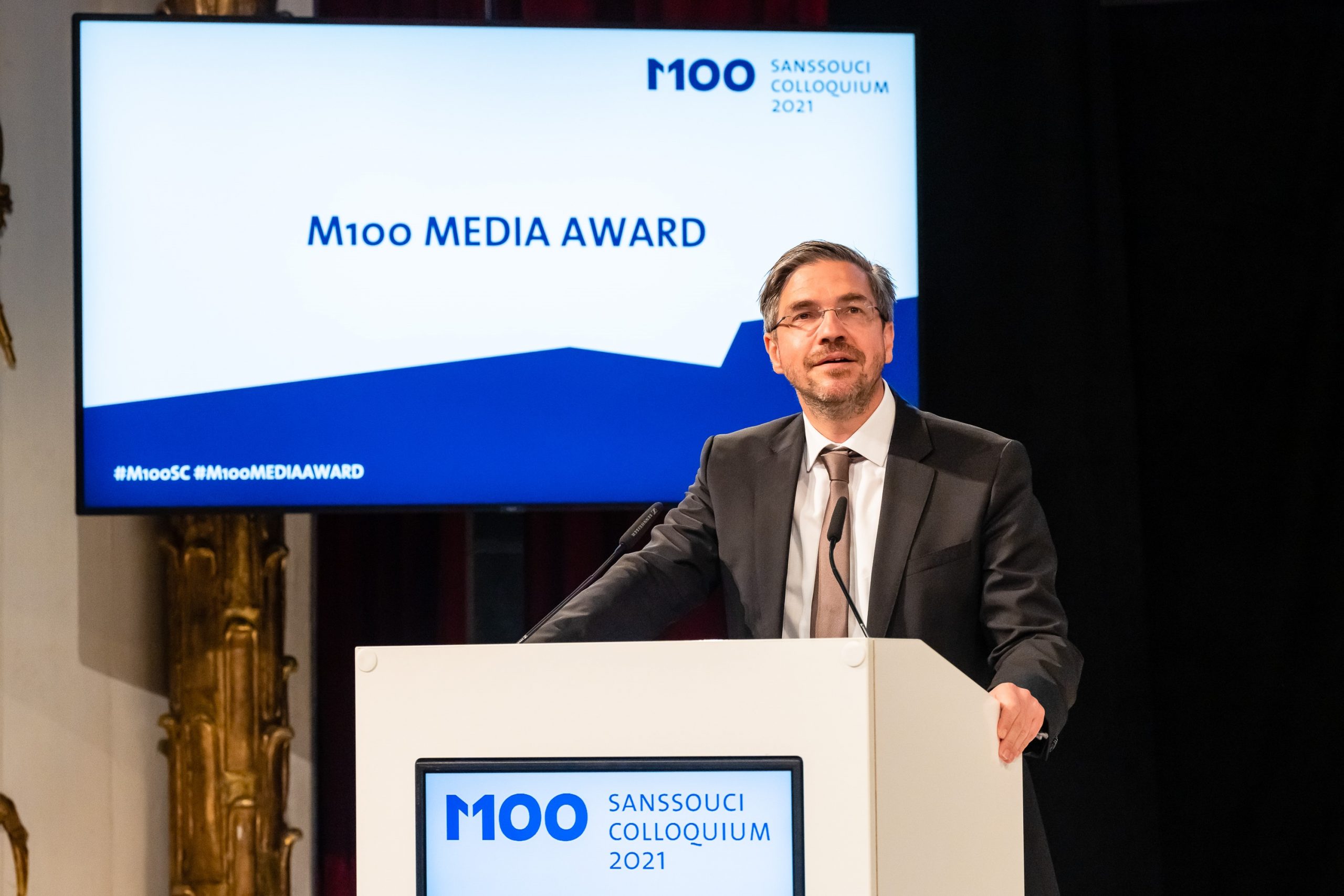 It’s great to see you all back here again after we were unfortunately only able to hold a small version of the M100 last year due to the pandemic. I would therefore now like to extend a particularly warm welcome to you in the state capital of Potsdam.

I am pleased that you, Mr Lindner, have come to us today, despite the special situation in Berlin, to give the laudation on Alexander Navalny. I freely admit that I am very curious about your speech on this year’s laureate – after all, it will be delivered by a man who in all likelihood will become a member of the new federal government in a few weeks’ time.

Thus, for me, your statement today is also an indication on how one of the future governing parties is going to position itself in the area of conflict between freedom of opinion and the associated individual freedom of a political dissident and the nevertheless necessary geopolitical need for communication and rapprochement with Russia.

This year, M100 has dedicated itself to the topic, “From Permanent Crisis to Democratic Resilience”. This issue is very much based on the events of the past year, but not exclusively. On a year of a pandemic, the likes of which have never been seen before in our modern world. But democratic resilience has not only been playing a role since the coronavirus pandemic. In an increasingly fragmented society, the issue of strengthening the value of community is once again more important than ever if we do not want to watch our society atomise into a horde of individualists.

For me, democratic resilience is the ability of a community to repeatedly accept democracy, supported by the majority of society and legitimized in the democratic debate as a form of society, state and life, in situations of social and political crisis and transformation, and to defend this fundamental value of a pluralistic society.

Yes. For me, defending these fundamental values also goes hand in hand. Because with all the plurality of opinions, tolerance has to reach its limit when it comes to defending against anti-human and anti-democratic statements. The prerequisite for a democratic polity is the protection of human and fundamental rights and the affirmation of democracy as a form of society. And I believe that all powers need to contribute to this.

Ladies and gentlemen, you have spoken at length today about your views on democratic resilience and the role of the European media in strengthening it.

If you are a German politician looking at the media and their impact or looking for examples, you might do well to look beyond the domestic publications first. You really could step on a few toes doing that. As a politician in a media society, who really needs that?

And that’s why I want to give you an initial example – as a warm-up, so to speak – using an article from an Austrian newspaper. Our board member Christian Reiner pondered the issue of whether we still “Know what we are voting for?” in his latest editorial in the Austrian magazine Profil. Well, dear Christian Reiner, I at least remember what and also why I voted for him. But I admit that my voting decision-making might indeed differ from that of many others.

Christian Reiner describes a threat to democratic resilience in his article. Where pluralism and substantive distinction of the parties as a criterion are lost, space is created for decisions based more on the human qualities of the candidates, or at least those that the respective campaigns want to suggest to us.

But the question that arises at a media congress is the role of the media. So, what does the media and the way in which it reports contribute to these people being elected?

Let me pose a thesis:

The attention economy of today’s media business is a perfect breeding ground for the emergence of populist sentiments and the personalisation of politics that is often associated with them. The pointed thesis presented by a politician-type agent provocateur is what makes headlines.

Politicians only become interesting for the media when they can be labelled as provocative lateral thinkers, taboo breakers, troublemakers. A good example is Boris Palmer during the coronavirus pandemic.

On the other side are the politicians, whose statements are more difficult to condense into sensational sentences. Media interest also starts to wane if a politician is no longer prepared to always break taboos during the course of political career. There is thus an ongoing relationship between provocation and headlines. The media and politicians thus become symbiotic partners.

Because there are media populists who think they are giving expression to the real concerns of ordinary people that would no longer be adequately addressed in an allegedly detached political establishment.

Does this form of reporting contribute to democratic resilience? This could definitely be argued about, but not on one issue in my opinion.

There has been one issue in the past six years for which political and media populism has been a poison, challenging democratic resilience and our common European canon of fundamental rights. No other issue has been the subject of such populist arguments in recent years, even by representatives of so-called established parties, as the refugee policy. For me personally, one of the low points was a statement by the Austrian Chancellor Sebastian Kurz in the Bild newspaper in January 2020.

Now, I personally don’t think much of letting people drown to deter others. Which really is the reverse of this statement: We should stop saving some for the time being, because if some are not saved, others will not follow.

This is wrong, cynical and inhumane.

Lest I be misunderstood here, it is just as wrong and unacceptable if the Chancellor is then called an eco-fascist or a baby-Hitler in the responses from the sea rescuers.

If you want humanity in Europe, it starts with language. Otherwise, the result will be precisely the populist front, which will certainly not enable citizens to form their opinions on the basis of facts.

But what would have been my very personal, you might think naïve, expectations of a newspaper? At the very least, simply point out to the Austrian Chancellor the international law of the sea and perhaps Article 18 of the Charter of Fundamental Rights of the European Union, which paraphrases the right to asylum, and confront him with his deviating position. Perhaps with the question of whether he already knew at the time of the rescue whether it was a person who had no right to asylum.

Incidentally, this can also be processed afterwards in the headline form of the boulevard paper. I want to try my hand at headlining.
“Scandal – Austrian Chancellor wants to let people drown in the Mediterranean!”
Or
“Austrian Chancellor calls for breach of European law!”

That would certainly have been an eye-catcher. But it would, I agree, have contributed just as little to the solution.

At the beginning of 2019, the German Cities of Safe Havens alliance was founded in Potsdam with 13 members who advocate for asylum procedures based on the rule of law and the distribution of people throughout Europe. Today we have over 100 members. Almost 18 million people.

In the meantime, the alliance is now also growing on a European level. In June, 35 cities signed a declaration on this at the invitation of Potsdam and Palermo. And this international alliance is also growing. All these cities have democratically legitimised their decision, many of them through resolutions of their councils.

But here, too, there is an example of media that consciously or unconsciously, at least disparage the democratic decision through linguistic exaggeration.

One example, but there are several:

In a commentary for SPIEGEL-Online, Nikolaus Blome equated cities that offer their own refugee reception with bill collectors from his student days, because these cities “virtually order refugees” but do not pay the entire costs. Such a statement mocks the work of many people in working for integration, and reduces the constitutional right to asylum to a monetary aspect.

Is one fundamental right of our constitution worth less than the other or can it be mocked just because it costs money? Do such statements lead to democratic resilience?

Instead of permanent aggravation on this issue, and in my opinion this applies not only to politicians but also to journalists, what we need is to look for a consensus that is able to be implemented. It is about a moral pragmatism to reunite large parts of our society.

It is about winning back, or giving a voice to, those who are, so to speak, caught between the fronts of the populists. Who feel that their voice is hardly heard in the current political debates. Not because they aren’t shouting loudly and no one is listening.

But because they do not feel they belong to either of the two supposedly loud fringe elements, but are the centre of our society.

Those who do not want to see themselves as citizens of the world or as nationalists. But this also requires differentiated reporting. After all, there is no law that compels politicians or journalists to use populist tactics.

There are citizens all over Europe who see sea rescue first and foremost as a humanitarian duty, but for whom the question of a fair distribution of tasks, organised procedures and social integration in the refugee issue are important. People who at the same time do not want to see Europe’s external borders called into question.

However, the fact that many cities feel there is a will and a way is currently not given any space in a polarised media debate on the issue of migration. In the future, we need a discussion about the necessity of immigration that is free of populism!

In the coming years, we will have to master major challenges in Europe: demographic change and a shortage of skilled workers. Is that even possible without immigration?

I wish, and with this I have a wish as chair of the M100 Advisory Board to the media:

Inform people more about possible lines of compromise. As far as I am concerned, build up pressure on politicians to seek compromises.

Create echo chambers for a dialogue that creates a climate in society that contributes to ending the European stalemate on refugee policy.

We can no longer ignore this question or exacerbate it any further. This is toxic for our social cohesion.

We need a strong, credible, debatable and defensible democracy.

Because it is only when it is strong, credible, open to discussion and able to defend can it also be resilient.