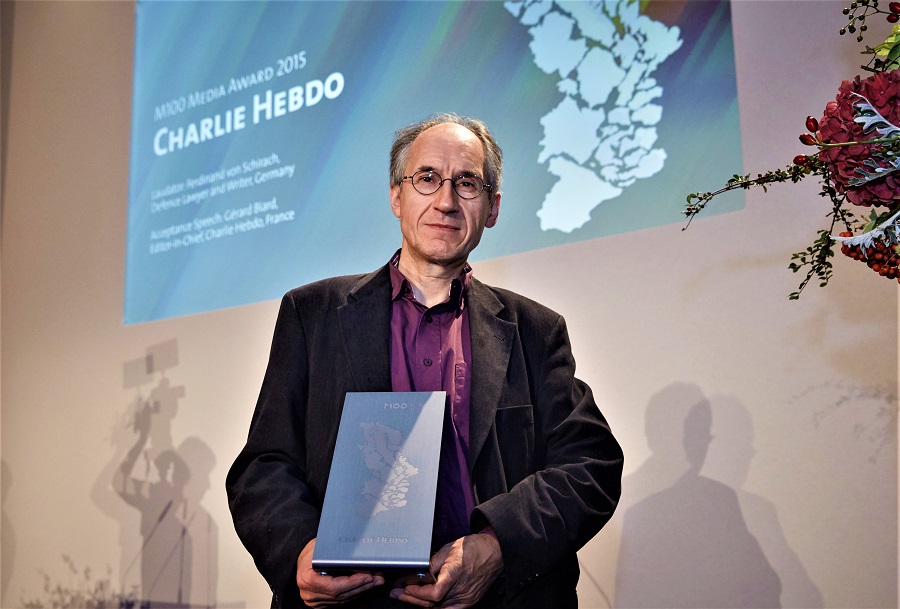 7 January 2022. 7 years ago today, on 7 January 2015, 12 people were killed in a terrorist attack carried out by two perpetrators with Islamist motives on the editorial office of the satirical magazine Charlie Hebdo in Paris; the victims include 8 Charlie Hebdo employees and the publisher Stéphane Charbonnier. In 2011, the offices were also subject to an arson attack, following the publication of special edition on the electoral success of Islamists in Tunisia.
In recognition of the epochal significance of Charlie Hebdo’s ordeal, the board of the M100 Sanssouci Colloquium awarded the editorial team and its editor-in-chief Gérard Biard with the M100 Media Award in September 2015.

Gérard Biard, who accepted the award in Potsdam, said in his acceptance speech: “The beliefs and values we advocate are universal values, and as such, belong to all citizens of the world.” For this reason, all citizens of the world should stand up for them, he added. “Despite what has been claimed, we have never criticized Islam or Muslims. We criticize Islamism as a political ideology.” The first victims of “totalitarian Islamism and its henchmen” everywhere around the world are always primarily Muslims”.
“This award today honours the dead – and it honours the survivors,” said the well-known writer and defence attorney Ferdinand von Schirach in his laudation honouring the magazine. The fact that “Charlie Hebdo” continues to exist is itself a victory, he added, noting that if satire outrages nobody, it is meaningless.
The political keynote was delivered by the then Federal Foreign Minister Frank-Walter Steinmeier.