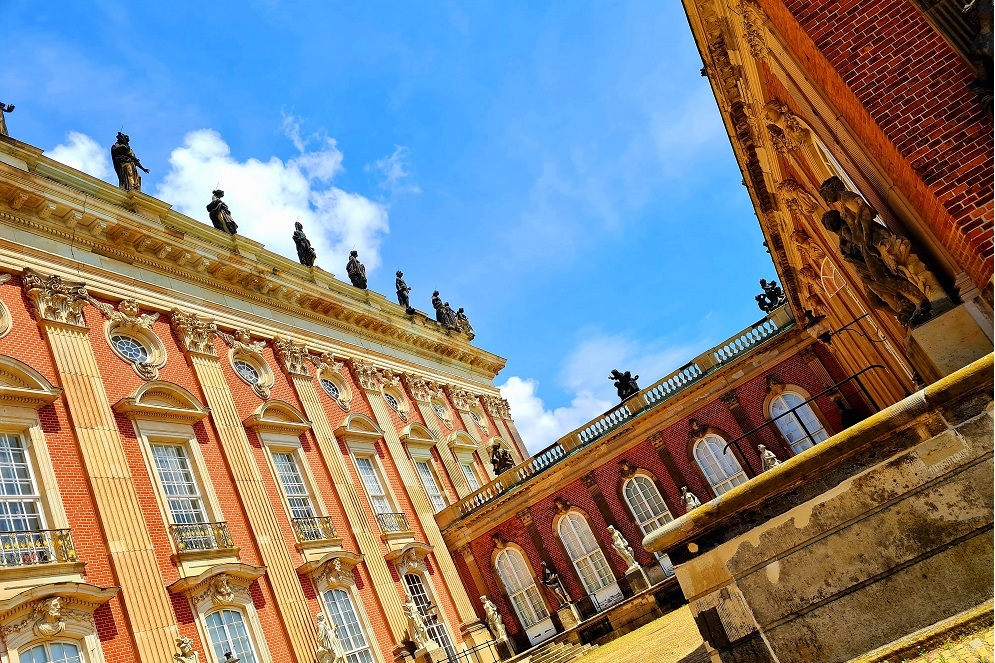 “From Crisis in Perpetuity to Democratic Resilience” is the title of the 17th edition of the M100 Sanssouci Colloquium, which will take place on 6 October 2021 as a hybrid format online and in the baroque palace theatre of the Neues Palais in Potsdam. Around 100 media and opinion makers are invited to discuss in various sessions leadership (post-)Corona, how we can handle an era of seemingly “perpetual crises,” and the responsibility of and current challenges facing the media in this situation.

The 21st century began as an age of disruption. The year 2021 could mark the preliminary climax of this development: not only will the consequences and distortions caused by the COVID-19 pandemic become clearly visible, but a political shake-up is also imminent as Angela Merkel’s chancellorship comes to an end. This comes at a time when the pandemic is confronting governments around the world with a veritable stress test that is revealing clear deficiencies and weaknesses in digitalisation, infrastructure and, in a broader sense, governance.

Whether it be Corona, the financial and euro crises, the global refugee crisis or BREXIT (not to mention the climate crisis, which is repeatedly subsumed by all the other crises), crises have become the sign of our globalised, digitally networked world.

The acceleration of digital progress and simultaneously of crises seem to be mutually dependent. Tweeting heads of state, fake news, and debates that appear to bring societies to the brink of a nervous breakdown are shaping our public spheres. This raises the question of how to prevent concrete, factual political problems, such as migration or a pandemic, from turning into cultural conflicts, crises of representation, and ultimately democratic crises.

Journalism and media are both the symptom and driver of these developments, and therefore their relationship to science and politics deserves special attention in the context of the conference. Ultimately, both media firms and political institutions worldwide are confronted, in remarkable parallelism, with very similar and similarly massive social and technological disruptions.

According to the logic of the large Silicon Valley platforms and their algorithms, which are optimised for profit and not enlightenment, the media is involved in an increasingly competitive environment in which the struggle is to evoke the strongest emotions and most daring interpretations. There is less room for ambiguity, unpredictability, and processual quality, all of which are inherent in democratic problem-solving; however, there is plenty of room for fake news, hate speech and disinformation.

Furthermore, the danger of authoritarianism is also present. The freedom of expression and freedom of the press have come under intense pressure, especially in authoritarian countries such as China, Iran, Russia, and Saudi Arabia, which are using new strategies and instruments to destabilise democracy and human rights across the globe.

However, there are also examples that demonstrate how journalism can benefit during crises by providing the public with carefully researched facts. In a recent report, NED highlighted several examples in which independent, investigative media outlets had debunked misleading news reports on the COVID-19 pandemic in the news and on social networks, while also engaging in traditional reporting. Such journalism caused a striking increase in user and subscriber numbers.

Corona will not be the last crisis that we face, the pace of change will not slow down, and our public sphere will continue to change. The “digitalisation of democracy” with all of its advantages and disadvantages has been underway for a long period of time, but its outcome is still uncertain.

Fundamental principles, especially essential journalistic and democratic processes, are now being put to the test. It thus becomes ever more urgent to discuss the following questions and to take stock of the current situation:
What have we learned from the pandemic? How crisis-proof is our democracy and how must it change? What is the current relationship between politics, science, and the media? How can we achieve social self-assurance even when permanently confronted with crises? What makes people in Europe once again so susceptible to anti-democratic, autocratic forms of rule? Why do more and more yearn for “a hard hand and a strong state?” What role does the media play in these worrying developments? How can independent media powerfully counter this? Or put another way: what can we and what can the media do to ensure that our democracy does not eventually rupture?

The subject of the M100 Sanssouci Colloquium 2021 includes strategies for developing democratic resilience, as well as questions concerning what responsibility the media has in this situation and what contribution the media can make.