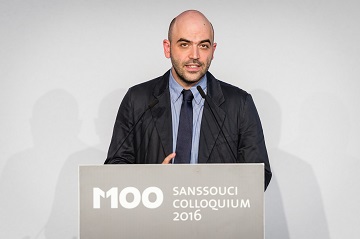 Italian author and journalist Roberto Saviano has been recognised with this year’s M100 Media Award. The award will be presented under strict security precautions in the Orangery of Potsdam on the evening of 15 September to mark the end of the M100 Sanssouci Colloquium international media conference.

Ten years ago, Saviano published the journalistic novel “Gomorrah: Italy’s Other Mafia” (“Gomorra – Viaggio nell’impero economico e nel sogno di dominio della camorra”). In it, he describes in detail the practices of organised crime and its links with legitimate business structures and politics as well as openly publishes the names of the parties involved. The book, for which he worked for years as an undercover dockworker, catapulted the then 26-year old to fame. The book was translated into 51 languages, made into a movie (which received an ®Oscar nomination in the category “Best Foreign Film”) and filmed as a TV series. Saviano has written additional books on the Mafia, including “The Opposite of Death”, “The Struggle Continues: Resisting the Mafia and Corruption” (“Der Kampf geht weiter: Widerstand gegen Mafia und Korruption”) and “Zero Zero Zero”, published in early 2014.

Since publication, Saviano and his family have been threatened by the mafia. Now under police protection, he lives a life underground, sharing the fate of an increasing number of journalists in Europe and worldwide who are threatened, imprisoned, tortured or killed because of their work.

“Through his research on the Mafia, Roberto Saviano has been made vulnerable; he has paid for his courage with a life of invisibility”, says ZEIT Editor-in-Chief Giovanni di Lorenzo, who will deliver the laudation. “The recognition that this award will bring him is thus extremely important: It provides a level of protection against attacks and threats that are all too common to Saviano – and shows not only him, but all those who risk life and limb to speak the uncomfortable truth that their work is not in vain!”

The political keynote speech, which introduces the award ceremony, will be delivered by Federal Chancellor Dr Angela Merkel. Following 2006 and 2010, Chancellor Merkel is making her third appearance at the M100 Sanssouci Colloquium.

The M100 Media Award, which is part of the international media conference M100 Sanssouci Colloquium, is presented each year to honour individuals who have left their mark on the world and who have taken a stand for democracy, freedom of expression and freedom of the press. Previous recipients include the editorial staff of the satirical magazine Charlie Hebdo last year, Vitali Klitschko, Kurt Westergaard, and Hans-Dietrich Genscher.