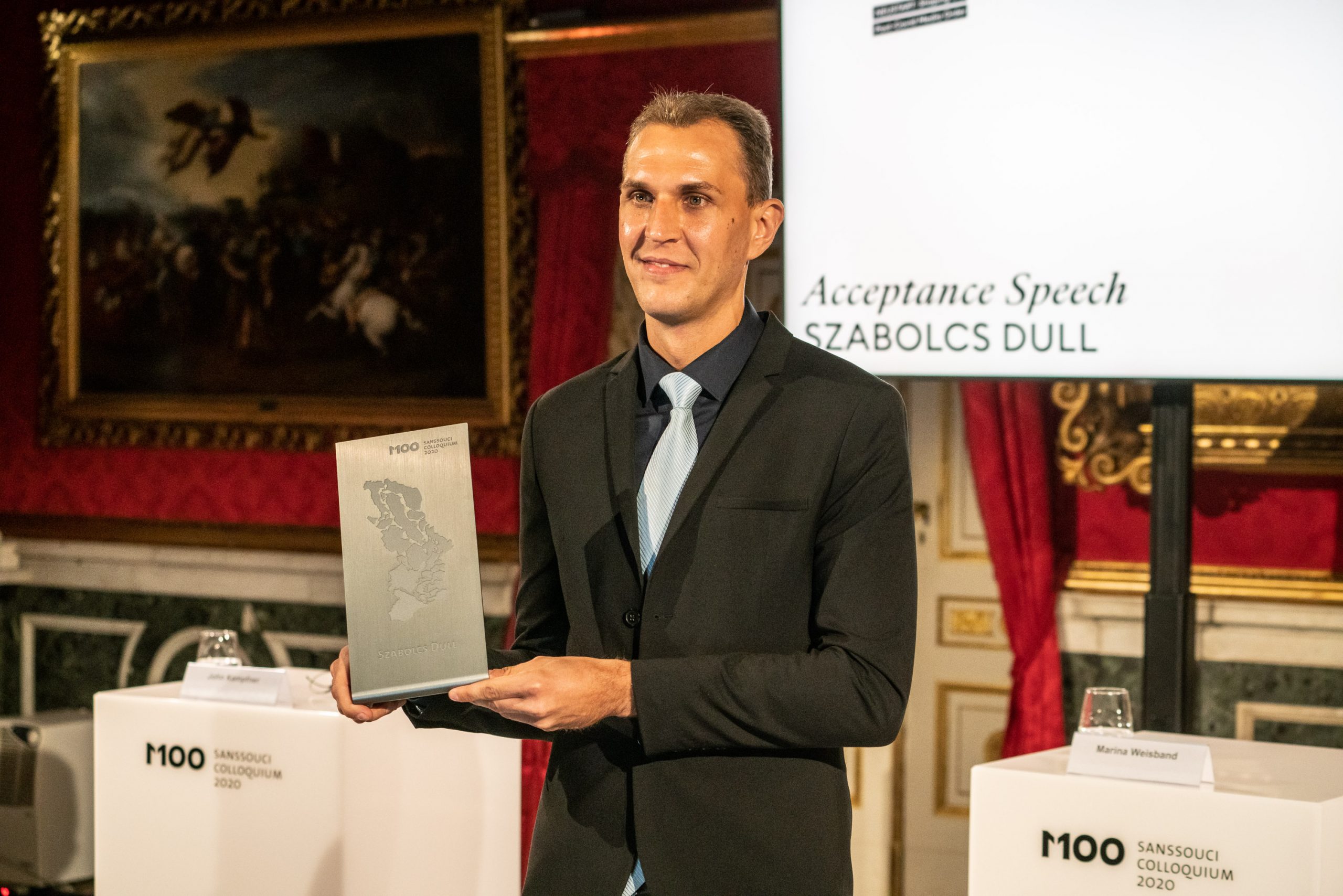 Potsdam, 17 September 2020. The M100 Media Award ceremony honoring Hungarian journalist and former editor-in-chief of index.hu Sczabolcs Dull marked the end of this year’s M100 Sanssouci Colloquium media conference in the Raffael Hall of Potsdam’s Orangery Palace. This year’s prize was awarded to Szabolcs Dull in recognition of his outstanding commitment to media freedom and independent journalism. The M100 advisory board expresses its solidarity with the 36-year-old journalist, his efforts to champion the basic right of press freedom, and his battle against outside interference in editorial decision-making.

In her opening remarks, EU Commission Vice-President Věra Jourová expressed concerns about attacks being made on the media that restrict editorial freedom and thereby weaken a country’s democracy. She also announced a series of EU initiatives aimed at strengthening democracy, the rule of law, basic rights and the media, which are to be introduced by the end of the year. This historic recovery plan is explicitly designed to support the media industry and promote respect for its independence.

German Vice-Chancellor and Minister of Finance Olaf Scholz delivered the evening’s keynote address in which he underscored the fact-driven nature of truth and the need to distinguish between facts, certainties and rumors. He also discussed how journalists and the work they do are needed to allow for a shared public perception of the facts. This makes it all the more important to honor those who courageously stand up for such matters. Democracy needs the public sphere, public debates and accessible facts. Freedom in a society is not only a matter of majority rule; it is a right that protects minorities and diversity. “Free, high quality and fact-based journalism is therefore clearly systemically relevant.”

In her speech honoring Sczabolcs Dull, Council of Europe Commissioner for Human Rights Dunja Mijatovic emphasized the importance of independent journalism: “Every time the independence of journalists is undermined, the institution of democracy is eroded. The extent to which journalists can enjoy freedom and pluralism is a litmus test for the state of a democracy. Unfortunately, Hungary is failing this test. We must therefore choose a side. We must stand up to protect journalists like you, Szabolcs, from undue interference. We must act with resolve and help those in Hungary who are trying to strengthen democracy and accountability. We must increase our efforts to re-establish media diversity and pluralism.”

In his acceptance speech, Szabolcs Dull emphasized that he would like to share the M100 Media Award with all the colleagues with whom he has worked to protect the freedom of the press. Most members of the 90-person newsroom have resigned, demonstrating their refusal to subject themselves to compromise and work under external pressure. Addressing his colleagues, he stated: “Let us not be silent. Let us not be silent about our history, let us not be silent about our principles and the truth, and let us never be silent about what is happening in Hungary, in Europe and in the world. Because that is what freedom of the press is: Telling as many people as possible exactly what’s happening in the world.” Pointing out that what has happened to index.hu affects us all, he continued: “Standing up for a free and independent press is not just a matter relevant to Hungary; this is about our common European values. Our story is a European matter.”

“NEUSTART: Shaping the Post-Covid Media Order” was the title of the international media conference M100 Sanssouci Colloquium held in the afternoon, before the award ceremony. The online digital format was a first for the high-level event that allowed nearly 100 journalists, experts and politicians from across Europe to meet virtually and discuss the post-COVID media order. The conference began with remarks by Timothy Garton Ash, Professor of European Studies at Oxford University. The conference featured roundtable discussions exploring how Europe’s media landscape can secure its long-term viability and address challenges such as fake news, the dominance of large platforms, financing difficulties and societal polarization. Held in parallel, each roundtable examined these issues in terms of economics, politics or society, respectively.

Participating experts included Neera Tanden, president of the Center for American Progress, Jim Egan, CEO of BBC Global News, and political scientist and author Yascha Mounk. The strategic implications of each roundtable were summarized in the closing plenary discussion, “The path Ahead,” which began with introductory remarks by the US activist Cory Doctorow. The crisis in journalism, which has been exacerbated by the impact of the coronavirus pandemic, has brought Europe’s media order to a crossroads: “As democratic societies, we need to think now about the kind of public sphere and the kind of media landscape we actually want to live in,” said Leonard Novy (IfM), member of the M100 advisory board, in conclusion. The EU member states, he emphasized, have to work together in determining their digital future.