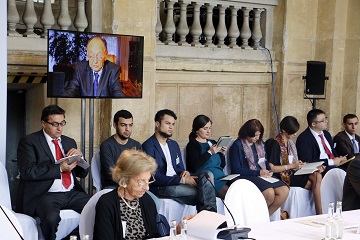 Unfortunately, the former Vice Chancelor and Foreign Minister Genscher could not take part in the M100 Sanssouci Colloquium 2015 on health grounds. Instead, he sent us the following Video Message.

(1) Define your core values and vital interests – equally, understand the values and respect the interests of your partners and adversaries!
We the Germans did it by our consistent and unequivocal engagement for PEACE (in capital letters!), for freedom and democracy, for the full respect of human rights, for the rule of law, for social justice and for economic and social well-being.
Our Constitution, the “Fundamental Law” of 1949, which in 1990 became the Constitution of the reunited Germany as well, encompasses all these values.
I believe they guide and determine our society and political life in an exemplary fashion.

(2) Look for the right partners in defending and advancing your objectives!
Yes, indeed , Germany chose good partners – now  friends! – in the Western Alliance, with the transatlantic relationship, and, most obviously, in the European Union (now with 28 members and still many applicants).
Furthermore, Germany entertains, to the mutual benefit of all, good relations and comprehensive cooperation with all the other neighbours in Europe and with countries around the world – and will continue to do so!

(3) Never, never give up dialogue!
Based on Germany’s long, at the end, however, rewarding experiences since 1945, dialogue clearly constitutes for us the indispensable instrument in addressing international conflicts and crises.
It helps avoiding misunderstandings and better appreciating the interests of the other side.
Without doubt dialogue is the precondition for finding mutually acceptable solutions.
That takes time, including frustration and setbacks, but it can succeed.
One very recent event does prove it: the signing of the nuclear treaty between Iran, the five permanent members of the UN-Security Council, the EU and, I am proud to say, Germany.

(4) Always prefer confidence-building and cooperation to confrontation!
The depressing situation in and around Ukraine remains most critical and dangerous.
The annexation of the Crimea has clearly violated international law and the principles of Helsinki.
Accordingly, the mutual trust between the states involved has been virtually destroyed.
Communication and negotiations are therefore existentially important to rebuild trust and to resolve the outstanding conflicts.
The two Minsk accords continue to provide the basis for the urgently necessary efforts to get peace in the Ukraine in accordance with international law.
Germany, through Chancellor Merkel and Foreign Minister Steinmeier, is doing everything possible to help.
They deserve our gratitude and support!

(5) Stick to your obligations and use the existing international institutions and fora!
The United Nations for the whole world and the OSCE (the institutionalized CSCE) for Europe have become most valuable organizations for conflict prevention and, to some degree, conflict resolution.
They, too, need much more support.
Germany continues making quite a substantial contribution to their commendable concrete peace-building work.
In addition, other fora must be employed in times of crisis, for example, the – at present – grossly neglected consultative mechanisms established together by NATO and the Russian Federation.
When would be the right moment to call them into action, if not NOW?
Last, but by no means least, the Paris Charter for a New Europe of November 1990 has still to fulfil its ambitious promise to create a peaceful, free and prosperous community of cooperative partners in a constructive interdependence from Vancouver to Vladivostok.

(6) Solidarity with the people in the developing countries and with the refugees everywhere.
In Germany, in Europe, in Africa and Asia, we experience today an evergrowing increase in refugee movements: with most dramatic, tragic personal consequences for the men, women and children affected.
The way we personally and our administrations receive them in our countries and, yes, also in our homes and care for them, both at the national and the European level in Brussels, is just now becoming the most pressing challenge for our societies.
The answer must be – without any delay! – a concerted, truly large-scale European response – in the spirit of solidarity and generosity, in respect of human dignity!
On the basis of these six lessons for decision- making , let me offer to you an “Agenda for Europe and for the World”.
This is no doubt quite ambitious, but not at all utopian: it is absolutely necessary!
– Global and European challenges can be only resolved together – and certainly not without Russia or even against our most important partner in Europe.
– We need a vigorous relaunch of the European Union – not sometime, but — now –, to prepare the EU in all policy fields for the future.
– The “Charter of Paris” must be fully put into practice in order to ensure a durable and cooperative future for the entire Transatlantic Area from Vancouver to Vladivostok.
– We need a fair and just “World Order for Peace” in the spirit of global neighbourhood.
– And, in the last analysis, we need a comprehensive — “Agenda for World Peace” — especially for the advancement of world-wide disarmament and arms control, with the overriding aim of pushing ahead nuclear disarmament – so urgently needed!

Ladies and Gentlemen,
globalization has transformed  the world, — our– world, into a Community for Survival.
This challenge cannot be ignored and it won’t simply go away.
There is no choice : We all, as Germans, as Europeans, as citizens of the world, have to face it and to master it – together!
Let me conclude by quoting John F. Kennedy, five months before he died.
I believe his words are still relevant today: “Our most basic common link is that we all inhabit this small planet.
We all breathe the same air.
We all cherish our children’s future.
And we are all mortal.”
Thank you for your patience.
I wish you a successful conference!