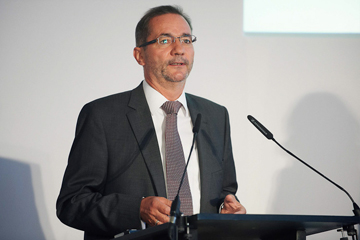 Potsdam, the capital of the state of Brandenburg, has teamed up with the Potsdam Media International association for already the seventh time in inviting editors-in-chief and other media producers to the historic palaces and gardens of Sanssouci for the international media conference M100. Brandenburg is proud to have established this prestigious media event in Potsdam and succeeded in attracting leading media professionals from both Germany and around the world to Potsdam year after year.

I would like to congratulate you for not allowing yourself to be led astray thematically by the magnificence of these historical surroundings. Instead, you have kept your focus on the program of this colloquium and its most timely of subject matters.

The theme of this year’s conference is “Global Democracy – A Triumph for Social Networks?” Ladies and gentlemen, the media uses verbal exaggerations, such as “global” or “triumph,” as an effective means of grabbing the attention of readers and listeners. But today, you, the media representatives, are alone among yourselves. This offers us a space in which we can analyze the so-called “Facebook Revolution” a bit deeper. For my own part, I would also like to give you some food for thought as a sort of thematic introduction to the matter at hand.

When I hear the phrase “global democracy,” I think we still have a long way to go. It’s still unclear which direction the states in the Middle East and North Africa will take in their future development. Of course, the revolutions in Tunisia and Egypt, the ongoing battle between rebel and loyalist forces in Libya, and the protests in Syria raise our hopes that people in these countries will someday enjoy self-determination. But, after decades of suppression, it has now become clear that the battle for an open society and human rights has really just begun.

Then there is the phrase “triumph of social networks.” Ladies and gentlemen, revolutions are and will continue to be created by people. New media forms can speed up the flow of information and give more people access to more information. But, without a critical mass of people – people who rise up against the political, economic and/or social status quos – there would never be any societal changes.

Over the last 20 years, the types of media and their speed have rapidly changed. At this point, allow me to recount an anecdote about the role that means of communication played in the peaceful revolution that began in the former East Germany, the GDR, in 1989. I first learned about this role in February 1990, while I was attending a meeting in the southern Bavarian town of Tutzing. The aim was to establish a so-called “government of national responsibility” instead of holding round-table talks, and one that also involved opposition representatives.

I was directly summoned to a telephone. On the other end of the line was an official from the Green Party in Berlin. He asked me if I was interested in assuming a ministerial position. At the time, I was a member of the “Grüne Liga” – or the Green League, a network of local environmentalist organizations – and not the Green Party. But the latter was apparently having trouble finding a candidate from within its own ranks so quickly. “The most important thing is that it’s a green,” the man explained.

I couldn’t make up my mind. But, then, a West German journalist who had somehow learned of the offer said to me: “You realize, of course, that people in the West have to work for 30 years before being asked to become a minister.” So I said yes. Indeed, at that time, many political careers were launched in the same or similar ways.

From today’s perspective, it seems odd that the Green Party would offer me, a member of another political organization, one of the ministerial positions it was entitled to. But that’s how things were in those turbulent weeks. And if I hadn’t been summoned to the telephone that day in Tutzing, chances are that I wouldn’t have become a minister. Indeed, my political career would have surely gone much differently.
Telephones were not very common in the GDR, especially private ones. Most of the people who had one were senior government officials or people, like doctors, who had to be quickly reachable because of their jobs. As a result, in opposition circles, news or messages were usually transmitted from mouth to mouth. Communicating via things like Twitter, text-messages or Facebook simply wasn’t an option.
But, even so, the people’s desire for change spread like wildfire. At first, only a few hundred participated in the so-called “Monday demonstrations” in Leipzig. Within a few weeks, that number had ballooned to hundreds of thousands. And similar demonstrations were soon being held in many other cities, as well.

I am telling you this to illustrate my thesis: that, at a certain point and in one way or another, a deterioration of political conditions will eventually give rise to a desire for freedom of opinion, human dignity and fairness.
Newer, faster and more globally networked media forms can speed up this process and exponentially expand the number of people who support such movements in spirit. And they might also play a role in causing regimes to collapse. But these kinds of media forms cannot be catalysts in and of themselves.

Thus, we should be focusing our gaze on the people, the people who take action, the people who rise up against a system after decades of being suppressed, humiliated and deprived of their rights. Indeed, we have every reason to praise the bravery of the mostly young insurgents in the Middle East and North Africa.

As someone who was personally involved in popular movements in the former GDR, I sincerely hope that you will enjoy much success in completing the revolutions in your countries and reshaping their political orders.
Still, the example of the Solidarity movement in Poland shows that setbacks are also possible. This year, on December 13, Poland will mark the 30th anniversary of the suppression of the Solidarity movement and the introduction of martial law.

However, this example from Poland also gives rise to hope because it shows that a movement for freedom can only be suppressed for a short time. Already in 1989, millions more took to the streets in an effort to change the status quo. They shared a single common goal. But what happened after this goal was achieved also shows just how differently people envisioned the shape of the new order to come.
The citizens of Tunisia, Egypt and Libya are now facing similar challenges. They must design a new process of change – one that involves as many people as possible rather than just part of the population, and one that does not exclude members of ethnic or religious minorities or people who hold different political views.
In this process and in the development of an independent media landscape, Europe and the entire Western world can and should offer their support. But, in doing so, Europe shouldn’t take a finger-wagging approach. Of course, it can provide advice, but this should come in the form of presenting the strengths and weaknesses of its own system.

Indeed, it won’t work to just superimpose cultural values and traditions that are foreign. One should also not lose sight of the fact that people in North Africa will initially have much more pressing issues to worry about than freedom of the press.
What’s more, we should also remember that the European Union itself has some deficiencies when it comes to such freedoms. Granted, countries that would like to become members of the EU must accept its Charter of Fundamental Rights. But, as soon as they become a member, they enjoy a considerable degree of autonomy when it comes to cultural issues. Indeed, I get very worried when I think about things such as the media laws recently enacted in Hungary.
Given these circumstances, I would at least be careful in answering the question of whether Europe – that is, the European Union – can serve as a model for the establishment of freedom of the press in Egypt, Tunisia or Libya.

Whether they are new or already enjoy a long history, democracy and media are not joined in an unbreakable symbiotic relationship. Authoritarian regimes can also use the media to pursue their own goals. The case of China, for example, shows how a country can put constraints upon Internet use. And, lastly, means of communication can also be monitored, and information manipulated.
Today’s conference aims to throw some light on the complexity of the relations between those in the media and those attempting to design new political orders. I hope your discussions will be both stimulating and informative. And I look forward to seeing you next year – right here in beautiful Potsdam!