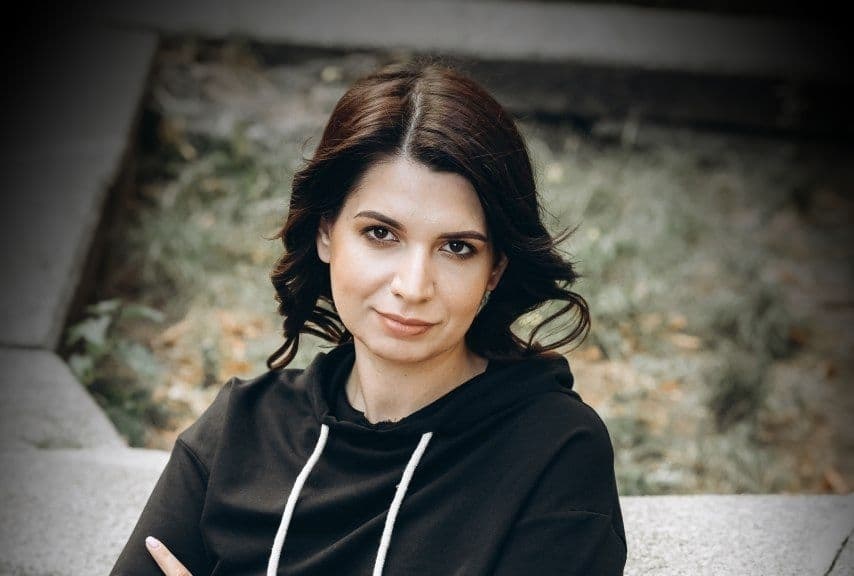 6 March 2022. “The children are the symbol of this war,” writes Olga Konsevych in an article published today in the pro-European British weekly “The New European”. “They travel for 15 – 20 hours on evacuation trains; they sleep fitfully in the overcrowded carriages and look anxiously through the windows of the train that is taking them into the unknown, at the destroyed world.”
Olga Konsevych is editor-in-chief of the Ukrainian news platform 24tv.ua and an M100 Alumna. In her article she describes her escape from Kiev and the fear and desperation of the Ukrainian people.
Here you can find her text in the original version.

“Imagine a morning: Your parents call you to ask if you are still alive. Imagine a night: Your home is being shelled to destroy you,” says Kyiv resident Lyudmyla.

Ukraine has been living in a state of war for eight years and has seen things that the rest of the world couldn’t see. Now everyone sees what is happening: the Russian army is violently killing children, civilians, destroying entire cities, even Russian-speaking cities, like Kharkiv and Kherson.

“We always knew it was going to happen,” says Vitaliys, 74. “We knew it not for a few days – we’ve been dreading it for months, at least. The things happening now are disgraceful, to put it mildly.

“It’s a dirty villainy. I just don’t want to swear. We all love our Motherland. We didn’t ask (Putin) to save us, we didn’t ask to save the Russian-speaking (people).” He says he would defend the city, if only he was healthy enough.

The Kyiv subway gets packed with people when the air raid alarm starts sounding. People hide there with their little kids and pets. Some families at first stayed at home, but later decided that it’d be safer to be in the subway.

But air raid shelters are not available in all areas of the capital. Some shelters are abandoned and not suitable for people to stay there. Lucky are those who have parking space in their buildings, which can be used as one more place to hide. People gather there with camping maps, sleeping bags, blankets and minimal food supplies.

Kyiv residents say that the most difficult time was the period of extended curfew that lasted from 5pm on February 26 till 8 am on February 28. On Monday morning people were queueing at the shops. People were afraid to go outside, but were happy to have a chance to do so.

But domestic problems didn’t break the spirit of Ukrainians. They united, and support each other, as they did in 2014.

Serhiy Prytula is a famous Ukrainian TV host and activist, but war has changed the life of every Ukrainian. Now, he has gathered together a group of volunteers. Some of them deal with logistics, some with communication, others with sorting and transportation of the aid, food, equipment. Aid comes from other regions, in particular from the west of Ukraine. Other countries have also actively joined in – today the whole world is worried about Ukraine.

“We just kneel before the Armed Forces of Ukraine and are immensely grateful to them. If it wasn’t for them, the whole of Ukraine would be on fire now. We are with them, supporting and helping with everything we can.

“Today, all Ukrainians are united into one strong monolith. We all work together for our victory and fight with Russian bastards who invaded our land,” says Prytula.

Not only military forces are defending Ukraine, but also the territorial defence – volunteers, who have undergone intensive training. Some of them are former military, some are civilians of different professions.

Viktoriya, who moved from Kyiv to the Zhytomyr region on the first days of shelling in Kyiv, says: “I don’t even remember anymore for how long I haven’t seen my husband. I started taking sedative medication after I almost broke my laptop while working on it, as I heard the air raid alarm. I am scared because I am losing my temper, even though I’ve always thought I was a person with a cool head.”

Now, she hides from shelling with her parents, volunteers at a field kitchen and waits for her beloved husband to return from war, since he has joined the army to protect Ukraine.

It seems that the war has just started, but for Ukrainians the time drags on agonizingly slowly, as if we have been living with destroyed cities, bridges and hopes for years. Everyone you talk to about war feels the same. Ukrainians are praying even in their basements; they bring icons there with them. They are praying for Ukraine, ther relatives, beloved ones and children.

Especially for the children, because they are the symbol of this war. They are travelling for 15-20 hours in evacuation trains; they sleep restlessly in the crowded carriages, fearfully looking at the destroyed world through the windows of the train that is taking them to the unknown.”