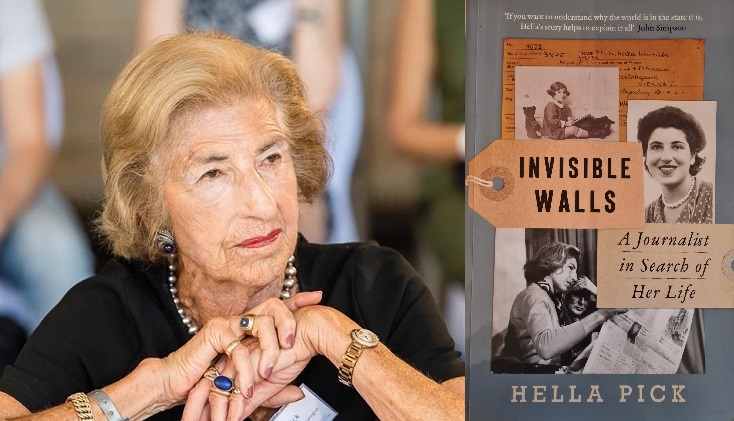 19 November 2021. Hella Pick, legendary journalist and mentor, the doyenne of M100, Lord Weidenfeld’s right and left hand for decades and still active and travelling the world, has written her memoirs: “Invisible Walls. A Journalist in Search of her Life” is the title of her impressive and well-worth reading memoir, which will be published in German by Czernin in Autumn 2022. The original English edition was published by Weidenfeld & Nicholson last Spring.

„Hella Pick lived through, and reported on, many of the most seismic moments of the past fourscore years or so. Now she turns her exceptional reporting skills on herself – and the result is fascinating, moving, truly inspiring”, writes Alan Rusbridger, former editor-in-chief of the Guardian.

Anne McElvoy, Senior Editor and Head, Economist Radio, UK, writes: “An extraordinary life, told by veteran among Foreign Correspondents who reported in-depth on the forces which shaped the Cold War – und its uneasy aftermath. From the building ot the Berlin Wall to ist demise, the scamble for Africa, power play pf Washington and New York and rise of China, Hella Pick has been on hand with her notebook and keen eye. Her odyssey from a child sent to Britain in the ‘Kindertransport’ to doyenne of the foreign corps is a rich journey of discovery – professional and personal.”