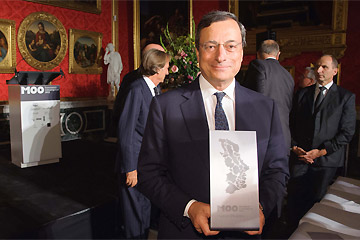 Mario Draghi has been honoured with the M100 Media Award 2012. The President of the European Central Bank has come to Potsdam from the highly anticipated ECB council meeting in Frankfurt. The M100 Media Award has been presented as part of the international M100 Sanssouci Colloquium media conference in the Raphael Hall in Potsdam. The M100 Advisory Board is awarding Draghi in recognition of his commitment to stabilize the Euro and stabilize the European house by all means.

Federal Finance Minister Dr. Wolfgang Schäuble will deliver the main speech at the presentation of the M100 Media Award. This is the second time – following 2007 – that Schäuble has been won as keynote speaker at the Colloquium.

The laudators for Mario Draghi are: Dr. Paul M. Achleitner, Chairman of the Supervisory Board of Deutsche Bank AG since May 2012 and Luca di Montezemolo, president of Ferrari since 1991 and elected ”Europe’s manager of the year 2012” by the European Business Press Federation (EBP).

”Once again, this year’s M100 media conference is dealing with a politically hot topic,” comments Potsdam’s Lord Mayor Jann Jakobs, who is also Chairman of the M100 Advisory Board. ”I very much appreciate recognizing the achievements of Mario Draghi in preserving the European monetary union. I expect a lively exchange and stimulating discussions on the issues of our time in this area of conflict between European ideals and fiscal realities.”

M100 Executive Director Moritz van Dülmen, “We are delighted that Mario Draghi and Wolfgang Schäuble as two of the most important political actors of current European fiscal policy are taking the time to personally come to Potsdam, underlining the importance of the pan-European dialogue at the annual M100 meeting in Potsdam.”

Mario Draghi, born on September 3, 1947 in Rome, has been president of the European Central Bank since November 1, 2011. Since then he has been fighting by all available means to preserve the Euro and to stabilize the Eurozone. He has stipulated that the primary task of the ECB is to maintain price stability and to protect the savings of Europeans.