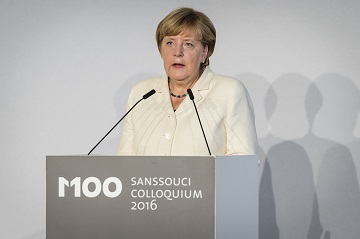 I certainly would not want to anticipate the laudation speech Mr di Lorenzo will be holding right after mine. But I could not give my thoughts on the topic of this year’s Colloquium, ‘WAR OR PEACE: The Return of Geopolitics, Disintegration and the Radicalisation of Society in Europe’ without addressing a few words to you, Mr Saviano, the winner of the 2016 M100 Media Award.

This is the third time I have had the privilege of speaking at the ceremony for the M100 Media Award, a distinction given to individuals who have left their mark on Europe. The award sees itself explicitly as a European prize. It honours achievements in democracy, freedom of speech and freedom of the press.

Your work, Mr Saviano, combines all of these three aspects: a lasting impact, a clear commitment to Europe and an outstanding contribution to press freedom. As you yourself once put it: “Freedom of the press is a right that is not always guaranteed. If we neglect it, it wilts like a flower that one forgets to water.”

I can only agree. We must continue to defend freedom of the press time and again, always bearing in mind how quickly this right can be endangered – even here in Europe. One need only think of journalists and media representatives in Turkey, who are facing a very difficult situation at the moment. Can Dündar, one of your guests here in Potsdam, is a very important example. Our discussion about the situation of the media in Turkey in particular shows that freedom of the press has a great deal to do with the absence of state interference and censorship, but that is not all. Press freedom involves much more than that. It also includes the freedom to uncover abuses and to report on them without fear of reprisal or even personal endangerment.

This comprehensive understanding of freedom of the press is what you stand for, Mr Saviano. It is something you have been fighting for continually, every day, ever since you published your book Gomorrah ten years ago. We can hardly fathom the kind of fear you suffer and the restrictions you have had to endure as a person forced to live in the shadows. We can also hardly imagine the amount of courage you have to muster every day as you continue to persevere, to not give in, and continue to produce your work.

Unfortunately, ladies and gentlemen, Roberto Saviano’s fate is not happening just anywhere in the world, but right here in the middle of Europe. We must also realise that this is not even the only time an author in Europe has been under threat. Just last year, the French satirical magazine ‘Charlie Hebdo’ was awarded the M100 Media Award after a majority of its editors had been killed in a barbaric act of terrorism a few months earlier. In 2010, the prize went to Danish cartoonist Kurt Westergaard. He also had to accept that his work had a major impact on his life, and he continues to live with those consequences today.

And yet, freedom of the press is only worthy of the name if it can also be lived. Unfortunately, and all too often, this takes real courage on the part of committed journalists and authors. You, Mr Saviano, embody this courage as few others could. This makes you a shining example. And for that, you deserve all of our gratitude and respect.

Ladies and gentlemen, just as the M100 Media Award is understood to be a European prize, the colloquium in which the award is being given today focuses on the situation in Europe. This year, the organisers have chosen the theme ‘War or Peace’. Hearing these words, I personally am immediately reminded of the famous words of former Chancellor Helmut Kohl, who warned that ‘Europe remains a question of war and peace’. This sentence is particularly resonant and credible coming from a man who experienced the catastrophe of World War II first hand as a child and teenager. The concept might be difficult for many of us in younger generation to understand today. And yet: The sentence is no less true now. It is correct. Because it is always about war and peace, or – to pick up on the title of your colloquium – war or peace.

It doesn’t have to be guns and tanks that immediately spring to mind, but rather the gradual processes by which nationalism, selfishness and radicalising tendencies complicate or even sabotage joint European action. 71 years of peace in Europe – that is a long time from an individual’s point of view, the span of a human life. And yet, viewed within the larger course of history, it is no more than a blink of the eye.

Because of this, we must never forget that it is largely thanks to European integration that we no longer live on a continent of war, restricted freedom and antagonism, but in what is still a union of peace, freedom, prosperity, stability and good neighbourly relations. The European Union has achieved far more in its history than past generations could have ever imagined. Even with major historical trajectories aside, we benefit daily from European integration in our everyday lives, often without even being conscious of it, including unrestricted travel, our common currency and diverse personal encounters.

It is up to us to defend those who are active and honour these achievements every day, particularly when they have been tested tremendously in recent years. Think of the global financial and economic crisis that shook Europe. Think of Russia’s aggression toward the Ukraine, and its consequences for both the people there and our own relations with Russia. Think of the deep cut we experienced when the British electorate voted to end their country’s membership in the European Union. Think of the fact that it isn’t just our own European economic and social system that we have to contend with; we also have to assert our values and social model in the midst of tough global competition. Think, too, of the many global problems that we in Europe can only take on together: the fight against international terrorism, climate protection and especially the many people coming to Europe to save themselves from war, persecution and extreme hardship.

I am not exaggerating when I say that, on the whole, the state of European affairs is not at all good at the moment. This pains me. And I am doing everything in my power to ensure that we reawaken what this community once stood for: solidarity and a cohesion of values. I am convinced that isolating Europe from the world’s problems in the 21st century would not only go against our values and interests; it would actually be impossible without suffering grave disadvantages ourselves.

Since no later than advent of modern communication technologies and globalisation, we have to abandon the idea that wars, conflicts, poverty and misery in other parts of the world have nothing to do with us. They do. This is especially true when they befall our immediate neighbours. The European Union borders not only Iceland, Norway and Switzerland, but Russia, Ukraine, Syria, Libya and Egypt as well. We have to understand that the situations in these and other countries will be very complicated in the long run, and are bound to affect us one way or the other.

At the same time, we Europeans can and must recognise that we are not helplessly at the mercy of what is happening around us: on the contrary. The closer we stand together as the European Union and the more united our stance, the more we will be able to exert influence on, help shape and change global developments. Of course, the reverse is also true. The less united we are in taking action, the less we can assert our values and interests in the world. That is why I will never let up on my commitment to a united Europe. No lone European country is equipped to handle the urgent challenges of our time and remain globally competitive over the long term.

It is now more crucial than ever to defend the values and achievements of a united Europe, which has given us so many freedoms, in these increasingly heated debates. It is more urgent than ever to oppose rhetorical oversimplifications, to resist simplistic national reflexes and walk the more complex, laborious, long-term but ultimately more successful European path instead.

Europe has to be capable of adapting again and again to new developments and needs; especially today, in the fast-paced world we live in. The British referendum in particular has shown us that we have to do much more to keep Europe together and continue to improve it. This will be precisely our topic at tomorrow’s summit in Bratislava.

At the same time, we must always keep in mind that many in Europe have very different ideas about what improvements need to be made at present and how they should be configured. This was underscored once again in the many conversations I have had with my counterparts and representatives of European institutions over the past few weeks.

This is why our discussion about ongoing development in Europe will not conclude in Bratislava, but will continue until next spring. At the end of this process, we want to have come to decisions that have real added value across Europe, that noticeably benefit European citizens and also find broad acceptance among the various member states and their populations.

This is not to say that we intend to shift power to Europe. A bold Europe, a free Europe, is not a Europe that regulates absolutely everything. It is a Europe that always makes decisions at the appropriate level for the best possible outcome – be it at the local, national or European level.

Ladies and gentlemen, we first of all need a Europe that promotes the prosperity of its citizens. To do this, we need to make the European Union more competitive and more innovative than it has been until now. Second, we need a Europe that can attract young people and renew their enthusiasm. To do this, we need the European Union to offer them better prospects than before – both by promoting exchange and mobility and by improving the labour market. Third, we need a Europe that works together to improve security and keep its citizens safe: from foreign and security policy dangers, from organised crime, from the threat of international terrorism, and from the dramatic consequences that exercising free speech and the freedom of the press can have for courageous individuals like Roberto Saviano.

Mr Saviano, the fact that one person’s courage to express and disseminate their opinion even in the face of mortal danger is combated so vehemently shows that this courage can actually make a difference. I hope, very sincerely, that your courage will one day be rewarded in that the grievances you describe in your work change for the better.

I wish for us all that Europe as a whole finds the strength it needs to weather the coming challenges together, and to remember what the European Union stands for: solidarity and a cohesion of values. Taking these to heart will allow us to emerge from this current phase better than we were when we went into it.