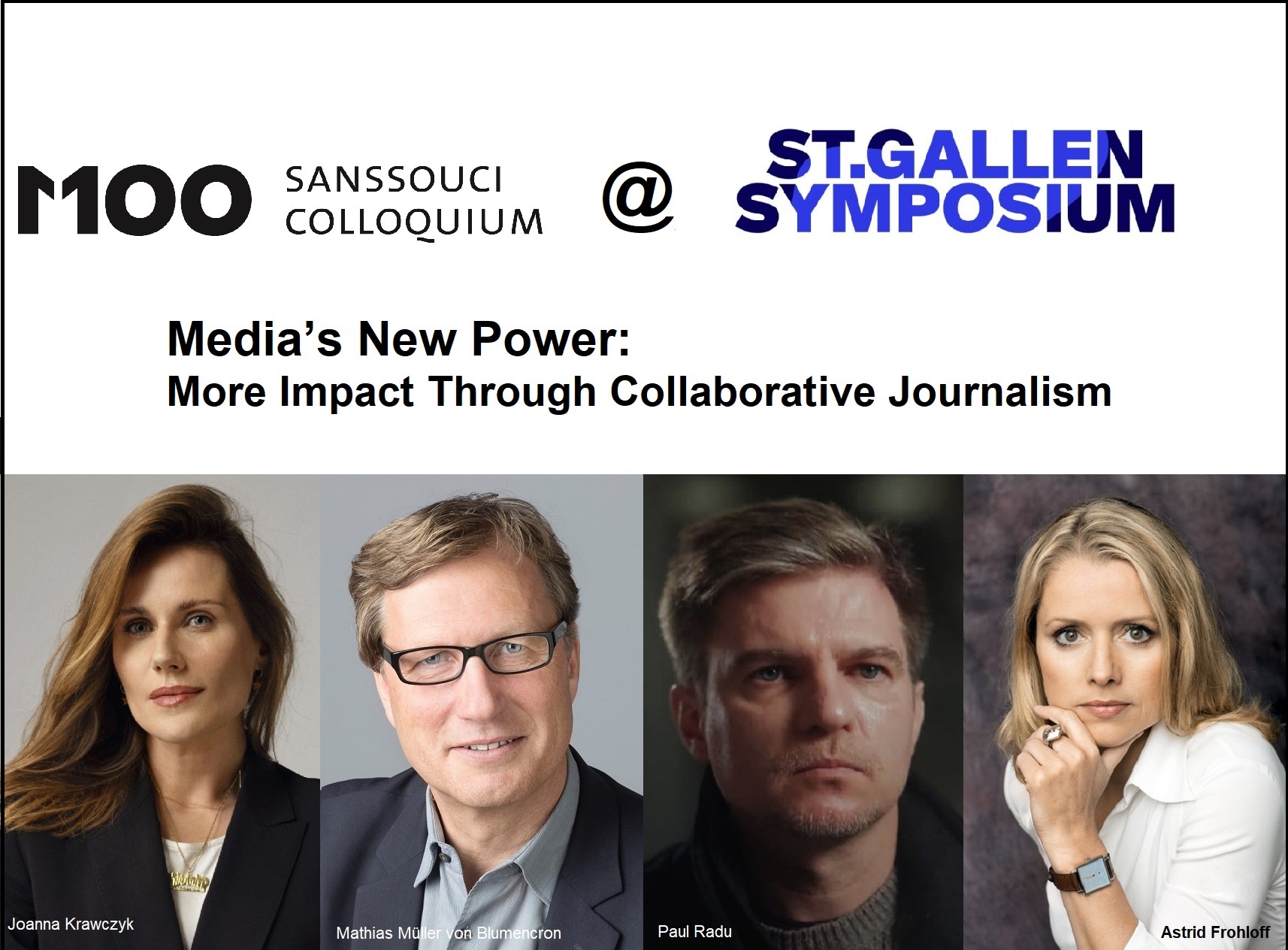 The St. Gallen Symposium will take place on 5 and 6 May under the title “Collaborative Advantage” at the University of St. Gallen.

At the M100 panel, entitled “Media’s New Power: More Impact Through Collaborative Journalism”, Joanna Krawczyk (Head of Partnerships at “Gazeta Wyborcza” and Chair of the Leading European Newspaper Alliance LENA, Poland), Paul Radu (Co-Founder and Co-Managing Director of the Investigative Network OCCRP, Romania) and Mathias Müller von Blumencron (Board Member Tamedia and Member of the M100 Advisory Board) will discuss the challenges of cross-border, cross-linguistic and cross-cultural collaborations and what they mean for the future of journalism. The panel will be moderated by TV journalist and M100 Advisory Board member Astrid Frohloff.

Astrid Frohloff
TV Presenter and Journalist
Member of the M100 Advisory Board
Germany
Astrid Frohloff is a well-known German television presenter, journalist, communications consultant and business coach. She focuses on solution-oriented television formats. Until recently, she hosted the investigative political magazine “Kontraste” (ARD). As a correspondent, she reported from various parts of the world – many years from the Middle East.
Amongst others Astrid Frohloff presented the political magazine “Klartext” (rbb), the programme “DAS! – Das Abendstudio” (NDR), the SAT.1 main news programme “18:30-Nachrichten” and the rbb talk show “Im Palais. Zu Gast bei Astrid Frohloff“. As a reporter, the journalist made her mark with Middle East reporting. For five years she lived in Jerusalem, where she set up a television studio and reported from political hotspots such as Iraq, Lebanon, Israel, Palestine, Egypt and Jordan.
Astrid Frohloff is co-founder of “Hellohybrid”, a consultant firm helping companies in setting up innovative event formats, mainly digital and hybrid events. Astrid Frohloff is a member of the jury of the “Deutsche Wirtschaftsfilmpreis” and the “Marion Dönhoff Preis”, as well as a member of the “Wissenschaftliche Gesellschaft für marktorientierte Unternehmensführung“. 12 years she was head of the board of “Reporters without Borders“.

Joanna Krawczyk
Head of “Gazeta Wyborcza’s” partnerships
Chairwoman of the Leading European Newspaper Alliance LENA
Poland
Joanna Krawczyk has 13 years’ experience in international relations and project management in media, civic and cultural sectors. She worked for NGOs from Poland and Europe, including Villa Decius Association, European Cultural Foundation, Institute of Reportage, Evens Foundation, and run media-related programs in collaboration with European Commission, Media & Learning Association (Brussels), Ethical Journalism Network, Media Literacy Network in Central and South-Eastern Europe and Konrad Adenauer Stiftung. She is involved with Poland’s largest liberal daily Gazeta Wyborcza, managing the paper’s media projects and partnerships, and Global Investigative Journalism Network, helping them to coordinate their international conferences.
Since 2 March 2021, Joanna Krawczyk, the head of “Gazeta Wyborcza’s” partnerships, leads the activities of the Leading European Newspaper Alliance – the largest media network in Europe. The main objectives of LENA, which the new chairwoman will work on, are: to develop business models for the media in times of crisis and to combine editorial work on important publications from all over Europe with promoting high-quality journalism. The content of 7 LENA-affiliated newspapers published in six languages reaches 100 million readers in Europe and the world.
In March this year. Joanna Krawczyk was elected a chairwoman of the Leading European Newspaper Alliance, an organisation created by the largest European newspapers. She is the first woman in this position. Krawczyk replaced Olivier De Raeymaeker, CEO of “Le Soir” (Belgium), who ended his two-year term as the chairman of LENA.
Joanna Krawczyk has been associated with “Gazeta Wyborcza” since 2017. She currently works as the head of “Gazeta Wyborcza’s” partnerships, while chairing the Gazeta Wyborcza Foundation and managing the activities of the Wyborcza Philanthropic Group. For many years, she has been collaborating with Polish and international non-governmental and media organizations, as well as European institutions.

Mathias Müller von Blumencron
Board Member, Tamedia, Switzerland
Member of the M100 Advisory Board
Former Editor-in-Chief, Der Tagesspiegel, FAZ.net, Der Spiegel
Germany
Mathias Müller von Blumencron is one of the leading journalists and digital media executives in Germany. Until July 2021 he worked as co-editor-in-chief at Berlins premier news organization Der Tagesspiegel, being responsible for the digital transformation of the organization. Before he worked from 2013 until 2017 as editor-in-chief digital media for Frankfurter Allgemeine Zeitung, implementing the successful digital strategy. Until 2013 he has worked for 20 years at the newsmagazine Der Spiegel, building up and leading Germanys most influential digital news site. He led Spiegel as co-editor-in-chief from 2008 until 2013. He serves currently on the board of the Swiss Media organization Tamedia.
Müller von Blumencron studied law before embarking on his journalism career. He graduated from the Henri-Nannen-School of Journalism in 1989 and then worked for several business magazines. In 1992, he began at Der Spiegel on the German politics desk. Subsequently he served for four years as Spiegel correspondent in Washington, D. C. and New York, reporting on the Clinton years and the development of the internet, being fascinated forever by the digital world.
Mathias Müller von Blumencron was born July 23rd, 1960 in Hamburg, Germany.

Paul Radu
Co-Founder and Co-Executive Director OCCRP
Romania
Paul Radu is a co-founder and co-executive director of the Organized Crime and Corruption Reporting Project, a co-creator of the Investigative Dashboard concept and a co-founder of RISE Project, a platform for investigative reporters and hackers in Romania. He has held a number of fellowships, including the Alfred Friendly Press Fellowship, the Milena Jesenska Press Fellowship, the Rosalyn Carter Fellowship, the Knight International Journalism fellowship as well as a Stanford Knight Journalism Fellowship. He is the recipient of numerous awards including in the Knight International Journalism Award and the Investigative Reporters and Editors Award, the Global Shining Light Award, the Tom Renner Investigative Reporters and Editors Award, the Daniel Pearl Award for Outstanding International Investigative Reporting, the Sigma Award for Data Journalism, an IJ4EU Award, a European Press Prize and others. Paul is an Ashoka Global fellow and a board member with the Global Investigative Journalism Network gijn.org and other organizations. He is also a jury member for the Sigma Data Journalism Awards and other prizes.
Paul was working the Panama Papers, Pandora Papers and the Russian, Azerbaijani and the Troika Laundromat and he coined the term “laundromat” to define TOR-like large scale money laundering operations. He has also published investigative reporting guides and trained hundreds of journalists in advanced follow the money techniques. More here.