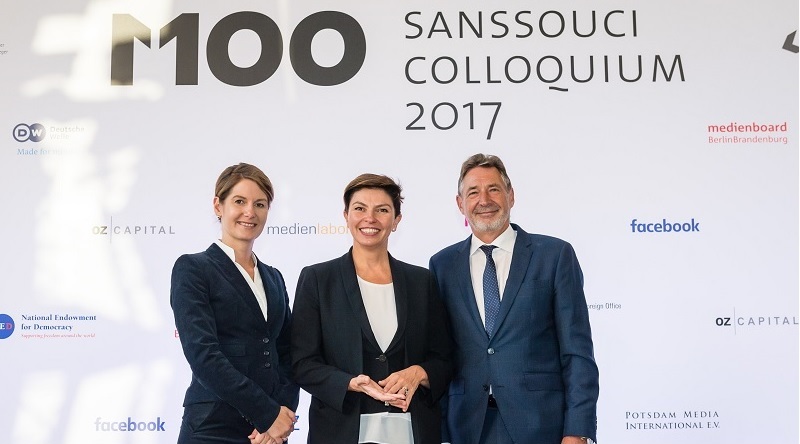 With the ceremonial presentation of the M100 Media Award to the founder and CEO of Doshd TV, Natalia Sindeeva, the international media conference M100 Sanssouci Colloquium in the Orangery of Potsdam successully ended.

After a health-related absence of the federal foreign minister Sigmar Gabriel, the State Secretary Walter J. Lindner gave the political main speech. Natalia Sindeeva, who operates the last independent TV channel of Russia, founded in 2010, set out clearly for freedom of press: „It is important that there are good people, such as our awardee, who always take the risk to get bullied. It is essential that we support these people.”

In contrast to the majority of government-linked media in Russia, Doshd TV (Rain TV) also allows non-pro-government media outlets to express their opinions. In 2011, Doshd TV received international attention when reporting on the protests after the Russian parliamentary elections as the only Russian channel. In the last years Sindeeva and her employees have been increasingly put under pressure. Meanwhile, the channel has been removed from all cable and satellite networks and is only accessible on the internet. Advertising customers bail out under the pressure of the Russian government and the rental contract for the studio has been terminated.

The laudation for Natalia Sindeeva was held by BILD editor-in-chief Tanit Koch, emphasising the role of Doshd TV: „Her channel explains a different Russia in three words: Wild, creative, liberal, intellectual and critical. Doshd TV is its medium.” Tanit Koch adresses Natalia directly after her speech: “Natalia Sindeeva, I highly respect and appreciate your courage.”

Natalia Sindeeva was thankful for the Media Award and called on the attendant European media representatives to live with honesty, courage and openess, but especially to protect human dignity as the most important good for mankind as well as media. To be successful and not to forget what the most important in life dignity is essential for Doshd.“ Moreover, she added: “I would like our work also to be appreciated in Russia.“

Titled „Democracy or Despotism – The Renaissance of Dark Powers“ about 70 participants have discussed at the 13th edition of the M100 Sanssouci Colloquium the consequences of current political developments, the world situation after the first nine months of term of office of Trump and the future of the media and their educational function and role of aiding orientation. The M100 Sanssouci Colloquium has been opened by the repeatedly rewarded Turkish journalist Can Dündar. The former editor-in-chief of the Turkish daily newspaper Cumhuriyet has launched the bilingual journalistic platform Özgürüz in 2017 in cooperation with the research network Correctiv. He warned Europe and the federal government as well as the candidate for chancellor of the SPD Martin Schulz against turning away from Turkey. „Europe should not abandon Turkey.“ The time has come for Europe and especially Germany to distinguish between Turkey and Erdogan. „The other Turkey: this is a country that suffers, is oppressed and still puts up resistance.“ said Dundar in his speech. Find here his complete speech.

The conference has been arranged in three sessions considering different aspects of the main topic as well as the special talk.

Session 1 „The Dawning of a new Age“ considered a new world division between functioning parliamentary democracies and authoritarian governments. Instead of a strong and peaceful collaboration between the member states of the European Union the last ten years of crisis led to increasing success of national movements and increasing disintegration. After the Brexit Referendum and the election of Donald Trump structures that have proven themselves over many decades are questioned.

Session 2 „Failing Democracy“ dealt with the erosion of the approval of democracy and the increasing doubts on political decision-making processes and their concrete results.

Finally, Session 3 titled „The New(s) Media“ broke down the main topic on the role and responsibility of the media. Digitalisation and the increasing significance of social media seem to overstrain everybody. A feature of the current situation is the simultaneity of transparency and confusion through the high number of facts and propaganda.

During the Special Talk head of the Russian editorial section and head of department of Eastern Europe at Deutsche Welle Ingo Mannteufel asked Natalja Sindejewa about her journalistic activities in Russia. „To promote our values is an obligation towards our audience. Honesty and transparency is of particular importance for us. Because our audience are the ones thinking.“

On the topic of “How to finance independent Journalism” in the framework of the M100 Young European Journalists Workshop in the run-up to the Colloquium 15 selected young journalists from Eastern Partnership Countries and Russia dealt with different financing models and possibilities for journalism. The young journalists jointly developed own independent journalistic projects that have been presented on a final Pitch in the Konrad-Adenauer Foundation in front of representatives of various political foundations.

The event was facilitated and supported by the City of Potsdam, Medienboard Berlin-Brandenburg, Federal Foreign Office and the National Endowment for Democracy.