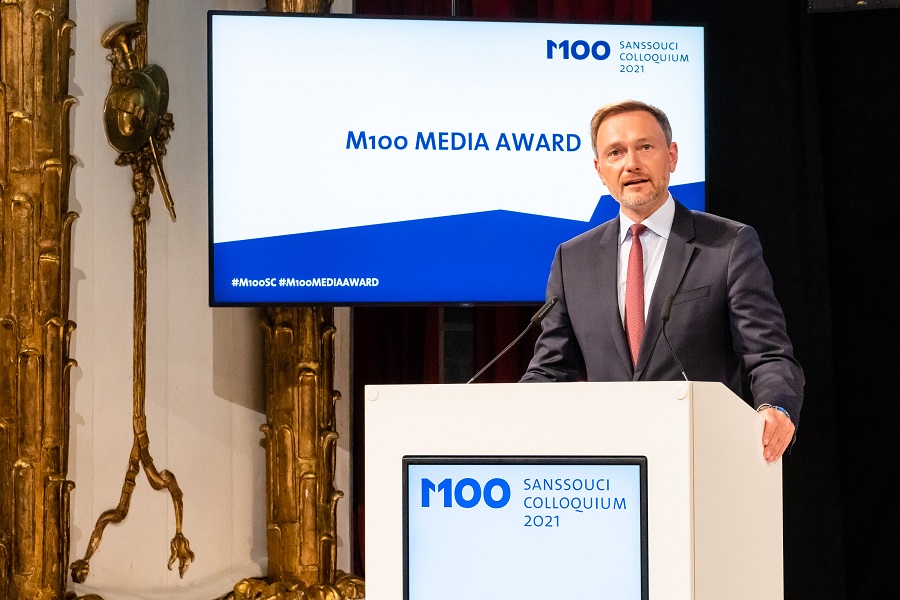 The M100 Media Award is given to personalities who stand up for democracy, European understanding and freedom of opinion and the press. It is a great honour for me to be able to speak for a second time after 2018 on the occasion of an award ceremony. The 2018 laureate Deniz Yücel and the current laureate Alexei Navalny have certainly many things in common. Both are and were in prison for political reasons, one in Turkey, the other in Russia. But it is not this fate that connects them and for which they deserve attention, but it is their democratic action for which they are being honoured.

Before we pay tribute to Alexei Navalny, I must briefly point out that this award ceremony is merely a platform to fund the extremist organisation around Navalny in the insidious plot of the West. Because that’s what I had to read about this event on the news site of a Russian troll factory. And more, I myself also play a role there, because I learned that Alexei Navalny is a lever for me, according to a political scientist, to get into the German Foreign Ministry. And by the way, the colleagues of Bündnis 90/Die Grünen are particularly bad; Navalny is exclusively their means in the ideological fight against the Nord Stream 2 pipeline. I can confess that as far as the leverage into the Foreign Ministry is concerned, even a glance at German quality journalism reveals that we have other plans. But this little anecdote shows how important and indispensable the fight against disinformation is. It might be advisable for international independent quality journalism in the Russian language to receive more public funding in the future.

Unfortunately, as we know, Alexei Navalny cannot accept the prize in person today because he is currently imprisoned east of Moscow. And this is only because he dares to denounce obvious abuses, abuse of power and corruption. He himself, by the way, would say this even more sharply, he would say – and so he did – quote: “I am in detention because I dared to survive an assassination attempt.”

I draw attention to Alexei Navalny’s detention weekly on Twitter, I have a count up, by the way, he has now been in detention for 263 days, a detention that lacks any legal basis, as the European Court of Human Rights has stated.

As liberal democrats, we have a responsibility to each other not to let opposition figures in authoritarian states be forgotten.
Alexei Navalny was already known as an anti-corruption campaigner with his foundation long before 2020, also as a Russian opposition politician, for example as runner-up in the 2013 Moscow civic election. But he became a global symbolic figure for the fight for freedom and democracy on 20 August 2020, when he was poisoned with a nerve agent on a flight from Tomsk to Moscow. He came to Germany, at the urging of his family he was treated here in Berlin at the Charité, and his life was saved. By the way, it was not the first attack on him, we just saw in the video the pictures where he just playfully held his green face into the camera after being attacked with paint in the 2018 election campaign. In that election, not even his name was allowed on the ballot paper.

He regenerated in Germany, I was able to meet him at the end of 2020 together with his wife to exchange ideas. And then in January we learned that he intends to return to Moscow. I remember very well the feelings I had when I heard this news. He knew what to expect. He had to assume with certainty that he would be tried in a trial that could not meet our standards of the rule of law. And yet he chose to do so because he knew that his role and responsibility as an opposition figure would be damaged by the regime’s propaganda if he remained in the West.

What a price this hero in the democratic struggle is willing to pay. In Germany, we sometimes complain about restrictions on freedom. I’m not talking now about the encroachment on fundamental rights due to health protection during the pandemic, but I’m referring to studies according to which Germans think that freedom of expression is restricted in our country. And yes, we too have issues with the plurality of opinions in the published discussion. But how small our complaint about supposedly restricted plurality of opinion seems in the face of repression in an authoritarian regime like Russia. What price is Alexei Navalny willing to pay? Everything, he just said in the short interlude, for the family, for those associated with him, for his organisation. What great respect we have to give him.

While he is currently in prison, new proceedings against him are underway and against the staff of his foundation, which was also classified as extremist in June this year. Foreign political foundations that campaign for democracy and human rights in Russia are also subject to repression. But Alexei Navalny remains courageous. He jokes on Instagram: “Don’t worry, because the life sentence in Russia has a cap of 30 years, so I’ll be free by 2051 at the latest.” Humour can also be a weapon.

Both the poisoning and the imprisonment and the ever-new proceedings against him and his organisation are internationally unacceptable. Public and political pressure must be maintained; a poisoning attack is a breach of civilisation. And perhaps – no, quite certainly – this way of dealing with opposition and criticism is also an expression of the character of rulers themselves. Those who deal with critics and opposition in this way reveal something of their inner strength and their own perceived legitimacy – or even their non-existent inner strength and perceived legitimacy.
In January 2020, I was in Moscow with a delegation, we were on the bridge overlooking the Kremlin, and we stood there at the very spot where Boris Nemtsov was shot in cold blood on 27 February 2015. He, too, was a face of the Russian opposition, previously, by the way, one of the architects of free-market reforms in Russia in the 1990s. Shortly after Alex Navalny was poisoned on 20 August 2020, I met Vladimir Kara-Murza in Berlin, a former advisor to Boris Nemtsov, Kara-Murza was also poisoned twice, in 2015 and 2017. We had an exchange with him: what can be done? What do you expect from us? And he said two things:
Firstly: draw attention to our situation, don’t forget us, support us with publicity. But he gave a second food for thought – and by the way, I had also talked about this with Alexei Navalny in October 2020 – he said that the greatest pressure on an autocratic regime is built up when you establish a sanction mechanism not against the peoples, but against those who are directly responsible for violating human and civil rights. Breaches of international law and corruption should, as Russian opposition members tell us, be punished with personalised sanctions, which do not necessarily always affect the civilian population in broad terms but can also be a reason for those in power to direct their propaganda against democratic communities. I think the so-called Magnitsky legislation is right, not least as a response to the poisoning of Alexei Navalny. We should push such resolutely both in our country and at the European level, i.e. individual sanction mechanisms against the holders of authoritarian regimes that are directly responsible for human rights violations.

In fact, since December 2020, there has also been a Global Human Rights Sanction Regime, which was introduced at the European level. And the first sanctions were then actually imposed in connection with the arrest, prosecution and detention of Alexei Navalny and the suppression of peaceful protests against four Russian individuals.
It can only be a start. We must be tough on illegitimate rule and on venal elites all over the world, but at the same time open our hearts to a population that longs for a good future.

The reveal video on the corruption entanglements and allegations surrounding Vladimir Putin has been viewed by 120 million people on YouTube. Alexei Navalny posted it after his return to Russia. He said: “I am returning to my homeland, which I left involuntarily and in a coma, and I am not afraid. I am not afraid to tell the truth.” And so, together with his team, he continues his work, even under the adverse conditions, and even in exile like Leonid Volkov, who is accepting the award on his behalf today, chief of staff and political director of the team. He is possibly responsible for the biggest project of what we hope will one day be a democratic Russia, namely Smart Voting. Smart Voting has the central idea of bundling the political opposition by agreeing on the most promising opposition candidates in order to strengthen the opposition as a whole.

Ladies and gentlemen, I am convinced that with these and other measures, with courage like Alexei Navalny and his comrades-in-arms have shown, the change of rule, the change of statehood from within is possible. Alexei Navalny himself says: “Fight for your democratic rights and have courage.”

I am convinced the pursuit of freedom is always stronger than power and oppression in the long run. For liberal democracies, democratic opposition should remain a natural partner everywhere in the world, not only in Russia, but we should take the concerns of the people in Hong Kong equally seriously and not take our eyes off the situation in Belarus. We share the basic values of democracy, the rule of law and freedom with this opposition worldwide. Germany and Europe need a foreign policy that wisely combines the interests in dialogue, trade, exchange, and cooperation that we all share with our own indispensable values.

We ourselves can only credibly stand up for and promote the liberal basis of our coexistence in our societies if we adhere to these values even when they might come into tension or even conflict with our other interests.

I therefore congratulate Alexei Navalny on this award, I pay my respect to you, Leonid, and I see your example as a responsibility for all of us to emulate you in your commitment to freedom.

Christian Lindner, born on the 7th of January 1979, is a member of the German parliament (Bundestag) and head of the Free Democratic Party.
(FDP) parliamentary group. Lindner was elected party leader of the Free Democrats in December 2013. After four years of being part of the extra-parliamentary opposition, he led the FDP back into the German Bundestag in the 2017 elections.
Lindner joined the FDP in 1995. He was elected as a member of the federal state parliament in North-Rhine-Westphalia for the first time in 2000. Between 2012 and 2017 Lindner served as parliamentary leader of the FDP group in North-Rhine-Westphalia. Lindner grew up in Wermelskirchen near Cologne. He studied political science, philosophy and public law at the Rheinische Friedrich-Wilhelms-University in Bonn.