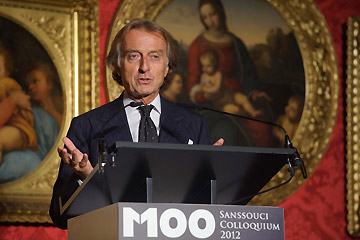 Mario Draghi is one of most authoritative exponents of a   certain kind of Italian and European leading class of excellence: highly competent, with an international culture  and  a strong sense of both institutions and state.

We studied Latin and Greek together at a Catholic school in Rome which gave us a very good education. Mario was an  excellent scholar, very serious and studious, but also a fine  basketball player. Even back then, though, he was preparing for his role as President of the ECB by looking  the part: he was always impeccably dressed in his navy suit  with his hair beautifully combed. Of course, his fellow students – myself included – went out of their way to ensure his hair didn’t stay perfect for long!

Mario graduated with first class honours from the  University of Rome having studied under one of Italy’s most brilliant economists, Professor Caffè, whose thinking has inspired him throughout his professional life. Mario has divided his time between Europe and the US for many years. However, his contact with his young students during his time as Professor of Economics and Monetary Policy at the University of Florence in the 1980s has proved high influential, as he now always gives priority to new generations in both his thinking and his activities.

I’ve always known Mario as a caring and  curious person with a great sense of humour. He also served the Italian State brilliantly in his decade as Director General of the Treasury, during which time he was architect of many major privatisations.

Mario has always managed to be both courageous and cautious at once, and that ability has characterised his conduct in the many prestigious positions he has held in the course of his career. It was with genuine pride – as a friend, an Italian and, most importantly of all, as a European – that I saw that same courage and balance being brought to bear in the first very difficult and vitally important months of Mario’s Presidency. They are also now being put to good work in his robust defence of Europe.

Mario Draghi has stuck with great determination and consistency to his policy of the ECB acting as a protector of the monetary system and stability rather than a rescuer of individual States, and he has done so without framing the issue in ideological terms. He has always been a great supporter of Europe and the Euro, and has taken every opportunity to highlight the advantages of the single currency for us all. He continues to underscore its fundamental value – stability – in the face of anti-European populism in various nations, including, unfortunately, Italy where even the government  of  the recent past were affected.

One of the most important aspects to highlight is that part of the European money market dysfunction (spreads) is not entirely the fault of the individual nations but also the result of a dysfunction of the European system as a whole. The innovative route that sees the ECB as the defender of the system, intervening to eliminate imbalances preventing the latter from functioning, is having a major deterrent effect on the markets.

I would also like to emphasise the importance of defending the integrity of the Eurozone to the greatest possible extent without plan B or C because no one can accurately estimate their consequences or the costs they would involve.

The courageous, well-balanced Mario of today is the same person I’ve known since our schooldays. We could never have imagined as we joked and played sport together that we would one day find ourselves at an evening as wonderful and important as this. Filled not only with a very understandable Italian pride and great mutual affection but also a desire to continue, in our different roles, to forge on with building the great European dream. A dream that can no longer wait.