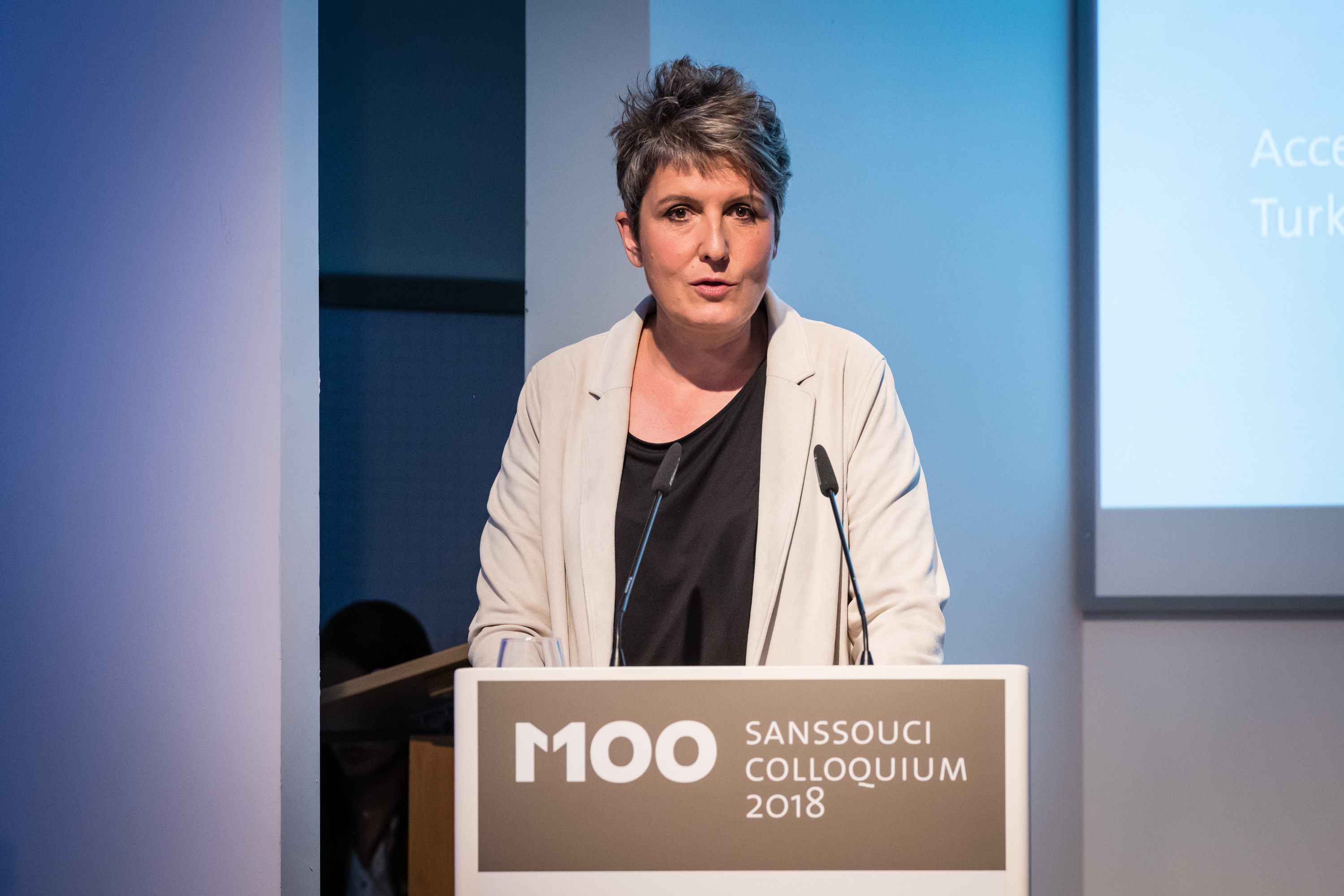 “I think of that time last year. When the cold climbed up the walls of Silivri’s dungeon and at the same time the uncertainty made my body boil. In my television a news line appeared, whose diameter was not larger than a hand’s width. It announced your arrest.”

These are the words of Tunca Ögreten. He works as an editor of the anti-government website “Diken” and spent 323 days in Turkish custody. Ögreten was released in December 2017. In his open letter to Deniz, which he published on the DW website in February, he continues:

“In this hopeless situation, the thought gave me hope that you could be taken to my cell. But they locked you in solitary confinement, showing their human cruelty.”

“But I doubt the effect of solitary confinement. I can see a man in front of me who is getting bigger and bigger in his cell. One who is too big for Silivri. Your attitude not only frightens them, it also encourages your colleagues outside, Deniz.
Once again you prove to us how true the saying “Courage is contagious” is.

I asked Deniz how he had survived the year, the many days, nights, hours and minutes.
“Fighting” was his answer. “I have continued to fight with the means of the journalist, researched, written. When paper was forbidden to him in police custody, he wrote his thoughts and observations on the free spaces in the book “The Little Prince”. When it was clear that he wouldn’t be released after five months, as most expected, he started to revise texts with his long-time girlfriend Doris Akrap in the “taz”, DIE WELT and “Jungle World” to publish them under the almost programmatic book title “Wir sind ja nicht zum Spaß hier” (“We are not here for fun”)

“And were there moments when you regretted not just getting on a boat and leaving, but volunteering for the authorities,” I asked Deniz.

“If you ask yourself that question, you’ll perish.”

Ladies and gentlemen, this evening we are celebrating the presentation of the M100 Media Award to Deniz Yücel, who, according to the jury, reported intrepidly and well-foundedly on the political conditions in Turkey and who is committed to critical and independent journalism even out of prison. The WELT-correspondent is honoured for his courageous work.”

“Courage requires the determination to do or refuse something unpleasant or dangerous after careful consideration. Both can be associated with disadvantages for one’s own person and can require sacrifices.” – Wikipedia knows.
I would like to add an aspect to this entry: To be courageous also means not to be afraid to try oneself out, to develop oneself further, to go new, surprising ways. Just as Deniz Yücel has done time and again in his journalistic life.
To be courageous also means to question one’s own well-being zone, to leave it, to challenge oneself in one’s certainties. So courage can also be the opposite of comfort.

I met Deniz Yücel in autumn 2009, when I was still struggling with the many faces and names as the new editor-in-chief of “taz”. Deniz got stuck in my mind early on because he always looked different, sometimes short, sometimes long hair, in between a bald head, a muzzle, then a full beard. The only reliable feature was a relatively worn black suit with a white shirt.

I never asked you, what the story behind that was, dear Deniz.

As changeable as his appearance was, so reliable was his sharp-tonguedness.
Deniz was rough, boundless and therefore incredibly innovative. There was no “we’ve always done it this way” for him. To accept a “no” seemed almost impossible for him, at least at that time.

Deniz the border crosser. He had no problem sitting on a podium with Tanit Koch at a time when a solid “taz” majority would still have rejected it for ideological reasons.

But above all I experienced Deniz as one: Committed until the pain barrier – regardless of himself. Whether for special projects such as World Cup reporting, special editions such as the “Quotentaz” or the supervision of workshop participants of the “Panterstiftung”: anyone who got involved with Deniz had to be prepared to give everything to get the best possible result. That’s why some people were afraid of Deniz, others admired and loved him, but almost everyone appreciates him. So the roof terrace was bursting and full until the grey hours of the morning at his farewell party at the “taz”. Deniz accepted the fact that he changed sides and went over to Springer, because he saw there the better possibilities to report directly from Turkey. Not later than the brutal police actions during the protests on Taksim Square, it was clear that Deniz had to go out on the street, his vocation was that of the Turkey correspondent. Springer was ok with Deniz, because everyone knew that his employer would have to adapt to his work style, not vice versa.

Ladies and gentlemen, I do not know how you have been doing over the past few days and weeks, Perhaps I have never before discussed with so many people, friends, family and colleagues, what it actually means to do courageous journalism at this time. A prize like the M100 with a prize winner like Deniz Yücel must be a reason to think about it.

With the still fresh impression of Chemnitz and Köthen, it is finally clear that journalism brings more and more physical challenges in addition to intellectual ones. And no longer only in distant countries, on the African or South American continent. In the meantime, we have become frighteningly familiar with the horror statistics of “Reporters Without Borders” from those countries in recurring reports.

But now colleagues in EU countries are also being murdered by suspected contract killers. Journalists are harassed, beaten and insulted everywhere – even in the middle of Germany. Journalism has never been a particularly distinguished profession. But now it is becoming a dangerous profession – and that also in the heart of Europe. Deniz Yücel also stands for that. He has made an experience that is a megatrend of our time.

The question: What is courageous journalism today? It becomes a very concrete, a very personal one. Do I still holdd my ground, can I still stand it? A question that we all have to ask ourselves.

Meedia wrote about it:
“While in Chemnitz the brown mob yelled “The system is at its end, we are the turning point”, the AfD faction in the Hochtaunuskreis publicly pondered on Facebook that in a “revolution” broadcasting houses and press publishers would be stormed and employees “dragged onto the streets”. The “media representatives” should think about it, “because if the mood would finally tip over, it would be too late”.

We really have to think about that. And face up to the fact that the journalists who go out of their parlours and deal with people who supposedly don’t get a hearing are particularly harassed. A theoretical paradox that can become a real threat to the lives of local reporters.

The debate the German Bundestag immediately after Deniz Yücel’s release therefore deserves our special attention. Because, on the one hand, it proves how anti-democratic the AFD faction would restrict the rights of freedom of the press if they had the corresponding majority. But also because this Bundestag debate is a particularly encouraging example. For a long time now, the German Parliament has not discussed freedom of the press as passionately as it did on this day.

With 77 to 552 delegates the proposal of the AFD was rejected, in the end also a success of Deniz. And an admonition to the delegates: Please stick to the clear attitude that politics must not restrict freedom of expression, even if the published views are not shared.

Democracies need a free, independent press that keeps an eye on the powerful. If we look around, we see that this cornerstone of free societies is threatened even in countries where we never thought it possible. That is why all democratic forces must join. This does not mean that we should give up the critical distance. On the contrary, the separation between politics and journalism must become clearer so as not to further damage the declining credibility.
However, it is also true that we, the media, should treat each other and the subjects of our reports with respect across our companies and financing models. In the end, to serve the great common goal of preserving the social significance of our industry through outstanding work and courageous journalism. Enlightenment instead of rushing, research instead of polarization, listening instead of writing down.

Even though this is becoming more and more difficult and dangerous.

Dear Deniz, next to my coffee machine there is an original “taz” title page in a silver-grey frame. It was your idea, and you gave everything so that we could get the copyrights, and you literally made sure at the very last minute that the barcode at the bottom right was made unrecognisable, so that even at the kiosk nothing went wrong. Your perfectionism.

It’s the title of the first issue of “Charlie Hebdo” after the attack on the satire magazine. I remember exactly how much you were touched by the tear that runs down the cheek of the Prophet. “Je suis Charlie” is written on the note he holds in his hand.

This title is a tribute to those colleagues who lost their lives fighting for freedom of expression.
For me, however, it is also a valuable memory of the many good hours in which I was able to do important journalism with the courageous journalist Deniz Yücel. In this sense, this site is a morning encourager.