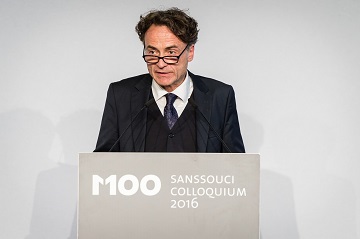 I’d like to tell you a little story this evening. A story about what it means to be Roberto Saviano. It is a bit sad, but it has a happy ending, which I’ll save for the end of this speech – I’ll let on that much.

The story goes like this: It was Tuscany in the summer of last year, and I had arranged to meet Roberto on a particularly bright day. We met at my favourite restaurant right on the beach, which has the best spaghetti vongole in the world, just to grab some lunch.

Now, you need to know that an appointment with Roberto Saviano takes quite a bit of preparation. Because he never comes alone. You might have already noticed that we are well guarded here this evening – and for once that is not only due to Angela Merkel.

That’s how it was on this summer day in Maremma as well: Extra privacy screens were set up in the little restaurant; Roberto Saviano’s bodyguards were sitting just a few tables away; they had given the hostess special instructions. Now, it is certainly well known that Roberto is under personal protection because of death threats by the Mafia – so these precautions didn’t surprise me.

What startled me, what saddened me, was Roberto’s answer to a question I asked him at that lunch. Why doesn’t he go for a swim since he’s already here? The sea was just a few meters from our table. But Roberto shook his head. No, he said. That wasn’t possible. “I can’t go swimming.” “But listen,” I said, “you could take a quick jump in the water right now and not a single Mafioso in the world would know about it!” But it wasn’t the Mafia Roberto was worried about. He told me he was afraid of something else altogether: “If I go swimming now, then all someone has to do is snap a photo of me splashing around in the water, and tomorrow the newspapers will say: “Anti-Mafia hero, whose bodyguards are paid by the State, is having a great time.”

By the way, Roberto Saviano doesn’t drive to the city for ice cream anymore, for the same reason. The last time he did that, a newspaper mentioned it right away, with a giddy undertone, as if someone had caught the author stealing.

As if it weren’t horrible enough that it’s been ten years since Roberto Saviano was able to take a step without his watchful companions – ever since the publication of his book Gomorrah about the Neapolitan Mafia, in which he had the courage to call the bosses by their real names. Now he’s paying for it with a life in the shadows. In the middle of Europe!

But the fact that, to make matters even worse, Roberto Saviano is still completely vulnerable to other kinds of attacks in his own country, and some politicians and other celebrities, including some journalists, use and treat him as a veritable enemy – that, ladies and gentlemen, I find intolerable.

Even recently, an Italian senator claimed that Roberto Saviano did not need police protection, that not a single member of the Camorra wanted to kill him, and by the way the book made him rich. There’s the mayor who accused him of only seeing the problems and making them worse. Another notorious Prime Minister accused him of advertising the Italian Mafia. I’ll spare you the details now because this is supposed to be a laudation speech.

But Italy is a country where the tone of public debate has been very crude for a very long time, as will hopefully never be the case here in Germany.

What I am saying here is not that no one should ever be permitted to criticise Roberto Saviano and his books and his articles – of course that has to be allowed. On the contrary, stylising him as a hero that never makes mistakes would be completely wrong and certainly not what he had in mind.

What I am saying is that Roberto Saviano depends on support from the same society whose eyes he has repeatedly opened with his work – it’s just that some would rather close their eyes again, turn away and know nothing about these things.

Ladies and gentlemen, perhaps I should take this opportunity to say that when it comes to Roberto Saviano, I am biased in many respects. He is not only a friend, he also writes for DIE ZEIT, and right now we are working together on a feature story about the endlessly great enigma that is Italy, which may turn into a book. But that is not the reason I’m giving this speech. I am here because an evening like this helps make Roberto Saviano a little bit safer in his home country.

What he is experiencing here in Potsdam is a great sign of solidarity – through the presence of all of you and by awarding this prize, the M100 Media Award. It is also especially nice that the Chancellor is here today and has honoured him in her speech. This alone – I am sure – will be an incredible help to Roberto Saviano.

“There will be situations,” Roberto once said, “where I will become more vulnerable because fewer people are paying attention to me.” To him, public attention is not just a decorative accessory or flattering gesture. It is a kind of life insurance.

Nevertheless, this evening is not about honouring the person at risk, but rather his work: the work of what might be the best-known writer in Italy right now!

You have to realise: Roberto Saviano told his impressive stories of what for us seem like strange planets – which is to say wherever Camorra was out making trouble – not with the cool distance of a reporter who travelled there and stayed only as long as necessary, but with the lifeblood of a young man pursuing the suffering and misery of his homeland.

Roberto Saviano grew up in the sump he describes in Gomorrah. He spent part of his childhood in Casal di Principe, a Camorra stronghold. He heard the shootings on the street, saw the bodies with his own eyes and knew the bosses’ children from school.

He himself admits that the abysses that opened up for him back then also fascinated him – the uncompromising way that the clans exercised their power, the mythical willingness of members to put their lives at risk. But he chose a different path: After studying philosophy in Naples – he wasn’t even 30 years old back then – he wrote this book about the battlefield in his hometown that would become an international bestseller. Everything he had absorbed like a sponge in newspapers, court cases and his own research just had to get out into the world.

This may explain why much of what he writes is so direct, why some of the lines resonate with so much anger. You hear it, for example, in a passage from Gomorrah, which I want to quote here because it can also be understood as a sort of credo, as a description of what keeps Roberto Saviano tilting at windmills:

“I was born in the land of the Camorra,” Saviano writes, “in the territory with the most homicides of Europe, where savagery is interwoven with commerce, where nothing has value except what generates power.” In this world, Saviano writes, fighting the clans is more than just a moral duty – it’s an obligation “if you want to consider yourself worthy of breathing.” Here, the anti-Mafia struggle becomes a fight for survival, a prerequisite for any existence worthy of the word “life”.

In other words: Roberto Saviano can’t do any different. And that is precisely what makes his work so powerful.

Again and again, he interferes in the events of the day, publishes brilliant essays and columns that shake up Italy. He never just writes what someone wants to hear, he never shrinks from anyone. That is the real task of intellectuals in a free, democratic society: to put a question mark in places where everyone else indulges – with wondrous unity – in conformism. I know there are more comfortable positions.

Roberto Saviano’s voice also grabs attention by the fact that he is a fantastic storyteller: one who fully recognises that even a little story can hold a big truth.

In Zero Zero Zero, for example, his book on international drug trafficking published three years ago, there is a scene that you will probably never forget once you’ve read it. Saviano prints a transcript of a speech that an American policeman leaked to him. An Italian Mafia boss supposedly gave this speech in front of big and small-time criminals from all over the world; it is a kind of lesson on the philosophy of criminal thinking. This presentation has to do with the difference between the law and rules: Laws, this Mafiosi says, are something for cowards. Anyone who wants to have a say in this world has to follow rules that break the law – the rules of organised crime.

Roberto Saviano not only explains the rules of the Mafia, which have validity far beyond the clan. He also describes how organised crime is propagated in Germany; he feels the problem is underestimated here. He tells us in no uncertain terms that we are fooling ourselves if we think that we don’t know anyone who takes cocaine. Again and again, he shows us that the world of organised crime has more to do with all of us, affects all of us much more than we realise or want to believe.

Going back to our friendship: What always impressed me very much about you, dear Roberto, what frankly makes me speechless sometimes, is the fact that – despite all the serious problems that you describe – you are not a moralist, and more than anything, you are not a cynic. There is nothing worse than when moralists and cynics try to explain the world – or even control it.

Even if you sometimes say that in retrospect, you regret having written Gomorrah – and who wouldn’t be able to understand that, given the way you have been forced to live since then? – in my eyes, you’re still an incorrigible Utopian. Someone who never stops believing that we can make the world a better place if we only want to.

At the beginning, I promised you a happy ending to the story about my lunch with Roberto Saviano by the sea.

What happened was this: A year ago, as we were both eating spaghetti at the beach restaurant, a young woman approached our table with a baby in her arms. She had spotted us and recognised Roberto immediately, her eyes shining. She did not want to bother us, just say something very quickly, she said. Turning to Roberto, she continued: “I just want to say ‘Thank you’. You always give me courage.”

Let us turn the tables again tonight, and give Roberto Saviano courage! Let’s show him and everyone who risks life and limb to tell unpleasant truths that their work is not for nothing.

And in this sense, I can only join the young woman from the beach in saying: Grazie, Roberto!