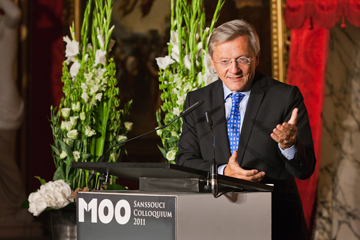 It isn’t exactly self-evident that a former Austrian Chancellor should give a speech honouring George Weidenfeld, who was after all driven from his homeland and mine in 1938. And if it is true that childhood and youth really do shape a person, then it stands to reason that a grumpy, bitter and lonely gentleman must sit amongst us, due to all he experienced during this time. But when you look at him, you see that the opposite is true. He has remained inquisitive, astute, courageous, and pugnacious and he is certainly not lonely. Not only is he surrounded by women but also by admirers, both young and old, like me and many others who have gathered here today.
He is actually a physical miracle anyway. He is one of these remarkable older statesmen, such as Helmut Schmidt and Henry Kissinger, who never seem to age.

The psalmist has long been mocked for saying that our lifespan is only 70 or 80 at the most. And if it was enjoyable then it would have been only with pain and labour. Nothing of this can be seen in him. He is tireless, someone who has stayed young, even at a great age.

Back to his childhood. He was born in Vienna in 1920 as young Arthur Weidenfeld. And you have to imagine the Vienna of this time: At that time, 1920, it had fallen from its Imperial heights. Overflowing with refugees from the former Habsburg monarchy, buzzing with emotions, visions and half-baked ideas. Many refugees flooded into Vienna from far and wide, with no idea of how things would actually progress from there. Arthur Weidenfeld’s father was a liberal Jew from Tschernowitz, one kilometre from today’s Hungarian/Romanian border. His mother was from a noble family, from which had come the highest-ranking rabbi and which was very strongly rooted in its traditions. Arthur Weidenfeld was born into this family and experienced everything that happened in this turmoil, this maelstrom of the first Republic in Austria.

I could expand on some incredible parallels: Austria was bankrupt and at that time we were forced to accept a loan from the League of Nations. This resulted in a General Commissioner (the then mayor of Rotterdam) being posted to Vienna. He had to countersign every single item of expenditure. So much for the subject of sovereignty, and any comparison with today is prohibited of course, but this child witnessed everything at that time: The burning of the Palace of Justice in 1927 following demonstrations by tens of thousands of people, who were beaten by the police, the mass unemployment of 1929, he experienced how the democracy was shut down by Dollfuß, he experienced the increasing strength of the Nazis and the way in which they threatened the corporate state, which had relied on Mussolini. He experienced Hitler’s invasion of Austria in 1938, one day before the referendum on the actual independence of Austria should have taken place. I mention this because it explains why the young Weidenfeld was sharpening his sense of observation by this time. You had to pay close attention to the way in which events unfolded around you. For example, recognising the political direction of greetings. (…)

Naturally, identity became a crucial issue at this time. Whoever loses their homeland spends their entire lifetime searching for their identity. And in Georg Weidenfeld you can recognise many identities. There is actually a bestseller “Who am I? And if so how many?”. And to some extent, of course, this is also defined by language. He is fluent in several languages: German, English, Italian, French and, as a classical scholar, Latin and Greek. (…) And these identities led to the young Weidenfeld joining the Association of Socialist Secondary School Students at a relatively early age, followed by a Zionist student body and then later a student association called UNITAS. They were fencing associations. Who would have thought that in 1938 George Weidenfeld fenced with the Nazi students? He has always been someone who dared to do these things.

He then came to the BBC where he spent eight hours a day listening to enemy radio broadcasts. But, of course, he was soon promoted, having his own shows and being able to make his own commentary. At the same time, he was also having his articles published in a number of newspapers. He then moved to the legendary address, 200 Oxford Street, headquarters of the BBC, where he was able to establish ties with the exiled governments. That is also where his association with Israel began. From an early age, he had been open-minded towards Zionist thinking. And in England, he was also acquainted with Marks & Spencer, at that time the headquarters for the support of a Jewish state, and where in 1947 he first met Chaim Weitzman. It was there, on 15 May 1948, that he witnessed the birth of the new state of Israel. And, of course, this was immediately followed by the backlash from the Arabs who wanted to cast the Jews into the sea. This guiding theme, to take care of the state of Israel even in difficult times, was not always popular in the British Parliament, and neither was it always popular to say the right thing, because in Israel it was sometimes understood quite differently even though it was well meant. (…)

When he became a member of the House of Lords and was raised to the peerage, he selected as his motto: “Weapons yield to understanding”. This is a classic gift he has. Always willing to negotiate, he has however always placed the greatest importance on values, on principles.

I would like to briefly retrace one of the important lines: Reconciliation. The reconciliation between Germany and Israel, for example, was of great concern to him. When Helmut Kohl gave his great speech in 1989, which did not go down at all well in the UK, Weidenfeld was the one who wrote a glowing piece in the Times supporting Kohl and in favour of the reunification. This earned him an invitation to the residence of the Chancellor in Bonn, and it is there that Jewish/German dialogue was born, conducted by Horst Teltschik and which has remained very important until today. Weidenfeld then sent a report to Israel und was permitted to speak about the subject at the Conference of Ambassadors, and it is a particularly important area for which we owe him thanks.

Of equal importance was the reconciliation between the Catholic Church and Judaism. The Vatican had no exchange of ambassadors with Israel, and Weidenfeld always campaigned for this dialogue, although he always had a very ambivalent relationship to the Catholic Church. (…) He was one of only a few laypeople who had the opportunity to hold discussions with John Paul II in Castel Gandolfo. [The Pope] always gathered together the top people in their fields, theologians, and philosophers, to ensure he remained in touch with current thinking.

There is another topic, which for him – and particularly for me – is very important: He has always believed in Europe. That is, a greater Europe. (…) For him, Europe has always been a beacon of freedom. A beacon which enables people to feel that this dream of peace for the brave, a secure life with a competitive economy and a functioning social welfare system can be achieved. That is not self-evident, and Europe is far from perfect. But it is something which is important and which must be said. And Europe is, I believe, still a good story and Europe also needs good storytellers. George Weidenfeld is one such man.

So what can we ultimately learn from him? He is a peculiar man, out of step with our time. I have never seen him with a computer or using a mobile phone. He himself says that he has never sent an e-mail, but he knows more than many librarians. He can’t drive a car but he understands relationships and is perhaps more informed than even the Secret Service or the CIA. It is incredible from where this man obtains his sources of strength as well as his sources of information. He is someone who loves books and newspapers, but abhors the depths to which tabloid journalism sinks. Even at a media conference, at M100, it is very important that, as with good and bad politics, the battle over the dividing line also plays out between the media. Between good, responsible, objectively committed, honest journalism and the kind of reporting which involves hounding people and imposing conditions, falling short of minimum standards and only caring about the number of copies sold. That is an important point on which we can learn from him. Like an elephant, he never forgets anything, but it is a fair, objectively conscientious judgement that is then elicited from him and which then also hits home.

For many of us, he is also a role model. It was once written that the ‘trust deficit’ is far more dangerous than the ‘budget deficit’ that currently exists in many countries. That is important, because the ligature of our democracy and modern societies is indeed trust. If that is undermined, there is little left to bind, to maintain, to strengthen and bond. He is someone who earns trust and who radiates trust. (…) He has remained inquisitive, and I truly believe that a yearning for something new and to explore what is worth preserving from the new is something which we can and should learn from him: ‘Think Big’, thinking of greater relationships, that Europe should not stop at its borders, but should commit itself to and be interested in politics on a global scale, and an unbroken optimism.

His optimism is subtle, realistic and careful; it is not naïve optimism. He always has faith in young people. That is something that has always appealed to me, and in this sense I also think it is great that he has faith in the young people involved in the Arab Spring. At the same time, however, he also has a few warnings to offer along the way, which he has published in Die Welt and other newspapers. They are like small, precious works of art, scintillatingly written, which I always read with great pleasure, and I am not alone in doing so.
Our warmest congratulations, dear George.