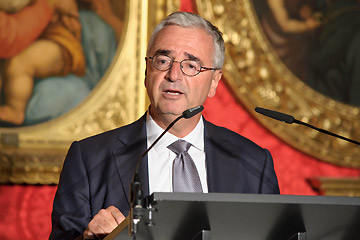 It is customary, on these occasions, to summarise the biography of the person we are honouring. That’s not my intention this evening. Mario Draghi’s outstanding career is well-known to all of you. (And while I once heard Henry Kissinger introduced with the words that “nobody in the world needs an introduction less than Henry Kissinger – but nobody in the world enjoys his own introduction as much as Henry Kissinger” – Mario is not yet at that stage.) Instead, I would like to offer you my personal view on Mario Draghi.

In fact let me offer you a prediction:
History books will say of him – “he was the right man at the right time in the right job”.
Yes, history books – because we live in a truly historic time. A period that will be judged as one of those crucial times in our political development that in hindsight is seen as historic.
The man that we honour tonight plays a crucial role in crucial times.
So let’s take a step back, and look at where we stand today.
• Some of you know that I like to talk about a world ‘BC’ and ‘AD’. BC, or ‘Before Crisis’; AD, or After Deleveraging…
• And then, there is the present. Let’s not fool ourselves; we are not yet in the post-crisis period. We cannot talk about ‘AD’ yet, because a lot of deleveraging lies ahead of us.
• But we are, now at a critical stage. We are shaping and defining the post-crisis era. Decisions we take now will influence the development of Europe, and Europe’s place in a changing world, for the next generation. The actions, and the character, of a small number of political leaders, such as Mario Draghi or Minister Schäuble, will be decisive. So will be the support they get from opinion leaders such as you here tonight.

“BC” was an era of accommodative monetary policy, cheap capital (too cheap capital in hindsight), exceptionally benign markets, and growing prosperity. In the two decades before the crisis, it appeared to be very low risk.
We all know how it ended:
• Many Americans chasing the American Dream and ending with unaffordable housing.
• Many investors chasing the quick returns and ending up with products whose risks they did not understand.
• Many small savers chasing the highest interest rate and ending up with Icelandic Bank accounts.
• Some corporate and municipal treasurers chasing the smart deal and ending up “out of the money”.
• Some European governments chasing social utopia or simply the easy way and ending with unsustainable debt….
• and of course many in the financial sector chasing near-term rewards for themselves and ending up – with near-term rewards for themselves …

And the result? The most intense financial crisis of the post-war era.
But what we tend to forget is – the ‘Before Crisis’ era brought benefits too:
• One of these was globalisation. International trade tripled in the first ten years of this century. Foreign direct investment increased significantly. As barriers to free commerce fell, prosperity rose among developing nations. One and a quarter billion people – one-sixth of our planet – was lifted out of poverty.

Of course, we must recognise that globalisation has not benefited everybody. But overall, I would argue that its effects have been overwhelmingly positive.
• And the time of easy credit, and ready investment, also helped rebuild the economies of Eastern Europe, after the collapse of the Soviet Union.
• And not to forget, the reconstruction of Eastern Germany, post-reunification, could also be financed on reasonable terms thanks to access to international capital markets.
• Often overlooked is the critical function capital markets and modern financial instruments play for insurance companies and pension funds in the context of old age provision.

In other words: stable, expanding capital markets, and a benign credit environment, were also a force for good. They transformed savings into capital, which financed economic activity at a reasonable cost, faster than ever before – and on a much bigger scale than the balance sheets of banks ever could have done.
And Ladies and Gentlemen, it is crucial that we see both sides of the ‘Before Crisis’ era, when we take the vital decisions which will shape the future. Because in fact, history teaches us that there are two different types of financial crisis:
• We have seen crises which caused only losses, hardship, misery and anger. For example, Tulipmania in Holland; the Louisiana Land Boom; the South Sea Bubble;
• But other crises were different. They certainly caused losses for investors and personal hardships; but they also left behind very important, positive legacies. The American Railroad craze hurt its original investors; but it left behind a transport network which connected a vast continent with vital infrastructure. The Internet Boom or ’dotcom bubble’, also left investors with heavy losses; but today, we have 600,000 miles of cables which connect the world as never before, and which have revolutionised the world we live in.

When we reform, it’s important to decide which of these two types of crisis we have just seen. You cannot take the ‘right’ path of reform, unless you really understand the underlying crisis:
As we clean up after the credit crisis, the risk is that we throw the baby out with the (admittedly, dirty) bathwater.
Let me point you toward two clear examples of this type of thinking:
• First: a regressive instinct toward national fragmentation. In some European countries there are constituencies who either want to reverse the path of European integration, or conciously risk doing so by accident;

Second: the tendency to push the pendulum too far in the opposite direction. If we over-restrict the functioning of banks and capital markets, we undermine the ability to commit capital to economic activity at a reasonable cost – in other words, we cut off the ‘oxygen’ of recovery! “Too big to fail” sounds convincing but only makes sense if somebody defines authoritively what’s 5
“small enough to fail” – IKB, Northern Rock and individual “cajas” apparently were not …
I know, I know – not a popular thing to say or at least something that sounds very defensive coming from somebody from Deutsche Bank, formerly of Allianz and Goldman Sachs. But just because it’s against the “Zeitgeist” does not make it less right.
And this is what makes Mario Draghi’s – and of course other critical decision makers like Minister Schäuble’s – tasks so extraordinarily difficult.
Besides the fact that there is no established institutional framework for the management of this transformation the crisis plays out against the influence of the three fundamental trends already mentioned:
• First the rebalancing of the global economy with the rise of Asia – enough said about that except that this of course continues to create massive additional capital demand.

• Second: Deleveraging – in other words the reduction of excessive debt financing which is crucial but of course reduces the supply of capital. The two together simply mean that the cost of capital in a world AD will go up – regardless of current short term funding costs.

• And third: the “Zeitgeist” – call it the “prevailing public sentiment” which in the post-bubble time can be as restrictive as it was offensive BC. Today the “Zeitgeist” is against moderation and innovative solutions – it calls for retribution and orthodoxy and where no “orthodoxy” exists – for simplistic solutions, like reverting to the Glass-Stegall Act of the 1930’s..

Sometimes it seems that people forget that it took tougher regulations, heightened awareness and changed behavior to successfully address environmental problems – not an undoing of the Industrial Revolution…
All quite understandable given the actual as well as the perceived misconduct of those who are seen as unfair beneficiaries of past proliferacy – be they citizens of Greece or the City of London.

But isn’t the really critical question this: do they get it or don’t they? Do they – thoses citizens of Greece or the City of London – understand that the world AD will be fundamentally different than the world BC?
If they do – really do – then they need time – we all need time – to clear up the mess. You cannot undo 30 some years of misallocation of capital in 3 years.
The principles are the same as in a corporate restructuring: pick a credible management team, agree on a turnaround plan, provide financing that allows management to implement that plan – and monitor, monitor, monitor …
But when you monitor – monitor correctly and fairly. Cleaning up mistakes and failures of the BC era now and therefore drawing attention to them now should not lead sophisticated journalists to the wrong conclusion that “they have not learned anything”.

All of this adds up to one overwhelming conclusion: at the helm of the world’s second-most important currency, at the center of Europe’s monetary system it’s crucial we have the right reformer! One who understands the context and has the guts to stand up to the “Zeitgeist”.
Because we should be under no illusions: if Europe fragments, single European countries cannot go it alone against the economic might of the USA or China. As an Austrian, I can tell you: there’s no mean reversion in the importance of nation states.
A stable common currency, and a well-functioning banking system and capital markets, are critical if Europe is to regain the competitiveness which is central to future prosperity and growth.
The task facing European leaders is neither easy, nor quick, nor cheap. The journey will be tough. From our leaders, we require exceptional intelligence, courage, vision, energy and tenacity. And they need our support.

Now is when we shape the post-crisis order – the ‘AD’ era. We need not merely reformers, but the right reformers – reformers who not merely react to the last crisis, but anticipate the needs of Europe in the next phase of our history. Reformers who are pragmatic, but responsible; who focus on immediate priorities, but take a longer-term perspective; who are experienced, but who challenge conventional thinking.

And that is the character of the man whom we honour this evening.
Ladies and Gentlemen, let me conclude as I began. I have not given you Mario Draghi’s CV… but I have given you, from my perspective, Mario Draghi!

Now I’ll hand over to Luca di Montezemolo who knows Mario since boyhood – I am sure he also has something to say that’s not on the CV ….