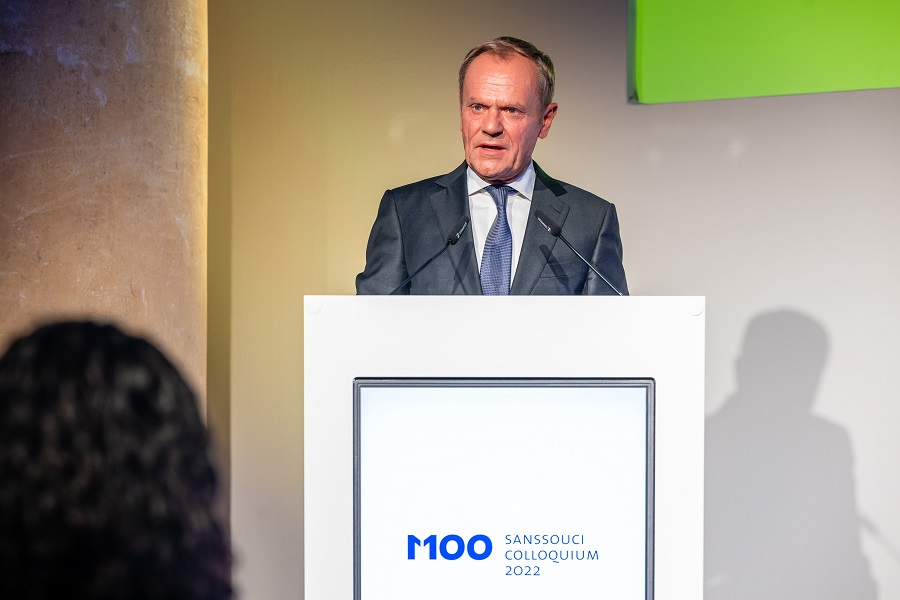 It is with great satisfaction that I have accepted Wladimir Klitschko’s proposal to give a laudatory speech for the Ukrainian nation honoured by the hosts of today’s ceremony.

As a Pole, as a friend and ally of Ukraine from the first days of its independence, as a committed European and man of the West, the West in the sense of political values, I have a duty and a right to speak today with force and unambiguously about the heroic fight of Ukraine, about Russia’s crimes committed every single day of this war, about the stance of Europe, and about the meaning of this war for the future of us all, from Kyiv to Lisbon. For our freedom and security.

It is high time to understand – that this is also our war which is about the foundations of our civilisation. Ukraine’s victory will mean not only that it maintains its independence and territorial integrity. It is becoming increasingly clear that Ukraine’s victory is a condition for the survival of European community and political civilisation of the West. A potential victory of Russia would mean genocide on Ukraine’s territory, a threat of subordinating Europe and a decline of its geopolitical significance. Putin’s triumph would also mean a strengthening of authoritarian, or even fascist trends around the world, and especially on our continent.

As Timothy Snyder noted: “This war will establish principles of politics and geopolitics for the twenty-first century and may decide about the fate of democracy as such.” Today, we are paying tribute to heroic Ukraine, not only deeply moved by its suffering and courage, but also fully aware of the stakes this war holds for all of us. They are so high that we must discuss our role in this historic confrontation with complete honesty. Ukraine, as recent days have proved, has a chance to win this war, but it needs a decidedly greater support from the side of Europe, in particular from the side of the biggest and richest states like Germany.

And we are not talking here about symbolic support, awards and distinctions, but about weapons, ammunition, planes and tanks. There is no, absolutely no reason that Germany, France or Italy be less engaged in helping Ukraine than the US, Poland or the Baltic states. Putin has attacked Ukraine, but in fact this is an attack on the whole international community. Only the political blind men can today be denying the fact that Russia, by different means, has been waging war against NATO and the European Union for a long time now. Weakening of the North Atlantic Alliance, interfering in elections and social conflicts in EU states and the USA, involvement in Brexit – these are all examples of Russian political sabotage on a great scale. Breaking up of EU’s unity is one of Kremlin’s obvious priorities. Therefore we have no alternative but to univocally engage ourselves on the side of Ukraine.

In a moral dimension the situation is even more clear. There hasn’t been in a long time such a black and white conflict, where the boundary between good and evil is so sharply delineated. It is evident who the victim is and who the executioner. And any attempts to relativise this issue seem to me, bluntly speaking, disgusting. European politicians, also here in Berlin, who are looking for some kind of symmetry, for some historical and economic justifications for their inaction or neutrality, should be aware that if the assistance from their countries, especially when it comes to weapons, was quicker and greater, fewer children would have been killed in Ukraine, fewer women raped and murdered, fewer towns, hospitals and kindergartens bombarded.

When I hear today the words that Europe and Germany should have listened to Poland or Estonia about Kremlin’s aggressive politics already many years ago, I feel, unfortunately, bitter satisfaction. Yes, we were right when we urged you back in 2008, when I was Prime Minister of the Polish government, to agree for Ukraine to join NATO. We were right when we were warning against the catastrophic geopolitical consequences of Nord Stream II, or when I tried in 2014 to bring the Germans, the French and Italians round to the idea of the Energy Union and Europe’s independence from Russia’s gas dictate.

We cannot turn back time, so let’s do whatever can be done and let’s do it now. These are:

– an immediate increase in weapons’ deliveries, including heavy weapons, to Ukraine.
– political guarantees for Ukraine’s full membership in the EU, as quickly as possible, right after the end of the war.
– a return to the question of Ukraine’s membership in NATO and real security guarantees for Kyiv.
– maintaining EU and NATO’s full unity in their tough sanctions’ policy vis-à-vis Russia.

There have been voices coming recently from Berlin that Germans cannot openly side with Ukraine because of the memory of Russian victims from the time of World War II. When in fact the war began with an attack of Germany and Stalinist Russia on Poland and the greatest sacrifice in that war was made by the Jews, as well as by the Polish, Ukrainian and Belorussian nations.

If the feelings of guilt and responsibility for the Second World War should oblige Germans to anything today, it should be first and foremost a univocal and full engagement on the side of Ukraine’s fight against the aggressor. And a serious and honest stance regarding compensation for damages for the nations that paid the highest price for the folly of Nazism.

I say these words as a politician who has been engaged in the process of Polish-German conciliation and in the building of a common Europe for many years, not as an enemy.

All the arguments – moral, political, historical and civilisational, bid us to stand today on the side of Ukraine and its heroic defenders. I am proud of my compatriots who have demonstrated to the whole world how to behave in the face of such a historic challenge.

All the people of goodwill are saying today : Slava Ukraini!