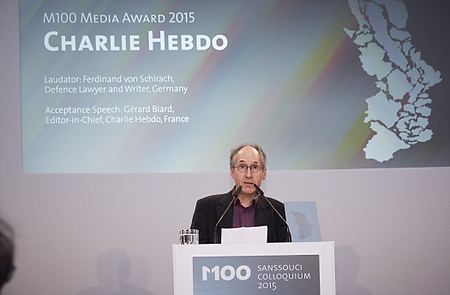 Biard is well aware of the enormous risks involved in publishing material that some consider problematic. On 7 January 2015, in a terrorist attack on the editorial office of Charlie Hebdo in Paris, 12 people, including eight Charlie Hebdo staff including editor Stéphane Charbonnier, were murdered by two Islamist-motivated perpetrators. In September, Gérard Biard accepted the M100 Media Award on behalf of the editorial team in the presence of the then Foreign Minister Frank-Walter Steinmeier.

Asked about the Russian invasion of Ukraine, he says the main problem with Putin is that he has managed to prevent any criticism in Russian society.
With the proliferation of social media, Biard says the risks have increased, making everyone –  not just journalists and activists – a potential target. “Of course we stand with the Ukrainian people,” Biard says. “The biggest fear about the war is that it will degenerate into a Third World War. But I think a Third World War has already started; it’s a war between countries with democratic values and democratic systems and institutions on one side and those that don’t have them on the other.”

Vazha Tavberidze is former editor-in-chief of Georgia Today and a regular participant in the M100 Sanssouci Colloquium. The full interview is available (in English) here.