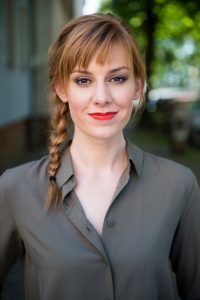 Eva Schulz (28) is a reporter and presenter. She particularly enjoys experimenting with social media and apps and trying out how to use Twitter, Snapchat and co. tell stories and impart knowledge. Eva is the front woman of “Deutschland3000”, a Facebook format by funk, which looks at political topics from the perspective of Millenials. Prior to this, she helped design the “Hochkant” snapchat channel for funk, on which up-to-the-minute news for young users is prepared.

Schulz wrote columns for Jetzt.de and Zeit Campus, helped develop the first German edition of Wired and was a reporter for the young TV magazine “Klub Konkret” (EinsPlus / ARD). She then spent six months as a Trialogue of Cultures Fellow in Jerusalem and Tel Aviv. Recently, she was named Entertainment Journalist of the Year 2017 by Medium Magazine.

She studied communication, culture and economics at Zeppelin University and wrote her thesis on innovation prevention on public television (tl;dr: It’s a mess.). After a research stay as a Media Fellow at Duke University in Durham, North Carolina, she studied a Master program in Urban Studies and travelled through Europe for two semesters.