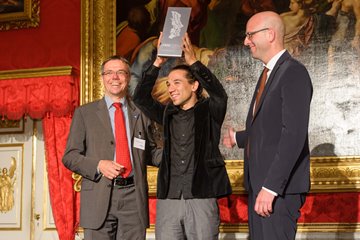 Erdem Gündüz wwas presented the M100 Media Award 2013. The symbolic prize will be awarded in the evening of September 5 at the end of the international media conference M100 Sanssouci Colloquium.

The 34-year old dancer and choreographer became famous worldwide because of his “standing man” (in Turkish: duran adam) performance when he stood for hours on Taksim Square in June while looking at a portrait of the country’s founder Mustafa Kemal Atatürk. With his performance, he became a symbol of peaceful resistance, and his performance found followers all over the world.
The M100 Advisory Board is conferring the award on Gündüz in recognition of his commitment to freedom of expression and human rights and for being a global example of non-violent protest.

Gündüz began his protest on June 17, two days after the second violent eviction of demonstrators in Istanbul’s Gezi Park. “Some people died during the demonstrations,” he said, “What was happening in Gezi Park was for me the turning point when I decided to take part.” This silent protest lasted over eight hours; five hours after beginning, his performance was noticed by a great number of people. At first, civil policemen tried to convince him to stop his performance, then protesters and activists followed his example and joined him spontaneously. They acted completely independently. During the following days, many people in other cities of Turkey and abroad stood silently to express their disappointment and solidarity.

“By honouring Erdem Gündüz with the M100 Media Award, a clear signal is sent again this year that non-violent, peaceful resistance is working. His weapon is his creativity. His hallmark is his courage and persistence. These qualities are needed to fight for freedom of expression and human rights,” comments Potsdam’s Lord Mayor and Chairman of the M100 Advisory Board, Jann Jakobs.

“The coverage of the Gezi protests in Istanbul showed us the strong pressure on journalists in Turkey to sweep criticism about the government under the carpet, concerning the entrepreneurial activities of the media owners,” said Michael Rediske, Spokesman of Reporters without Borders. “With his spectacular performance on Taksim square, Erdem Gündüz demonstrated that even a single man can make his point as a sign for freedom of expression.

Wenzel Michalski, Director in Germany for Human Rights Watch comments: “The silent protest of Erdem Gündüz became a symbol for the right of peaceful protest in the face of the brutal conduct of the Turkish security forces against demonstrators in the Gezi Park. Human Rights watch documented over weeks how the police used extreme measures to try and suppress the protests which had convulsed Turkey since the end of May. The right of peaceful assembly and freedom of expression are fundamental human rights, which are endangered in Turkey. Against this background, we are looking forward to Gündüz being awarded the M100 Media Award for his commitment.”

Erdem Gündüz was born in 1979 in Ankara. The dancer and choreographer graduated from Yıldız Technical University, Faculty of Art and Design, department of Music and Performing Arts in 2007.
He trained in acting and established the Ege University Dance Assembly. He is now concluding his master’s degree at Mimar Sinan University, Department of Performing Arts.