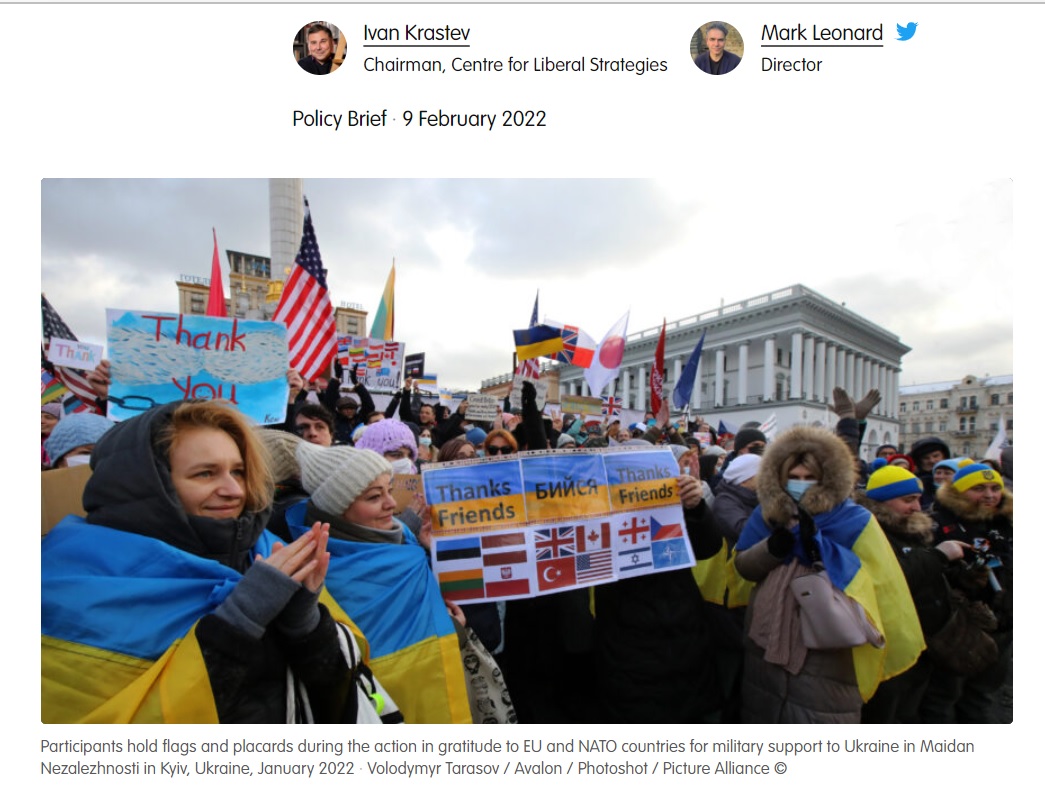 Majorities across Europe expect a Russian invasion of Ukraine in 2022 –  and favour EU and NATO defending Ukraine.

• NATO is seen as the main defender of Ukrainian sovereignty, but Europeans also believe that the EU should stand behind Ukraine in the event of Russian aggression.

• Providing support to Ukraine is seen by many as an acceptable risk, although most people are less committed when it comes to their home country’s role in defending Ukraine.

• According to foreign policy experts Mark Leonard and Ivan Krastev, the coming weeks will show “whether Europeans:in can make the transition from a world dominated by soft power to one dominated by resilience” – and that the popular notion that war is “unthinkable” is no longer true.

Russia’s military activities on the Ukrainian border have caused a change of mood in Europe. Against a backdrop of rapidly escalating tensions, majorities in Europe now believe that Russia will invade Ukraine in 2022. They also believe that the EU and NATO should stand behind Kiev in such a scenario. This is according to a new survey-based report published today by the European Council on Foreign Relations (ECFR).

The survey, conducted by ECFR in seven EU member states, found that European citizens see NATO and its thirty member states as the most important partners in the defence of Ukrainian sovereignty in the event of a conflict between Ukraine and Russia. This attitude is particularly pronounced in the member states geographically close to Europe’s eastern border: Poland, Sweden, Romania and Italy.

The new ECFR survey was conducted by Datapraxis, AnalitiQs and Dynata in seven EU Member States – Finland, France, Germany, Italy, Poland, Romania and Sweden – and further shows that European citizens are willing to accept “major” and potentially long-term threats as a result of supporting Ukraine. These include increased numbers of people fleeing Europe’s borders, rising energy costs, new economic coercion, cyber-attacks and the threat of further military action from Russia.

Overwhelming majorities in almost all states surveyed (Poland 77%, Italy 68%, Romania 65%, Germany 59%, Finland 59%, France 51%) and a clear majority in Sweden (47%) see energy dependence as a security threat to their country in the context of the current crisis. Poland, Sweden and Romania are the countries where respondents are most likely to express the view that it is worth bearing the risk of all the above consequences in the event of a Russian invasion. In France, Finland and Germany, most believe that the benefits do not outweigh the risks.