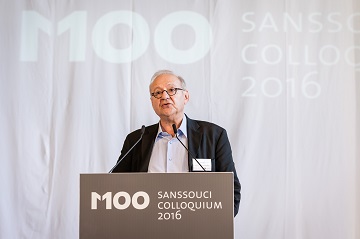 A spectre is haunting Europe – the spectre of geopolitics. It is imperceptibly, almost insidiously taking possession of language and terminology. This kind of semantic infiltration is not without consequences. It goes hand in hand with an intent to shape reality along political lines. The development comes from two, interacting tendencies: the natural restored importance of space as the once important category of time faded after the end of the Cold War, and Russia’s growing determination to use that tendency to display power.

The Cold War was a nuclear-armed, global civil war of values between the powers of political freedom (the West) and the powers of a literal understanding of social equality (the East). The nuclear arms race reinforcing this clash and its ensuing, strategic consequences required swift action, and, consequently, regulated the emerging crises. Almost all of the crises that occurred during the Cold War were of strikingly short duration, including both the Berlin crises in 1958 and 1961 and the Cuban Missile Crisis in 1962. The remarkably short trajectory of these crisis situations was characterised by sudden starts and abrupt ends, along with the nascent logic of looming mutual destruction – the probability of apocalypse. The direct, physical vis-à-vis of the superpowers in Europe, the interface between East and West, paradoxically protected the old continent from “hot” wars, or conventional armed conflicts. Instead they were relocated to the “outside” – to wherever they could be waged short of nuclear war, mostly at the Asian periphery. Both the Korean War between 1950 and 1953 and especially the Vietnam War of the 1960s and 70s were significant in this regard.

The collapse of communism, the dissolution of the Soviet Union and the end of the Cold War saw a remarkable change in the relationship between time and space. It appeared as though space had escaped the clutches of previously dominant time. Afterwards, when the prerogatives of time weakened, essentially freeing space from its subordinate condition, the latter prepared to take the upper hand. Periods of conflict grew sluggish. Movement was conspicuously slow. They were protracted.

Space had no contours in the Cold War era – only a binary-coloured expanse divided into the regional blocs of both sides, East and West. The epochal change saw these same areas dissolve into a multi-coloured, complex relief that evoked historic pasts. The re-emergence of historical spaces seemed to herald a return to the historical periods once associated with them. Memory and geography, united in the modus of time, have a repetitive effect. The conflicts they triggered lasted a remarkably long time.

Increased use of ethnos and geography-rooted political nomenclature first became noticeable in Europe during the Yugoslav wars of disintegration in the 1990s. Even the word “Balkan” evoked sequences of events in historical memory that were clearly tied to conflict situations in the late 19th and early 20th centuries. Russia, which had been deeply shaken by the disappearance of the Soviet Union, promoted a geopolitical reasoning that would give its commonwealth the encouraging prospect of restoring the country to its former imperial power and size. These kinds of geopolitically-motivated ideas evidently accompany Russia’s current politics of keeping its borders porous. It seems the country’s immediate neighbours (particularly to the west) will be kept in a perpetual state of constant anxiety and tension – a new danger zone in Eastern Europe. The area appears congruent with the intermediate historical European zone that extends down from the Baltic Sea to the Black Sea, crossing the Balkans, permeating the Straits and reaching the Levant. It could also stretch to the Fertile Crescent region, if need be. Analogous to the faded indentations of historical Ottoman-Russian antagonism, it could affect Turkey or use a strategy of embrace to bring it to heel. More than anything, Russian intervention in the ethnically and religiously motivated Syrian civil war gives Moscow geopolitical leverage that it uses in a variety of different ways as the country re-enters broader global politics.

The current pattern of political-military activity is directed at locations that bear an unsettling resemblance to hotspots of the 19th century. First, to the constellation of the Crimean War from 1853 to 1856 – the world war of the long century. The era saw significant, long-running conflict around the status of the Bosporus Straits and the Strait of the Dardanelles. So far, there has been no call to revise the 1936 Montreux Convention agreement (which primarily regulates the transit of naval warships into and out of the Black Sea), but if the issue is brought to the table again, then the geopolitical recurrence of 19th century-constellation conflict situations would be ratified completely.
With the Soviet Union shattered and the failure of the expected liberal modernisation project, Russia appears to be on a search for itself. Thus, conflicts the country provokes, brashly adopts or even initiates should be understood as conflicts aimed at furthering a new definition of its collective self, rather than conflicts waged for their own sake. As defining conflicts, they appear designed to last.

Which Russia should it be? A commonwealth clearly enclosed within boundary lines? An empire with roughed-up borders? A continental civilisation that expands far beyond the commonwealth itself? The latter idea is being propelled by an enduring, geopolitical telos struggle with a maritime, ostensibly necessarily aggressive, American-led, transatlantic ‘time culture’ of acceleration. This is to be countered with what is essentially a continental-defensive, Russian-led Eurasian ‘space culture’ of civilizational slowdown.

If this kind of geopolitically-semantisised conflict constellation were to actually solidify, it would raise pressing questions about the future of the European project in general and the role of Germany in particular. This is especially true considering the fact that Europe’s institutional fabric will prove exceptionally soft in the face of hard, necessarily militarised geopolitical thinking, or in any case hardly compatible with that approach. The cohesiveness of the NATO military alliance, which has guarded the European unification process against existential turmoil for decades (Europe was its core power-political construct), seems to be slipping. Germany, whose historical neutralisation was not least set in motion by the European integration process, now enjoys a hegemonic role that is still pending. The country has assumed this role both materially and morally: materially due to its 1990 agreement that, in exchange for the country’s unexpected reunification, Germany would bow to external forces and agree to the early adoption of a common European currency. This had the unanticipated effect that, rather than bind Germany to Europe as intended, the euro imposed the German habitus and German secondary virtues of economy and housekeeping onto others; and morally, because the lessons drawn from Germany’s past became mandatory for other Europeans with different historical experiences and other cultures of memory, also with regard to the refugee issue. All of this contributes to a paradoxical constellation as Germany, like it or not – completely unintentionally and with the best of all conceivable goodwill – has played a part in the breakdown of the European system. The ensuing alienations could cause Germany to detach from its European anchor in order to pursue different options or perhaps go its own way when entering into veritable conflicts.

Such a tendency would suit the Russian-led, geopolitical paradigm shift very well and fit into a traditional, basic European historical structure long believed to be overcome. It was interrupted by the now-dominant role of the United States after 1945, an “Atlantic Revolution” from the west that seized the continent in a development known as Westernisation in Germany. The advent of what could be called populist, nationalist and above all anti-Western movements with an obvious affinity for the conservative values currently emerging in Russia – supporting transatlantic free trade as a commodification of NATO, for example – could prove a first front in a looming, ethnically and geopolitically loaded culture war both within and around Europe. In the meantime, the certainty that other political formations are free of these kinds of temptations is extremely optimistic.