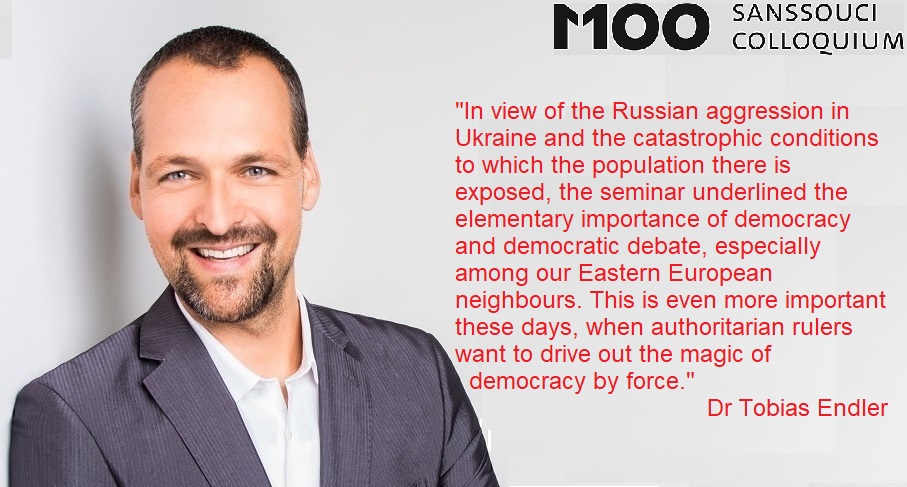 Summary of our seminar with Dr Tobias Endler, Political Scientist and American Studies Scholar, on 17 March 2022:

Russia’s attack on Ukraine and the bloody war that has continued since then had a clear impact on the nature of this seminar. The war is waged not only militarily, but also through the media: informing and influencing the population is an important instrument in the war against Ukraine. The two sides, both the aggressor Russia and the attacked Ukraine, are also fighting a war of words and images, and while one side, Volodymyr Zelenskyy and Kiev’s mayor Vitali Klitschko, motivates the population to fight the aggressor day-by-day through words and images; the other turns away from its people by employing disinformation, bans, cover-ups and suppression.

This made the topic of the seminar all the more timely: What arguments can one use to successfully counter populists? For this, we had to reflect and question the different terminology and the perspectives that are associated with terms such as democracy, society and politics, said seminar leader Dr Tobias Endler.

Do “arguing” and “democracy” even fit together? Endler asked.

And what is “the West”? Can the West be defined geographically or is it more of an ideological metaphor that is about shared values and views? As a geographical definition it has serious limitiations, argued Endler, showing a European-made map of the world – with Europe at the centre – and a world map from the USA, in which the USA is, of course, at the centre – and in which Europe is to the east of the USA.

Does the “West” also include the countries in Eastern Europe and if so, which ones and why? From the American point of view, the “West” also includes Asian countries and Australia, which are not at all associated with the term in the minds of most Europeans. From the US perspective, the distance to Asia is the same as to Europe: there is no national tendency, especially among the younger US generation, to look towards Europe when it comes to international alliancess. And when Joe Biden talks about the West, he also includes Australia making it an alliance of nations that share common values and interests.

It follows that “the West” is more of an ideological metaphor under which countries, nations, people unite who share the same values. Just because one lives in a particular country, it does not mean that everyone subscribes to the same views. In order to find the right arguments in a discussion with populists, it is important, especially for journalists, to reflect on terms like democracy, society and politics and be clear about what this actually means – also in view of different geographical and cultural backgrounds; i.e. which definition, which idea of democracy, society and politics we represent.

Seminar participants had the chance to examine a book resp. an excerpt of this book more intensively: Jason Brennan’s “Against Democracy” (2016), in which he argues that only educated and politically responsible people should be allowed to participate in political processes.

Brennan (who participated in the M100 Sanssouci Colloquium in 2017) divides the voting population into hobbits, hooligans, and Vulcans. Hobbits are ignorant, politically indifferent, naive people; hooligans can be informed in detail, just like fanatical club fans who can list all the players’ biographies. But they are very one-sidedly informed and interested, and because they think dogmatically, they end up being “badly informed” because they are not comprehensively informed. These two groups make up 90% of the electorate, according to Brennan. He calls the remaining 10 % Vulcans, who alone should be entitled to vote in order to effectively fight populists and populists. Seminar participants strongly disapproved of this approach!
According to one of the participants, especially in these crisis-ridden times, life is too complex not to be political in some form. Other opinions included:
If people perceive themselves as not being political and do not participate in political discussions, this could also be a good sign, as for these people everything seems to be fine and there is no reason to get involved politically; Democracy is about citizens having the choice to be political or apolitical, to decide for themselves whether and to what extent they choose to be active. Denying citizens this choice is undemocratic; Another participant offered that a strict division into hobbits, hooligans and Vulcans is not realistic, as people can switch between them depending on their personal/political situation.

Conclusion:
To effectively counter the populists of our time, the defenders of democracy, and above all young journalists, must master their craft: This means, at the very least, having a secure grip on the central concepts and categories of any democratic society – in order to prevent the enemies of democracy from appropriating those very concepts under the guise of freedom of expression and thereby perverting them. And secondly, to give all those in a society who are undecided, disillusioned or lethargic about political and social issues a concrete picture of what is at stake. It became clear in the course of the discussion that on both sides of the Atlantic, open democratic discourse stands more than ever for an open society. It also became clear that democracy needs not only to defend itself with good arguments, it needs to make it its own. This is precisely what makes democracy defensible in the face of its enemies. In view of the Russian aggression in Ukraine and the catastrophic conditions to which the population there is exposed, the seminar underlined the elementary importance of democracy and democratic debate, especially among our Eastern European neighbours. This is even more important these days, when authoritarian rulers want to drive out the magic of democracy by force. In a committed discussion across national borders, the participants of the seminar impressively demonstrated the power of living democracy to counter authoritarian wishful fantasies.

Dr Tobias Endler has published extensively on democracy and public debate, and most recently on the future of “the West” (Game Over: Warum es den Westen nicht mehr gibt). He teaches and researches at Heidelberg University, and has held a Teaching and Research Fellowship at Yale. He is currently working on a book on progressive discourse in Germany and the US. Tobias regularly joins the M100 Sanssouci Colloquium.