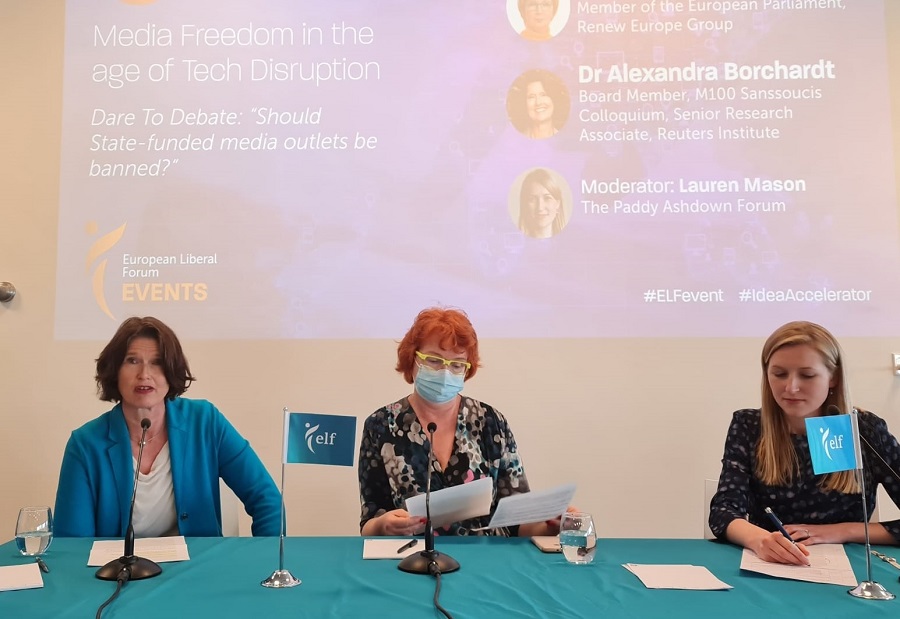 22 April 2022. “Should state-funded media be banned?” was the topic of a debate held on 20 April at the ELF Idea Accelerator conference “Media Freedom in the Age of Tech Disruption” in Brussels. On the podium, which she shared with Yana Toom (member of the European Parliament, Renew Europe), M100 Advisory Board member Professor Dr Alexandra Borchardt (left) made a strong case for public service media. She defended the need to finance media independently of commercial revenues through state finances such as taxes or licence fees in order to guarantee access to reliable information for everyone. There was evidence that independent public service media that strive for impartiality enhanced democracy, she said. They were the best medicine against polarization. And research showed that they ranked highly on trust if people perceive the journalism to be independent.

In her impulse Alexandra clarified that there was a big difference between state media and public service media. State media were more commonly associated with non-democratic systems of government that control editorial staffing and content. “Public service media need to be controlled by the public”, she said.

“Imagine if we only had private media. Think about the social media platforms. Think about Elon Musk who wants to buy Twitter. And maybe he will shut it down because he doesn’t like what he sees. Or Mark Zuckerberg, deciding there is no room for news on Facebook any longer.” It would be more than an unpleasant notion if our digital public sphere was entirely controlled by large private monopolies, Borchardt said.

Public service media were able to deliver on things that private media had increasingly less space to do, she stressed. They had the mission and capacity to go where commercial success was unlikely, for example with fact-checking, certain political or regional journalism. They were required to aim for impartiality and reflect society the way it was, in all its diversity. Borchardt emphasized that it was extremely important though that the conditions were right. Public service media needed to be controlled by governing bodies to ensure the independence of their journalism. Also they had to be held accountable for their performance and success, they were spending public money after all. “State-funded media need to legitimize their existence, too”, she said. “They have to develop formats that serve diverse audiences, particularly young and disadvantaged ones that are underserved by other media.” Using state funds required particular responsibility for fairness, equality, diversity, and user friendliness, she said.

Professor Dr Alexandra Borchardt is lead author of the EBU News Report 2021 – 22 “What’s Next? Public Service Journalism in the Age of Distraction, Opinion, and Information Abundance“