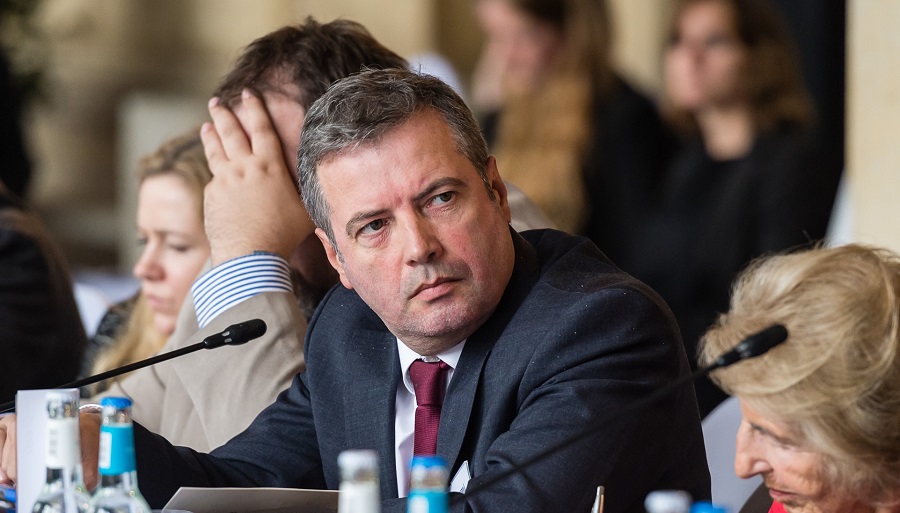 9 November 2021. For ten years, Agron Bajrami, editor-in-chief of Koha Ditore, has been a regular guest at the M100 Sanssouci Colloquium. After 27 years at the head of Kosovo’s largest daily newspaper, he is nominated for Kosovo’s Ambassador to Kingdom of Belgium. We congratulate him warmly and wish him every success and all the best in his new position. He has written for us how he experienced the M100 Sanssouci Colloquium and what it meant to him:

“Over the years – since 2010 – I have had the utmost pleasure and advantage of participating at M100 Sanssouci Colloquium. I have been part of many discussions, held mostly at Orangery Castle, which provided the perfect backdrop for talks on past present and future, with European issues, global topics and democratic principles at the centre of each conversation.

And each time I left Potsdam, I went back home enlightened, with a deeper understanding of issues we were facing, as media as well as societies, here on the edge of Europe and the West – which is where Balkans is, not just geographically.

The importance of M100 Sanssouci Colloquium has increased over the years not only due to timely topics we covered at Sanssouci Castle (and few other magnificent settings), but also because what we have there is a great mix of media, politics, diplomacy and academia, representative of various geographical and political entities of free, democratic world.
Another, very important and quite effective feature M100 delivered and keeps delivering regularly is the M100 Media Award, which has recognized the individuals and entities fighting for free speech and free and democratic societies, such as Bernard Kouchner, Bob Geldof, Kurt Westergaard or Roberto Saviano, among others.

The latest gathering, at Schlosstheater at Neues Palais, where we jointly recognized the work and dedication of Alexei Navalny, was the latest of such steps that make Sanssouci Collocquium so special and important – because it serves not only to pinpoint and address the important issues we face collectively, but also to raise awareness about the dangers and threats to freedom and democracy that we face, and offers a platform to unify all progressive forces in front of what is essentially a decisive battle for the future of liberty and democracy.”