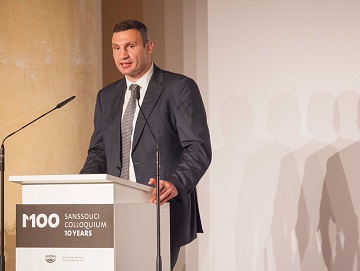 Dear Foreign Minister Außenminister Kurz,
Thank you very much for your words.

There are moments in history which decide the fate of nations. That change forever the people who live together in this country. Twenty-five years ago, you would not all have been able to gather here. Schloss Sanssouci stood behind an iron curtain. Then the Germans took to the streets for freedom in 1989.
In November of last year, the people of Kiev began to take to the streets. And they also demonstrated for nothing other than their freedom.
With my party Udar, the Ukrainian Democratic Alliance for Reform, I have myself for many years been speaking out for democratic values in our country. I could never understand why countries such as Poland and the Czech Republic became so modern after the fall of the Soviet Union while Ukraine missed out. And I was also surprised by the courage and conviction shown by the hundreds of thousands of mainly young people who were suddenly demonstrating with us. How they stood on the Maidan FOR the EU treaty and AGAINST the corrupt politics of Janukowitsch. During the winter, many European politicians said to me: These Ukrainians, who demonstrate there in the freezing cold, represent the values of the EU. They represent the European idea, more so than many people within the EU do now.
It was not politicians who began this revolution. It was the people on the Maidan. And there are more than one hundred dead, known as the holy hundred, who we will remember forever.
You all know what happened next: Annexation of the Crimea by Russia. A bloody war in eastern Ukraine which has already claimed thousands of victims. As Ukrainians our most ardent wish is for peace. It was not us who decided on war, but a Russian president.  He refuses to accept our independence and our desire for democracy. He does not want what I, as Mayor of Kiev have already begun in my city – the fight against corruption and for democracy – to succeed throughout the country. He does not want Ukraine to open up to the West.
We Ukrainians are thankful for the support and solidarity offered by the West. However, we do not feel that this support is enough. We cannot win the battle for freedom alone. We can only succeed when Europe’s politicians make it much clearer that they do not accept Russia’s aggression. Europe’s future is being decided today in Ukraine. If we do not stop Putin here together, no European country will be able to feel safe tomorrow.
Here this evening we represent the values of Europe. To me, Europe means being free and being able to stand up for the freedom of others. I believe the entire European idea is based on freedom. So let us stand together, so that freedom, and with it Europe, will prevail.

Thank you very much!