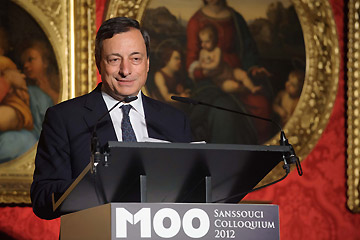 I am enormously grateful to the Board of M100 Sanssouci Colloquium for bestowing this award on me.
It is an honour to be recognised as a contributor to the European project, and to join the company of such illustrious previous recipients. Working for Europe is not only my profession, but also, on a personal level, a driving mission. And in these difficult times – when, unfortunately, we are rarely sans souci – striving to build a strong, united and stable Europe is more important than ever.

I would like to thank Minister Schäuble very warmly for his presence tonight and his very moving speech. Wolfgang is among the most important European leaders we have. Over the past 20 years, he has worked relentlessly to advance the cause of European integration, sometimes against strong resistance.
Wolfgang does not grow weary of reminding us of the benefits of the European project. His deeply anchored aspiration “to think Europe further” – Europa weiterzudenken – has been rewarded with the renowned Karlspreis in May this year. We are privileged to have such leaders as him today.

I also would like to thank Potsdam’s Lord Mayor Jakobs and Mr van Dülmen of the M100 Sanssouci Colloquium for their words and their hospitality and the entire M100 board for their trust. And of course, I would like to thank Paul Achleitner and Luca di Montezemolo for their very kind words in support. You all have been very generous to me.

It is no secret that the course of European integration is currently difficult. The global economy is facing serious challenges. These challenges are not all of Europe’s making, as some observers would have us believe. But Europe is perhaps experiencing them more acutely than others. The reasons for this are complex. But one part of the explanation is clear: the original institutional design of the euro area did not meet expectations.

The global crisis has revealed the vulnerabilities in this arrangement. Loose coordination of policies neither ensures stability nor does it facilitate effective crisis management. The institutional design of the euro area therefore has to be reviewed to put our economic and monetary union (EMU) on a more secure footing. But how should this be done? There are two possible paths. The first is to go “back to the past”, to make the original design work better. The second is to develop a new architecture that properly reflects lessons of the crisis.
In my view, the first path is not viable. We have seen that the euro area is too interconnected for economic and financial policies to be a purely national responsibility. We must find ways to guarantee that national decisions do not harm other members of the monetary union. In the event of a crisis, there should be effective mechanisms for crisis management. And where necessary, this means going beyond coordination, because this is a matter of europäische Innenpolitik.

We have also seen that maintaining stability requires common institutions that can react to events. The euro is the world’s second most important currency. It makes up 25% of the world’s foreign exchange reserves. 1.5 trillion euros are traded daily on the world’s foreign exchange markets. And it is used daily by the 330 million citizens of the euro area. A currency that plays a central role in the lives of so many people has to be managed with effective decision-making.
The second path, designing a new architecture, is therefore the only way forward. The key challenge today is to present a vision to Europe’s citizens of what this would entail – which is precisely the theme of this conference.

Together with the Presidents of the European Council, the European Commission and the Eurogroup, I have been given the task of working on such a vision for the next decade. We have aimed to be as pragmatic as possible: to establish what are the minimum requirements to make the euro function to its full potential. And our conclusions are both realistic and attainable.
Member States will have to pool more sovereignty in selected policy areas. This is a clear lesson of the crisis. But we will not need to cede all powers to Brussels. Sovereignty will only be pooled where it is essential to ensure a stable and prosperous monetary union. This will be accompanied by broad democratic participation and legitimation.
Our vision for EMU has four pillars – fiscal union, financial union, economic union and political union. Progress on all four should be made simultaneously. The first three pillars will help to steer fiscal, financial and economic policies in a sustainable way. They will also help to create institutions commensurate with the degree of monetary integration in the euro area.
But today I would like to focus briefly on the fourth pillar, political union. This pillar is essential for engaging euro area citizens more deeply and making the other three pillars legitimate.
Some observers argue that because of the common decision-making implied by the other three pillars, political union has to come first. I do not agree. Political integration can and will develop in parallel with economic integration. Over the past 60 years of European integration, this has always been the sequence.

For example, public engagement with euro area issues has naturally deepened through responding to the crisis. To commit money via the European Stability Mechanism, Member States have had to explain the responsibilities of euro membership to their citizens. Parliaments are now taking a sharper interest in European affairs. Closer economic integration has de facto strengthened democratic engagement.
But this does not mean that we should not strive to strengthen democratic participation in Europe further. Democratic engagement already takes place through the Council of Ministers – where citizens are represented by elected ministers – and the European Parliament – where citizens elect their MEPs directly. But more has to be done to make the voice of Europe’s citizens heard. We need what in Germany is called demokratische Teilhabe.
And this is where you are needed. I would like to ask all of you – journalists and publishers but also policy makers and academics – to help to develop a genuine European public space, eine europäische Öffentlichkeit.

Most of us in Europe are exposed mainly to our national media in our national languages. These media naturally define our perspective: our sense of the “public” tends to stop at national borders. But this no longer describes reality. What is happening in other Member States matters to all of us. Problems that cross borders require citizens to find consensus around common solutions.
Again, the crisis is itself having an effect. For example, newspapers in some countries now take a keen interest in the welfare systems of other countries. Citizens closely follow the elections of ministers they would previously have never heard of.
Certainly, there is an unwelcome side to this related to the potential for reviving outdated national stereotypes. But there is also a positive side insofar as it leads citizens in the euro area to develop a sense of belonging together and to care about decisions in other regions.
One way to strengthen this trend would be to exchange more media between countries. And here I would like to invite your contribution.
Could you consider, for example, publishing what we might call “imported pages” from foreign newspapers? This would allow citizens to get a better sense of how issues are seen in other countries; it would increase cultural sensitivity; and it could generate Europe-wide debates that divide along policy lines rather than national lines. Over time, such debate would help to put European decision-making on a more legitimate footing.

“Imported pages” are but one idea, a starting point. It is with your dedication and creativity that more such ideas can be developed. It is a privilege to be part of the European project, for citizens and journalists alike. But it is also comes with responsibilities, for citizens and journalists alike.
Ultimately, a genuine European public space is essential for supporting the long-term vision of the euro area. Citizens need to be in basic agreement that, within a monetary union, certain economic models are no longer possible. They must understand that there are limits to national discretion in economic policies that affect the area as a whole. In other words, there needs to be a new consensus on economic policies that will reinvigorate the European social model and make it fit for the 21st century.
This is a discussion we must begin today. Setting EMU on a path towards stability is essential so that we can move permanently beyond the crisis. It will send a clear signal to citizens and financial markets that the euro area is committed to staying the course. And it will remove any grounds for doubting the euro’s future.

There are many reasons to be optimistic that Europe will find this path. The pattern over recent decades has always been to move forward towards a stronger and more united Europe. When we have faced challenges, we have invariably found solutions. Those who have predicted the worst have turned out to be mistaken.
What’s more, the solutions we need do not require extreme approaches or impossible choices. They require a structured and achievable path towards completing EMU. This is fully within our reach today.

I am confident that one day I can return to this beautiful historical setting sans souci.
In the meantime, I am most grateful for your support.
Thank you once again for this award and your kind words tonight and thank you very much for your attention.