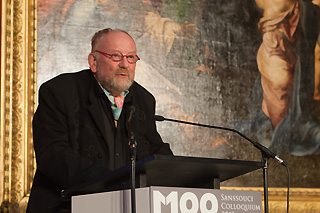 Thank you very much! It is a great honour for me to
be here and receive this great price.
It’s a very big day for me.
I thank Federal Chancellor Angela Merkel and
Dr. Joachim Gauck for the kind and strong words, and for their appreciation. Thank you, I will never forget this day!

A cartoon is an idea with a line around it. The idea should, preferably, be so clear that the communication with readers is swift. A cartoon is a product that has a life span of only one day. Afterwards, the situation is different and the cartoon may have lost its news value. Then a new idea with a new line around is required. But sometimes a cartoon concerns itself with a subject that is, apparently, eternally topical. For example freedom. If there is one thing which people in the global village disagree on, it is freedom. I have experienced nazism, communism and fascism, and now islamism. And all these -isms imply fanaticism. There are many different sociological and geopolitical analyses of the nature of fanaticism.
Simply put, I perceive a fanatic as a person who has rejected one of the most constructive, and also the most difficult, feelings – namely doubt. In the political ideology, or in the darkness of religious obscurity, people stick together closely and the direction one has to go in is indicated solely and undoubtedly by ideologists, or perhaps religious authorities.

Let me recount a little joke which I think, for the time being, will not be considered politically correct in my homeland, Denmark. Not in certain circles anyway. In a Middle Eastern country, very hostile to the West, they had finally constructed a missile that could reach the West. On the day of the launch, however, it was unable to take off because there were so many people clinging to it wanting to go to the West, too.

In any case, a lot of people have come to Denmark. Many of them – most of them – have come with an honest desire for integration and a better life in Denmark. Others have arrived with religious and cultural explosives in their baggage which can threaten our social order.

There were several cultural institutions in Europe that closed down, or removed artefacts which could potentially offend Muslims. In this regard I wanted to show that religion has a variant that is cruel and threatens with murder and terror. I made this cartoon and I was right. From near and far, threats came pouring in to kill me and blow up my newspaper Morgenavisen Jyllands-Posten. The powerful collision between democracy and religious fundamentalism, where the cartoons have been the catalyst in is, I think, a necessary process which should, preferably, get new Danes to understand the conditions on which this society relies and functions on. From several groups within the ethnical Danish society, especially among the intellectual, elitist Denmark, there have been protests about this action. I would call it ”appeasement-cultural-relativism”. But appeasement policy has never been successful against totalitarian world views. For me it has been meaningful to stand up against the totalitarian point of view, in spite of all the threats.

As a satirist I have not, until now, found a better base to work off on than the old Picasso-anecdote, I have repeated several times, but I will do it once more this time: in 1937, during the Spanish civil war, General Franco, the rebel general, had Nazi-Germany as his ally and therefore Nazi-German planes were sent to the Basque Country. They destroyed the little town of Guernica. Subsequently, Picasso created his painting and later that year it was shown at an exhibition in France. When France was occupied, Picasso met a German officer who asked him “Was it you who did Guernica?” “No,” Picasso answered, “it was you.”

None of the last five years have been an annus horribilis for us, my wife and I. But rather, years when very strong emotions have struck our lives. Contempt, curses and threats from one side; great and warm sympathy from the other side. It has been very nice to receive a pat on the back from the ethnic Danes in the streets. But there were also rude hecklings from Muslims in the streets saying I will “burn in hell”. When I politely asked them “Could we talk about it?” there was no interest in this. So, I started saying “Ok, let us talk about it in hell.” This has not been a progress. My fundamental reaction of being threatened was with anger. And anger is a very good, active feeling when dealing with threats. It is as if you establish some kind of mental defence. I’m not a man of violence, but I need this mental defence and I have been able to establish it.

Finally, a few words quoted from my newspaper Jyllands-Posten where the cultural editor Flemming Rose wrote the following lines which I would like to make my lines. It was a special address to our new Muslim citizens: “These images in no way exceed the bounds of taste, satire and humour, to which we would subject any other Dane, whether the Queen, the head of the church, or the Prime Minister. By treating a Muslim figure the same way we would a Jewish, or Christian icon, we are sending an important message – you are not strangers. You are here to stay and we accept you as an integrated part of our lives. We will satirise you, too, and you must understand that this is an act of inclusion, not exclusion. An act of respect and recognition.”