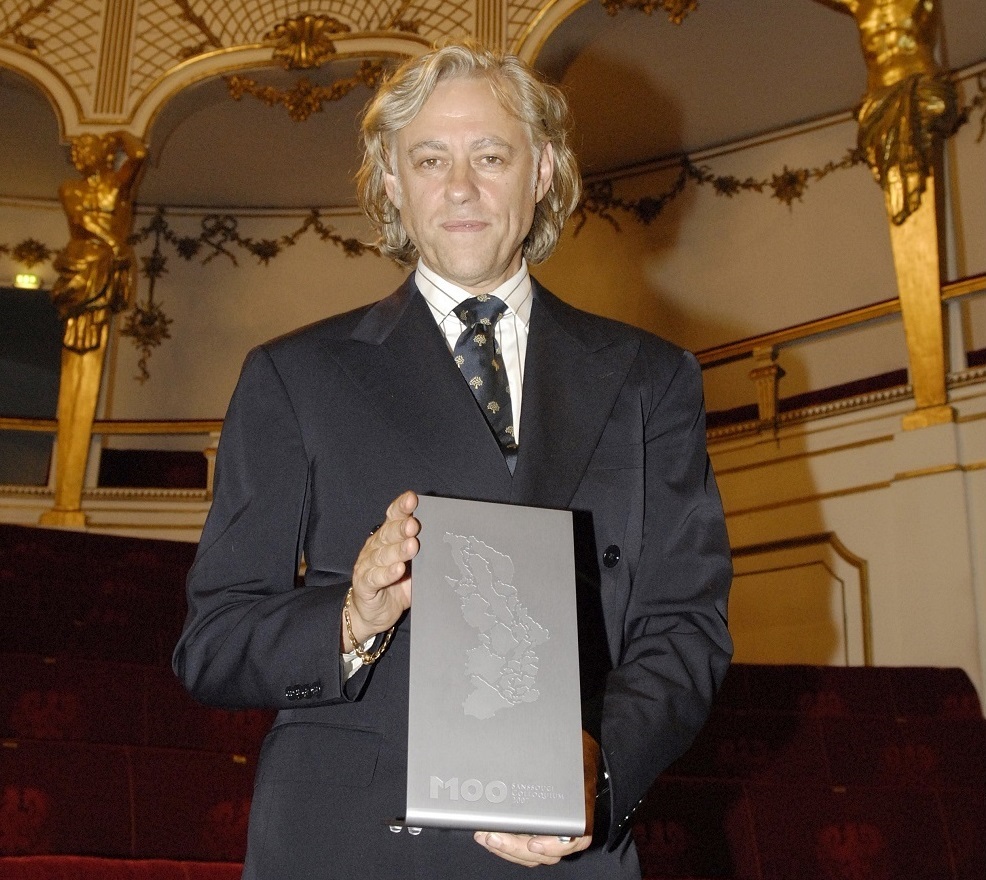 I am a child of the media age, so this is a great honour and I am very flattered. I think you are particularly flattered if you get something from people you consider your peers. And I have been in the media business a long time, sometimes as a singer and sometimes writing for Giovanni (di Lorenzo) and Kai (Diekmann) and other people. But what happens in this Colloquium will become more important as the years go by. This year you’re discussing an East-West dialogue and some journalists asked me, would I prefer a North-South one.

Globalisation, in its modern form, is a result of the media age, which happened in my lifetime. When I was a boy, my father stood me out in the doorway of our house in Dublin. And we looked up at the sky and watched a little silver ball go across the sky and we turned up the radio very loud and we listened to what this satellite had to say. And the satellite said beep, beep.

When I got to my teenage years, there were young men talking about change in the medium of rock ’n roll. And those two things, satellites and the lingua franca of the planet which is not English, but rock ’n roll, became very useful in the 1980s, when through the media again I learned about an event that I consider to be a criminal act, which was the imminent death of 30 million people in a continent 12 kilometres from ours, who were dying of want in a world of surplus.
(…)

And this little story started then, and since then I have been allowed to use the great international web that is the media world, all its satellites, all its journalists, all its papers and, as Minister Schäuble talked about earlier, the web. And I want to now thank specifically the German media for what they did this year in this great and important German year.

When we arrived to begin the campaign for the German G8, the reporting of Africa was at a very base-level. It was concerned with the pornography of poverty and hopelessness. It was concerned about the horrific images of the dying.  And it changed over the course of the year. We visited all the papers, we rang the editors and said: “There are other stories. This is a great continent. Poverty is the denial of human potential. Unleash that potential and we have an explosion of culture, thought, trade. We are failing to unleash the potential of an entire continent and that does us no service.”

Germany, this year, will become not the first export market economy of the planet, but the second. China will overtake it. And the largest growing Chinese export market is, of course, Africa. Why? Why did you allow that to happen? What is it that the Chinese understand, that Germany doesn’t? They can compete with you on price, but you can compete on proximity. Why is Africa always exotically dark or impoverished?

Well, over the course of this year you began to change your perception and with that the perception of Germany. Now, for me, the G8 was a great disappointment. We mobilised the artists, we mobilised the journalists. We mobilised the schools. And for Germany, there was a great result nationally. Chancellor Merkel was able to bring your budget for development assistance from way behind to closer to where it should be.

But Germany was unable to persuade, to the shame of the other countries, the rest of the G8 to join its great effort. That wasn’t the Chancellor’s fault. I got to meet her several times, got to know her a little bit. I found her direct and honest. And I think if more could have been done, it would have been done.

But we now come to the rest of this G8 year. Germany still leads the G8 and we’re coming up to the replenishment conference for the Global Fund for Aids, Malaria and TB. Now, this is an entity that’s accountable, you can trace every cent to where it’s going and where it’s going, ladies and gentlemen, is to the worst affected areas of Africa, suffering from those miserable chronic diseases. In 2002 50,000 people were treated for Aids. Right now over a million are being treated out of a total affected population of 5 million. This is a great success story.
(…)

Right now the Global Fund is struggling to meet its commitment from Germany, amongst others. This is again the time where Germany should take the lead. It’s got nothing to do with political correctness. It’s to do with what a country committed itself to, not in the name of any political party, not in the name of any individual politician, but committed itself to in the name of the people of Germany. And that is why, if you break that commitment, if you break that promise, it dishonours the people in whose name it was made. And it kills the people it was made for.

Then in December, we go to the EU-AU summit in Lisbon. Portugal is EU President and I will be with Prime Minister Sócrates on Tuesday to discuss the EU agenda. Now it is ridiculous that a not very successful pop singer is discussing with the Prime Minister of Portugal and the President of Europe what should be on the agenda. The unfortunate problem for journalists is that I also happened to be a fucking expert on these matters. But I am. 24 years on you get to know quite a bit about it. And Germany should take a lead here as well because this is an extraordinary moment for Africa. Commodity and resource prices have never been higher – another reason why China is in there. Why isn’t Germany, why isn’t Europe?
(…)

In forty years, I guarantee you, there will be German businessmen on a constant path up and down to the states of Africa. Get there now. Where is the German finance industry with all the hedge funds, with all the equity funds? Where are you in the emerging markets? Why aren’t the reporters talking about that? Of course, we’re fascinated by success and money and growth. The story is down there, you’re missing it. The country is missing it and this continent is missing it. And it is apt that you’re discussing East-West, as Bernhard Kouchner said last year: The only threat to the world is poverty. It isn’t North-South, it isn’t East-West. It’s poverty. What you’re discussing is a fall-out from those who have no voice, who are disenfranchised, who want to get on but who cannot. Can we resolve it? Yes, of course. Poverty empirically can be resolved. It’s not some bien-pensant nonsense. This can be done. And that’s what’s frustrating.

But we’re here with our colleagues from the Middle-East. What’s their part in this? Well, very little. No doubt, you are talking about open journalism. Where is it? When Arab men kill other Arab men, when Arab men rape Arab women, where are you? The Arab League seems to have a point of view of everything on the planet, except Darfur. Aids: 600,000 in the Middle-East, I’ve never seen this reported. They are the figures. What is your Aids budget? Eh…, we don’t have one. The last figures available are from the year 2000 and they are pathetic.

We are looking at some of the richest states in the world. Saudi Arabia promised the Global Fund to give their fair share. They’ve given ten million dollars in the course of three years. The German contribution in the fair share is four hundred million. Saudi Arabia gave ten over three years and Kuwait made a one-off payment of a million dollars. And yet in Yemen malaria is rampant and it’s spilling over into Saudi Arabia. Who is dealing with that? The Global Fund. Whose money? Ours.

And yet Saudi Arabia one of the richest states in the world; they are OPEC. They are not transparent, their governments are not accountable and they should be. And I believe that’s the job of the press.

Ladies and gentlemen, I was thinking how I just finish up briefly. When you go out into this world you do possibly stand chastised for being politically correct. I just see it as politics. Correct or otherwise, I don’t care. And you do stand the possibility of being extremely boring. Which, I admit openly, I am. But you do go into it with the sense of commitment in the full knowledge that something must be done, whether it’s the moral imperative, the financial imperative, the political imperative or simply out of self-interest.

Something must be done. And towards that we must lend a sense of commitment. And as I am in Germany I’ll quote from the little bit of Goethe I was taught when I was school in Ireland: “Whatever you can do, or dream you can, begin it. Boldness has genius, magic and power in it.” So let’s begin again. Thank you very much.