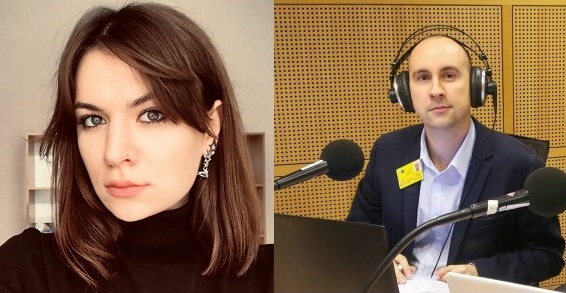 16 February 2022. Today, the Romanian public radio station Radio România Iași, which broadcasts to the Romanian region of Moldova and is also available in most parts of Moldova and parts of Ukraine, published an interview with the deputy editor-in-chief of the National Public Broadcasting Company of Ukraine, Olesia Tytarenko. Olesia Tytarenko as well as the interviewer Lucian Bălănuță are alumni of M100 and have participated in Young European Journalists Workshops.

The telephone interview conducted in English can be found on the website of Radio Iași (at the end of the text translated into English here):

The United States and the European Union have been working to de-escalate the situation in Ukraine amid an increased Russian military presence on Kiev’s borders. Today is the deadline put forward by a number of Western intelligence services as a potential day of military intervention by Moscow. German Chancellor Olaf Scholz and Russian President Vladimir Putin agreed that the dialogue must continue after talks in the Russian capital yesterday.

Last night, US President Joe Biden said that a Russian attack on Ukraine remains a strong possibility, even though Russia has announced that it is withdrawing some of its forces massed on the neighbouring country’s borders. Moscow has denied the war scenario, saying through the voice of leader Vladimir Putin that it wants to continue negotiations with the West on European security and defusing the Ukraine crisis. Meanwhile, the State Duma in Moscow has voted on an appeal to President Putin for Russia to recognise the independence of the two separatist regions in eastern Ukraine, Donetsk and Lugansk.

In an interview with our colleague Lucian Bălănuță, Olesia Tytarenko, deputy editor-in-chief of the Ukrainian public broadcaster’s news desk, talked about the pulse of Ukrainian society at a time when the line between reality and exaggeration has become difficult to identify.

Lucian Bălănuță: What are the main challenges facing journalists these days when there is increasing talk of a potential war involving Ukraine?

Olesia Tytarenko: These challenges are not new. Because, as you know, the war has been with us for almost 8 years, since 2014. The challenges have remained the same. Of course, we were not used to work under these conditions. Of course, this military mobilization of Russia around our borders has led to a change. For 3-4 years we felt the results of the war, but not so intensely in terms of the messaging, the weaponry deployed and the Russian forces deployed. The feelings are not the same. You probably know that in Ukraine there are many foreign journalists observing the situation and it is different than in 2014. Of course, Ukraine has been analyzed, people have been talking about it, but now it is so intense and we feel support not only from specific people in the United States, Europe, Canada, but also from journalists. I know that about 300 journalists want to go to the war zone, close to the front line, but very many are still waiting for a special permit, because it is difficult to manage such a situation there. Also, while we are talking about journalists, we have to be very careful about fact-checking, misinformation and potential fake news because we are also in a state of hybrid warfare, not just conventional warfare.

Lucian Bălănuță: What is the Ukrainian media reporting about the tensions between your country and Russia?

Olesia Tytarenko: Everything. Everything, but this is a problem, because now our main sources are Western ones, when we talk about moments of possible invasion – CNN, BBC. At least we did. Now we are very cautious because it caused panic in society and we are cautious about publishing. In terms of topics, of course the diplomatic visits that are going on in Ukraine. Also the official information coming from the Ministry of Defense, from the army about the number of Russian soldiers deployed on our borders. And there would be the internal situation. Whether there are provocations, whether there are cyber attacks on our systems, on government websites. We’re using all the sources we have available to us, but we have to be 200% cautious because we’re not just responsible for sharing information, especially as people are worried about the future and what’s next.

Lucian Bălănuță: How do the Ukrainian authorities see the ongoing diplomatic developments between Russia, the US and EU member states?

Olesia Tytarenko: I would divide this support into two different groups. We are talking about a transatlantic group, led by the US and including the UK, Canada. They support us with arms and different forms of financial assistance and we feel safer after such help. If we talk about the European group, which includes Germany and France, apart from the fact that they refuse to support us with arms and are often not specific about aid, we have some concerns. As regards the relationship with important partners, Europe (Germany, France), the United States, Canada, I would say that it is not a problem, but with a little nuance in the Ukrainians’ view.

Lucian Bălănuță: Where do you think Western democracies should insist more in these negotiations?

Olesia Tytarenko: We know that if Russia invades Ukraine, Western states will impose sanctions. But only if Russia invades Ukraine. For example, if Russia continues the hybrid war inside our country, attacking sites, the banking system, causing panic, massing military forces along the borders, then it will not be held responsible for this. This is worrying. We would like Russia to be held accountable not just after the attack, but before it is planned. If we are talking about the Minsk Agreements, the decision of the State Duma in Moscow to ask President Putin to recognize the separatist republics of Donetsk and Lugansk, then we would like the West to react, and it has already started to do so. If President Putin decides to recognize these republics, we want Western states to help us and respond.

Lucian Bălănuță: What is the overall assessment and what are the associated preparations of the Ukrainian military in this regard?

Olesia Tytarenko: The concept of war and war itself are not new issues for us. We have been in constant preparation. We had this financial and military assistance coming from the United States and Canada, also from Lithuania and Latvia. There have been many partners on our side. In terms of military mobilization, I would say that we are ready and certainly without our partners we would not be so sure. As for the pulse of society, I would not hide the fact that people are thinking of moving closer to the western border, to the city of Lvov. Several private companies, particularly foreign ones, have relocated their offices there. You certainly know that embassies, the United States, Australia have moved their headquarters to Lvov, and for at least two weeks they will be working from there. What is interesting and in contrast to the position on arms deliveries, the European Union embassy has remained in Kiev and decided to express its support in this way. For the Ukrainians this means a great deal. We want not to panic, to live our lives normally, but when we see other countries evacuating their citizens and embassies moving to the West, it is worrying. It affects the way of life; the economic and financial activity of the country and we would not want that to happen.